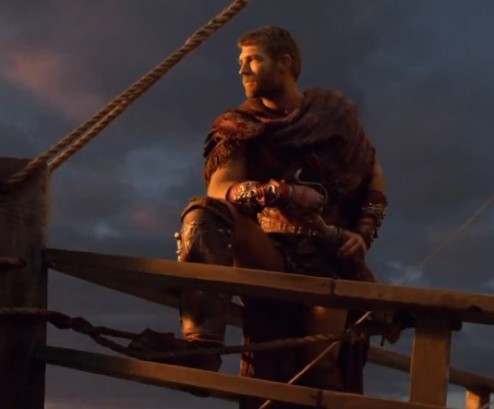 Surrounded on land and at sea by Crassus’ forces, this week’s Spartacus crams two episodes worth of content into a single outing. The results of this decision are interesting if somewhat problematic.

Spartacus releases Sinuessa’s remaining Romans to the vanguard of Crassus’ army. The tension between Crixus and Spartacus nearly comes to a boiling point, only to fade into the ether once Spartacus reveals his master plan to use disinformation against Crassus. Unfortunately this gambit is made somewhat pointless when Caesar betrays the slave army just in time to have Crassus’ ram break through the city gate.

So, what just happened?

Granted it has been a while since I’ve watched any episodes of Blood and Sand or Vengeance, but Blood Brothers is likely one of the most dubious episodes of the entire series. It wasn’t terrible, mind you. Yet when we compare this episode to the four that preceded it, it’s hard not to notice the forced march rapidity with which plot holes are synched in favour of bulldogging the story forward.

Allow me to annotate the major developments which manage to occur in a fifty-one minute episode. The breach between Spartacus and Crixus, which sees Agron reaffirming his loyalty to Spartacus, just in case, fizzles in the face of common foe. Spartacus raids Sicily and returns to Sinuessa seemingly within the span of a day. Crassus buys the allegiance of the Silesian pirates, despite the fact they ever appear docked in Sinuessa or at sea with members of the slave army on board. Crassus mobilizes a fleet; though I suppose this could be Pompey crossing the Tyrenian from Spain. Caesar turns on Nemetes and gets into a prolonged fight with Agron. And finally, Crassus assaults Sinuessa’s gates. This is a considerable amount of content crammed into an episode which still makes time for a romantic sex scene and a rape – more on that later.

Not to pick nits, but this whole Sicily thing really bothers me. Let’s go to the map.

As seen in William R. Shepherd’s 1923 Historical Atlas, Sinuessa sits almost directly west of Capua along the Via Appia (red line leading to Rome). Sailing in a straight line, which is quite impossible without a compass, from Sinuessa to Messina, the northern and eastern most Roman city in Sicily, is a journey of approximately 350km. Getting from Sinuessa to Messina while keeping close Italy’s coast, which is the only way to sail in the Classical era, is a trip of roughly 450km.

Let us assume that Spartacus’ ship caught a good wind both ways, the boat does not appear to have oars befitting a bireme or trireme of the era, and maintained a steady seven knots, or 13 kilometers per hour. Even a perfectly straight course from Sinuessa to Messina, which they couldn’t do anyway, would take twenty-six hours. Under the best possible and most improbably circumstances, that’s two days of travel time and at least a half day to pillage.

Time compression for TV is all well and good, but asking the audience to believe that Spartacus disappeared without notice for three days is a bit much. By rights, this sea voyage should have encapsulated its own episode. Doing so would have allowed for a visible moment of treachery from the pirates. Now’s the pirate’s betrayal is just a convenience rather than the back breaking moment we saw in Kirk Douglas’ Spartacus.

The tedium of tactics

Spartacus’ plan to move on Crassus appears as nothing more than a random assortment of words and checkers moving about an otherwise meaningless map. Granted the scene is supposed to convey Spartacus as a tactician akin to Crassus himself, but the vapid strategy session proved pointless with the arrival of Legionaries aboard the pirate ship and the Roman assault on the gate.

In the aftermath of all this chaos, a few questions of continuity emerge.

Wasn’t Crixus supposed to be off leading the fight outside of the city? How did he end up at the port just in time to save the day? What’s this ridge people keep talking about? I thought Sinuessa was a walled city, which should effectively trap the slave army in one place. Spartacus has seen characters catch their foes out of position before, but rarely has the series ever left me outright dumbfounded as to how something happened. The best laid plans of Thracians went to hell without any real explanation.

We could chalk this uncertainty up to the realities of war. Spartacus is a fighter playing at general; whereas Crassus is a general commanding a professional army in field manoeuvres. Perhaps the audience’s confusion is intentional as a means of demonstrating the chaos of war. I know, it’s a stretch, and I don’t really buy that myself. More likely the pacing is an attempt to shoehorn a fortnight’s intrigues into a single episode as a means of transitioning us from the first act to the second.

Then things get uncomfortable

I knew things were going to get weird when Kore tells Crassus that she will approach Tiberius and attempt to mend fences between father and son. I mean how could they not? What I did not expect was whiny little Tiberius’ testicles to descend in such a profound way. And I have to give credit to Jenna Lind and Christian Antidromi, they handled the scene remarkably well. Its positioning after the episode’s tender lovemaking between Crassus and Kore made Tiberius’s assault all the more chilling a thing to witness.

I know some of my colleagues in criticism question if rape scenes should be depicted in any form of fiction. Despite the awful reality of sexual assault, I think this fictionalized depiction was well handled. First and foremost, it didn’t marginalize the crime or sensationalize the act. More importantly, the rape was done with narrative purpose. After questioning who is worse, Romans or Rebels, over the last few weeks, Tiberius’ actions are a visceral reminder of what slavery actually represents within the Republic. Kore who is Crassus’ collarless equal in the boudoir is nothing but a thing to Tiberius, a means of settling accounts with his father. This may not justify Spartacus’ ongoing bloodshed, but it at least reminds the audience how some Romans treat their slaves.

The arrival of an envoy from Rome was a chance to focus on the political wranglings of the Republic. Granted we learnt that Pompey, who history records as stealing Crassus’ glory in the aftermath of Spartacus’ defeat, is on his way from Spain. This revelation, however, need not have come directly from Rome. Furthermore, why bother bringing the political fallout of Crassus decimation into play only to ignore it for the rest of the episode? Even if it promises future intrigues for the back nine of the season, the gesture was all but lost amid the rest of the episode’s frantic pace.

Similarly the quarrel between Agron and Nassir is getting tired. Point in fact, Agron’s being written as a petulant child. He has the wisdom to side with Spartacus against Crixus, for all the temporary symbolism the gesture was worth, but when Nassir says, “Seriously, nothing happened,” Agron acts like an idiot. The worst part is I can see where this bickering is going; Nassir is going to die. There will be more tension and drama, then a deathbed reaffirmation of mutual love. How do I know this? Because it’s exactly what happened last year with Mira and Spartacus.

When the slaves destroyed Capua’s arena at the midpoint of Vengeance the writers gave Spartacus, as a series, a 9/11 moment. If hemming Spartacus in by land and sea is a similar attempt at raising the stakes, it fell flat. The abundance of exposition and info dumping amounted to absolutely nothing by the end of the episode. For all the plans of Crassus and Spartacus, the end game proved overly simplistic. It’s a noticeable deviation from the elegant game of cat and mouse the two have been playing for the last five weeks.

Moreover, I fear that the series remaining episodes are going to be hamstrung by a similar linear direction. Spartacus isn’t simply besieged, he is about to be breached. His only salvation rests in a Deus ex Machina, which can do nothing but prolong the inevitable tragedy. It is going to take writing forged with equal measures of cleverness and poignancy to make these last five episodes something other than a depressing exercise killing off primaries in a build up to the “I’m Spartacus” moment.