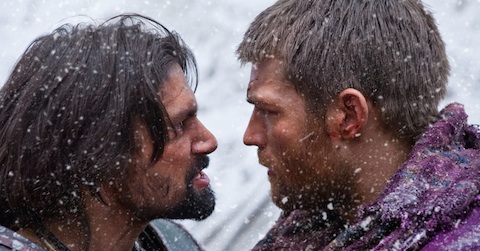 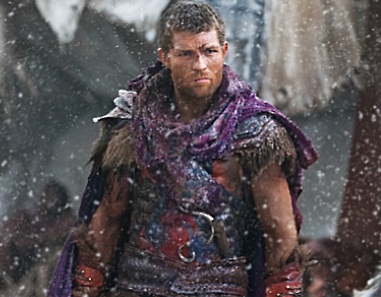 Where Spartacus’ retreat from Sinuessa could have stagnated the plot, Mors Indecepta presents game changers which might just allow Spartacus to defy his destiny.

With the rebel army trapped between Crassus’ wall and his approaching army, tensions once again flare between Spartacus and Crixus. While Crixus favours a head-on attack against Crassus, Spartacus struggles to find a strategy that will outfox Rome’s tactical genius.

Meanwhile a thousand rebels die from exposure as a bitter storm ravages the cliffs above Sinuessa. Facing death on all fronts, Spartacus uses the frozen bodies of his dead companions to bridge the Roman trench and assault Crassus’ wall, which when pressed reveals itself to be garrisoned with only a small force of legionaries. The rebel army then flees into the wilderness, accompanied by Kore, who has seemingly abandoned Crassus after learning she was to remain in Sinuessa as Tiberius’ head of household staff.

At this point in the series, there’s only one thing I want to know: is War of the Damned going to keep faith with Roman history, or at least history defined by Stanley Kubrick – which might as well be history after 60 years of pop culture ubiquity – or will it do something unique with the Spartacus story?

With Spartacus and the rebels escaping through Crassus’ wall, Pompey and his legions could easily turn this potential win into bitter defeat. Though the series has made mention of Pompey, we’ve yet to actually see him, and there is no record of the Magnus on the series’ IMDB page. Why then do I bring him up? In history, knowledge of Pompey’s arrival in Italy put significant pressure on Crassus to decisively end Spartacus’ rebellion. If the writers are keen to ignore Pompey’s contribution therein, what other elements of the recorded or adapted history might they eschew? Maybe some of the rebels will get out alive? Perhaps the name of Spartacus will die, but not the man we know as Spartacus himself. Remember the name was foisted upon the ex-legionary Thracian after he survived execution in Capua’s arena.

Of all the things to happen in this episode, Kore’s defection is as fascinating as it is unexpected. It also stands as another big hint that Steven DeKnight might be out to tell his own interpretation of Spartacus, unbound by Kubrick or the infamously prejudicial Roman histories.

Given the physical and emotional wringer Tiberius has visited upon Kore, it’s quite conceivable that she would play Caesar as a means of escaping a life of rape and humiliation with Tiberius. But if that was the case, why not slit Crassus’ throat while he slept? If she knows he won’t save her, what use is he to her? Does she love him that much? Or is something else at work?

Perhaps Kore’s plan is to cement a relationship between Crassus and Caesar as a second Trojan Horse. Once triggered, all Caesar has to do is manipulate the situation to make Tiberius look like an idiot (not a difficult proposition) and return Kore unharmed to Crassus’ side. Kore would then be free of Tiberius once Caesar supplants the boy as Crassus’ right hand.

A twist like this also this has the potential to make up for an entire season of enduring Naveia’s victim-turned-psycho routine. An elegant symmetry emerges when we recall that Spartacus’ reason for fighting, first with the Romans as an Auxiliary and then against them as a rebel, was his wife; the idea of another woman, equally righteous in her cause as Spartacus, catalyzing the downfall of the Bringer of Rain offers a bloody sort of balance to the story’s long arc.

Crixus vs Spartacus Round…who the hell is counting anymore?

Gods of the Arena – Crixus and Spartacus hate each other. Mutual distain gives way to begrudging respect, followed by an alliance of convenience.

Vengeance – Crixus is Spartacus’ yes man and best bro for the whole season.

War of the Damned – Best bro status continues until Crixus starts killing civilians. Spartacus and Crixus fight, then make up, and now they are fighting again. Of course, who wouldn’t want to fight if they got a mug broken across their face?

Seriously though, the double alpha dog thing is getting a bit over played. They either need to kiss each other, kill each other, or find a way to disagree without all the machismo BS getting in the story’s way.

For all of the Spartacus v. Crixus tension, it never seems to amount to anything. We all thought it was going somewhere in Blood Brothers but instead the tension petered out and left us right back where the season started. I’m glad to see the writers doing more with Manu Bennett this year than they did in Vengeance – can’t have the fan favourite showing up the new guy who is replacing the dead guy – but this is not the way to give the character more screen time. Now it just seems like he’s the show’s Mr. Worf, whose only function is to put forward ideas which get summarily shot down by King Spartacus.

In a perfect world, The Doctor will walk out of the TARDIS and take Nassir and Agron two-thousand fifty years into the future where they can have their own spin-off series. Seriously, I would watch the hell out of that show, and I say this as a white heterosexual male.

I’ll also thank whatever gods you care to name for the writers putting Nassir’s and Agron’s jealousy sub-plot to rest. The conflict between the two characters felt like a forced gimmick designed to increase the stakes of the show. Since neither of the characters died in the immediate aftermath of their tiff, I question the purpose of setting them at odds in the first place. Though if somebody told me they fought just so we could have the
“don’t give me that look” moment, I’d be okay with it.

If it’s cold enough to kill a thousand people in one night, then there should be a lot more frostbite among the rebel army. Last I checked they were all wearing sandals. I’ll be disappointed if we don’t see some black feet next week.

Crassus’ Mors Indecepta trick involved a lot of talking about the legion’s “Praetorians.” While this might sound good and Romanesque, it’s a mistake. Republican Praetorians were a small contingent of a legate’s bodyguards. Killing them would not breakdown the leadership of Crassus’ army. Killing all the army’s Centurions, however, would have done some serious damage to the legion’s overall effectiveness.

My biggest fear going into Mors Indecepta was the series setting itself up for another drawn out finale a la Vengeance. Mea culpa. Now we get to witness the continuation of Spartacus’ game of chess with Crassus. The question must now become, who will be the new piece on the board. Will it be Kore? Will it be Pompey? Or is the Spartacus versus Crassus battle going to play out independent of external factors?