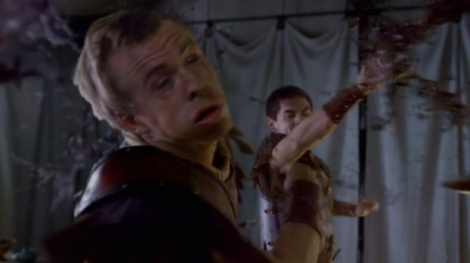 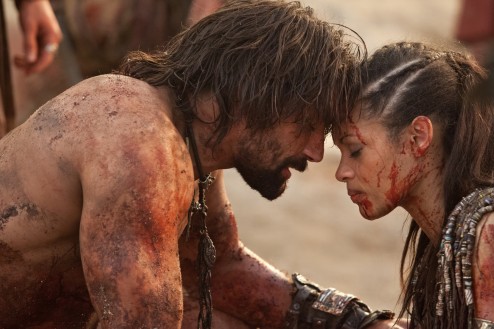 Spartacus and Crixus part ways not with a mug to the face, but through the bonds of brotherhood. Crassus, blinded by Kore’s betrayal, must choose between protecting Rome or chasing Spartacus north toward the Alps.

People die and the future is foreshadowed in a powerful episode of War of the Damned.

What do you say about a character like Crixus? I always had the impression there was more to Crixus than was ever revealed. Who was he before being enslaved to Batiatus? He speaks about the nature of war in this episode like a man experienced in its ways. Too bad we will never find out.

Certainly, the forty-three year old Manu Bennett has been a stabilizing force within the series. I suspect many people kept with the show during Liam McIntyre’s first season because of Crixus’s Gallic charm. Though he was never quite as clever as Spartacus, Crixus’ personal transformation was no less poignant. And in Separate Paths we saw the final step in his evolution: General Crixus and Crixus, the man who would be a father.

“A child born into piss and shit,” says the cynical Gaul as he sits encamped, watching a mother feed her newborn son. Therein we witness a profound sense of loss emerging from Crixus. He knows nothing of a world absent fighting, yet he longs for a quiet life. What follows is some of the best dialogue Crixus has ever uttered in the series, and Naevia almost comes across as likable, almost.

For all the handshakes, reminiscing, and affirmations of brotherhood, I think it quite obvious the writers wanted us to know this was the end for Crixus and Agron (maybe). However, rebranding him as “Crixus the Undefeated” might have added a shade too much hubris to the whole ordeal. I mean, didn’t Crixus sort of lose against Theocales?

On a technical level, I have to object to the means of Crixus’ death. I’ve thrice watched the video after Crassus gives the order to take Crixus’ head, and each time I am convinced that the sword’s path would put it nowhere near cleaving head from neck. I know, I know, it’s tedious to complain about technical details, but this is Crixus we are talking about.

Watching his head fly from neck as reflected in Naevia’s teary eyes is a fun picture-on-picture effect, but the death of a titan should not be marred by any imperfection. Crixus’ death deserved to be flawless, thus allowing viewers get lost in the tragedy of the moment. Instead, I found myself complaining about fight choreography and the series’ habit of using a gladius for slashing rather than stabbing.

Turn Your Head and Cough

I’ve said this before but it merits repeating; Spartacus never fails to impress me with its treatment of sexual assault. Where the series revels in the heady bacchanal of consenting adults and simultaneously shines an uncomfortable light on the icky nature of class based sexual obligation, it is at its best when illustrating the dehumanizing power of sexual abuse.

First and foremost, Tiberius forcing himself upon Caesar is no more or less horrifying than when he violated Kore. Though I suspect male-on-male rape is certainly more shocking for the audience, at least outside of a prison movie, the writing is smart enough not to make an extra big deal out of the scene. It’s not a gay rape scene, it’s just a rape sequence.

This reality is best seen in the equal ramifications visited upon Kore and Caesar in the wake of Tiberius’ action. Kore bore both emotional scars and a physical fear of contact after being raped. In Caesar’s case, he is left unable to perform as a soldier befitting his station. He bears a physical reminder of the ordeal, which strikes at the core of who Caesar is as a Roman soldier.

This brings us to an interesting crossroads. Will either Caesar or Kore reclaim lost agency by avenging themselves upon Tiberius? If Tiberius dies at the hands of another, he leaves his rape victims to deal with the long-term psychological damage of his actions. Given the series’ penchant for comeuppance, I doubt things will end so easily for Tiberius.

The Bringer of Rain, No More

Given that Spartacus very literally escaped the ridge above Sinuessa upon the backs of his fallen comrades, I can see why he would turn pragmatist and make for the Alps. The realization is written across McIntyre’s face, though the character never says it: the rebels are beaten. The cause of ending slavery in Rome is an impossible one. This episode witnesses the death of General Spartacus and the true birth of King Spartacus, for what is a king’s first obligation if not to protect the people who follow him.

What then are we to make of Spartacus tumble with Laeta? Is it just an excuse to give an otherwise celibate Spartacus a sex scene this season? I’m sure Mira and Sura aren’t waiting to kick his ass in the afterlife for going to bed with a Roman. I guess we’re also supposed to forget that Spartacus put a spear through the back of Laeta’s husband’s head, as well. What sort of ex-wife goes to bed with the guy who killed her husband? Here I thought the house of Atreus was dysfunctional.

After witnessing this scene I have a sneaking suspicion we might get an ending along the lines of Kubrick’s Spartacus.

While Liam McIntyre and Anna Hutchison may have been a study in forced chemistry and ersatz passion, Dan Feuerriegel and Pana Hema-Taylor nailed it in their farewell. Seriously, the scene was magnificent and heart breaking. Agron’s need to fight reminds us that he is equally a warrior and a man who failed to protect his brother during the initial uprising at Batiatus’ ludus. In sending Nassir with Spartacus, he is doing for his lover what he could not do for his brother. The act is touching, but over the long-term might end up tasting like ash if Crassus or Pompey massacre Spartacus’ remaining troop.

A Study in Futility

Either in the next episode or the one to follow, somebody is going to ask about the point of the rebellion. This question will likely be followed by a high minded speech on freedom. We, as an audience, are going to be left with the same question. Is there a point to fighting a hopeless cause? Can anything ever be changed in the world? The potential for allegory is limitless when put in the context of something like the Occupy movement.

In sending off two of the series’ primary cast, Separate Paths does much to setup this fundamental question. The answer will depend greatly upon who dies in the weeks to come. Will this be a narrative of heroic sacrifice or will it be a cold reminder of the implacable nature of history? No matter how much we may want a happy ending, sometimes everybody dies.