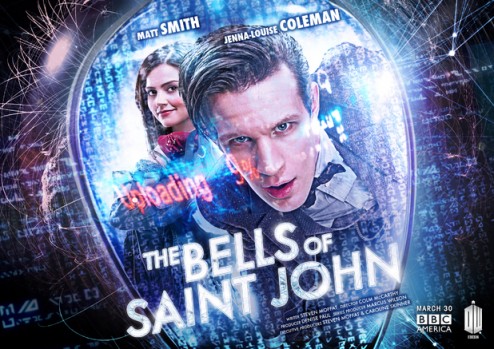 For want of a new episode of Spartacus this week, I thought it only fitting to put together a few words on the return of Doctor Who. As is ever the case with Doctor Who’s revival, I expect The Bells of St. John rung true for as many viewers as they sounded discordant. For me, the episode was a beacon of hope amid a seventh season mired in the heavy handed pathos associated with the departure of Amy Pond (Karen Gillan) and Rory Williams (Arthur Darvill) as the Doctor’s companions.

In broad strokes, I saw The Bells of St. John as a much improved version of the 2006 episode, The Idiot’s Lantern. In the aforementioned Mark Gatiss episode, a one-off alien calling herself “The Wire” – she looks nothing like Omar – uses television to suck the souls of people in 1950s London. “The Wire’s” endgame is to employ cheap televisions and the pending broadcast of Queen Elizabeth’s coronation as a way of eating all of England’s essence. So, television makes zombies out of people, how timely.

The Bells of St. John, written by Steven Moffat, works along similar lines as The Idiot’s Lantern while adding a few more culturally resonant layers to the story. It begins with an almost Torchwood-esque warning from a stranger about something living in the world’s wireless networks. In the pre-credit scene we witness people connecting to wireless networks with seemingly alien identifiers. When a person signs on to one of these mystery networks they become a target for surveillance and a potential consciousness download into a human data cloud. The Doctor stumbles upon this mystery when Clara (Jenna Lousie Coleman) calls the TARDIS’ public call phone, thinking she has reached tech support – hence the Bells of St. John.

Despite the convenience of the Doctor’s reunion with the third iteration of Clara “Oswald for the win” Oswald, this is a reasonably clever episode.

Buried beneath the idea of brain hacking people through wireless networks is a poignant discussion on privacy in the digital age. Though one mis-click puts us in no immediate danger of getting our brains downloaded like so many cheap Cylons, the idea of free wireless networks acting as malicious entry points into a person’s computer is quite conceivable. This potential breach in a seemingly safe digital space becomes a conceptual seed from which the episode’s broad fiction grows. Such an approach gives the mid-season premiere a measure of speculative fiction legitimacy. Yes, there’s a bit of jargon and obligatory sonic screwdriviering, but standing just to the left and right therein is a decent bit of storytelling. Maybe it’s not the best spec-fic in the world, but it’s certainly a demarcation from the science = magic = hand waving = ‘shut up and accept it’ methodology I’ve come to expect from recent Who entries.

Further, I continue to be impressed with Clara as the Doctor’s sidekick. One of my wish-list characteristics for post-Pond companions is a broadening of the “Ubiquitous Earth Girl” template. Classic Doctor Who offers no shortage of extraterrestrials joining the Doctor in his adventures; whereas the revived series has always played it safe in terms of using the companions as contemporary gateways into an alien universe. Even though Clara mk. 3 is of modern London, her past iterations have been a Victorian nanny and an assimilated Dalek. She’s still somewhat an UEG, but I’m willing to let it slide in this case if only because she is more than a dough eyed girl who falls in love with/runs away with the Doctor.

It’s also worth mentioning that Clara is the first companion in recent history that has done anything better than the Doctor on the first try. Even though her hacking skills are the product of a partial upload into the human consciousness cloud, she still manages to outdo the Doctor. It will be interesting to see if this singular talent branches further into the writing.

My concern emerging out of this episode is the reveal of the “client” behind the human aggregation firm as the Great Intelligence. Though I enjoy the call backs to classic Who, I’m somewhat worried about how this portents the broader trajectory of the season. Moffat’s long-game writing has burned us in the past with telegraphed endings and ultimately pointless gimmicks half-resolved through the magic of Deus ex Machina. I’m a little too suspicious to write off witnessing the Great Intelligence in both the Christmas Special and the mid-season premiere as random chance.

Theory: The Great Intelligence has been manipulating Eleven since his regeneration. The cracks in the universe, the Silence, the alternate Doctor of Amy’s Choice, and everything else has been calculated to make the Doctor ask the ultimate question on the Fields of Trenzalore as a means of turning all life in the universe into pure thought, upon which the Great Intelligence will assimilate us into some massive gestalt…or something.

This may not be a bad way to go. Life, the very thing the Doctor holds most precious, could become his ultimate undoing.

My verdict: In a season which has been hit-and-miss, at best, The Bells of St. John is equally satisfying as a piece of short and long-term story telling. The allegory resonates within a culture that is both obsessed with its own digital privacy and concerned, at least on the fringes of tech culture, with the physical implications of wi-fi on the health of humanity. Freed of the Ponds and their perpetual drama/bungling as plot devices, I have hope that Steven Moffat is going to do something extra special with the remainder of this season.