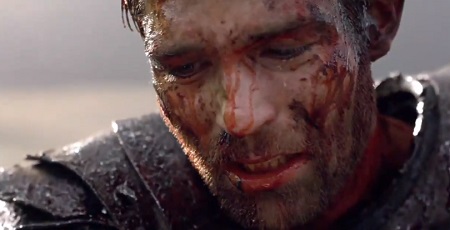 As the title card flashed the single word “Victory” on screen, I immediately asked myself, “Victory for whom?” Who could possibly call himself a winner in this version of Spartacus’ legend? Could anything other than inevitable Roman glory triumph in the wake of Spartacus’ rebellion? For all the memorable aspects of this episode, and there are many, my take away has to be the way in which the acting, writing, and directing all came together to play with the audience’s almost certain quixotic hopes for historical revision.

NB: I’m going to try to limit my discussion of Victory to the episode itself. Next week I have plans to talk about the broader implications of the season and the series as a whole.

In the broadest possible sense, I think this was the ending that Spartacus fans deserved. Victory walks a very fine line between the competing forces of the series’ sensationalized interpretation of Roman history, the tropes of a modern soap opera, and the demands of literary tragedy. Balancing on this high wire act produced a heretofore unseen sense of tension throughout the episode. Arguably a huge contributor to this edge-of-the-seat phenomenon came from the knowledge that any of the characters we have come to care about over the last four years could have died within the span of fifty-five minutes. In such a state, every line becomes a potential final word, each scene a potential grave yard. And anchoring almost every moment therein was Liam McIntyre.

This is not to suggest that Liam McIntyre hasn’t been on his game all season, but in this episode he inhabited Spartacus as if the character had been his all along. One of the episode’s many heart wrenching scenes saw the freed slaves offering gratitude to Spartacus. There was no clichéd extra suggesting he speaks for the group when he says (insert 3rd act gimmick here). They simply said, “Gratitude, Spartacus.” For McIntyre’s part, he reacted as if the words were a kick to the stomach. It’s the soul of poignancy to see King Spartacus thanked by his people, knowing they may well die despite everything that has passed.

Gratitude: a word uttered by John Hannah, Lucy Lawless, Simon Merrells, Todd Lasance, and every other actor playing a Roman. It is a word used so frequently among the Romans that it carries all the impact of a quick “thanks” offered to a clerk at a burger joint. Yet when “gratitude” passes from the lips of extras and third tier characters to a man whose name isn’t his own, the word finds new meaning.

As I said before, the episode lives at the intersection of powerful writing, acting, directing, and hope.

On the meeting of Spartacus and Crassus I could likely write a thousand words. For the sake of this review I’ll content myself with a hundred. Nowhere do we better see the literal “War of the Damned” theme come to a head than in this meeting. So much of the scene is carried in subtext and body language, culminating in a handshake between worthy foes. The two men are captives of an idea, and that idea is called Rome. Spartacus’ war was against the nation which sanctioned the rape and murder of his wife and reaps the daily labour of tens of thousands of slaves. Crassus is the living embodiment of that nation. He can no more let Spartacus honourably withdraw from Italy than he can forgive Kore for her betrayal. Both Spartacus and Crassus end the war damned tethered to their fate by the idea of Rome, regardless of if they can find a respect for the other.

And then, the dominos begin to fall. I admit I took no joy in the end of Naevia. Even though I’ve been a critic of how the writers managed her character, she demonstrated enough growth last week to make her death a bitter affair. Gannicus is another character who I detested in Gods of the Arena, if only because I was firmly in the “You’re not Andy” camp at the time. While I wish the writers would have found something more interesting to do than have him shack up with Sybil mid-season, his vision of Oenomaus and the arena amid crucifixion was a moving piece of closure. Similarly, Saxa’s death was a heartbreaking thing to watch. Even with the scant dialogue she received over the last two years, the Conan-esque sensibility Ellen Hollman brought to the role made the character’s death meaningful.

But what of Spartacus?

In the moment the spears hit him the audience is taken back to Crixus’ death. Yet, I won’t deny some peace of mind when it happened, despite the timing which only TV is capable of delivering. With a pilum through his heart, Spartacus would die quickly. The Romans could put him up on a cross, but he would not be Kirk Douglas, crucified along the Via Appia. It would have been a fitting death if it had ended there. Instead, the only functional couple the series has ever seen, who just happen to be a same-sex couple, pull him off the battlefield.

Yet it is not a deus ex machina. What follows is the writers’ last assault on whatever dam the audience uses to maintain composure during moments of tragedy. In Spartacus’ final minutes we witness him finding peace in two distinct ways. The obvious is his impending return to his wife in the afterlife. Beyond that, and left unspoken, is the answer to the series’ ultimate question: what is it all for? Even with Pompey rounding up a number of freed slaves who broke for the Alps, the others who waited for Spartacus secured their lasting freedom by being in the right place at the right time. Thus proving even Jupiter can’t rain piss and shit on everybody all of the time.

Laeta, Nassir, Agron, Sybil, the mother and her newborn child, and all the rest who make it to freedom justify Spartacus’ belief in the cause of life. Marked by a red serpent, the series comes full circle with a shot on Spartacus’ grave.

I don’t use the word perfect a lot in my reviews, but considering what the series began as, what it endured, and what it turned into this year, Victory was a perfect ending to an imperfect story. Where Stanley Kubrick gave us a tragedy without end, Steven DeKnight offered us a literary tragedy, where death informs the life that survives in its wake.

Tune in next week when I talk about the series as a whole, historical revision, and what I see as the enduring nature of the Spartacus Legend.