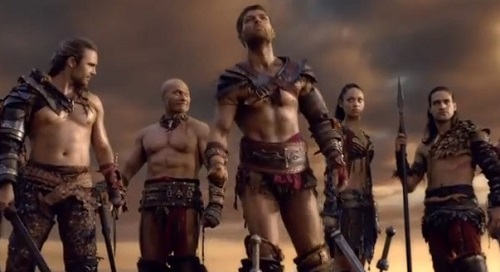 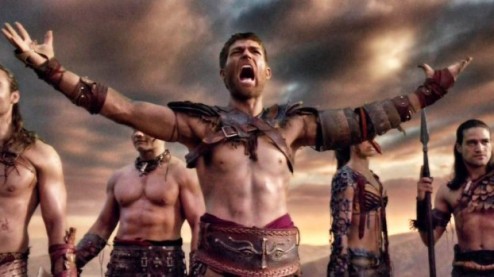 It’s never good to impose too much upon one’s brain the day after returning from a sci-fi convention. In that spirit, I do so hope my readers will forgive me if I diverge from the usual pattern for these reviews and instead focus a mere two aspects of this episode that I think were perhaps more important, though less grand, than Crixus’ glorious funeral: Naevia earning my respect as a character, and Kore as possibly the bravest character in the series.

I’ve always been quite direct with my thoughts on Naevia as a poorly written character in the aftermath of her removal from the House of Batiatus. Where do you go with a character who revels in base bloodlust and PTSD manifesting as a good ol’ fashioned case of the crazies? Absent Crixus, who was both an enabler and restraint for her issues, I expected Naevia to turn into a berserker. Instead, the writers let her find some wisdom in grief.

Sure, Naevia is willing to participate in Spartacus’ games, slaying the captured Romans to commemorate the honoured dead. On a side note, the funeral pyre scene will likely become one of the series’ most iconic scenes. However, Naevia also confesses her sins to Spartacus before the spectacle begins. She willingly admits that she steered Crixus against Spartacus on a number of occasions. When Spartacus lays the decision to spare Tiberius’ life in exchange for five hundred wounded rebels – captured in what I’ll now call the Battle of Rome – at Naevia’s feet, she embraces the greater good and turns Tiberius over to Spartacus.

At this point in the series I don’t know if these few actions are enough to redeem her character. The writers have spent the last two seasons doing seemingly everything they can to dehumanize Naevia in the eyes of the audience. However, the character has certainly offered enough growth in one episode to make her almost certain death in next week’s finale resonate with some level of tragedy.

For the episode’s big win we must turn our attention to Kore. Bound up in the internal politics of the House of Crassus, Kore has been one of the most abused characters of the season, if not the series as a whole. Tiberius raped her not because he wanted her for himself, as Ashur did Lucretia, but to find a way to hurt his father. She then fled from Crassus but was unwilling to slit his throat as he slept. This episode sees her come full circle, stabbing Tiberius as he was on his way back to Crassus’ camp. And before we can have a chance to revel in Tiberius’ death, Spartacus has to come along and remind Kore that five hundred men will now suffer for her righteous desire to reclaim agency against a boy who reduced her to less than a slave. So much for the audience’s catharsis.

But wait, what is Kore’s first act as a newly empowered character? Before the blood on her hands has had a chance to dry, Kore offers herself as a trade to Crassus in place of his slain son. For the sake of his own political fortunes, Caesar plays along with the ruse, legitimizing Kore’s return to her former master. And in the scene that follows we witness the power of a name.

Upon revealing Kore to Crassus, Crassus says, “Thank you, Gaius.” Crassus doesn’t thank his Tribune or the name of House Caesar, placing family name before the individual; Crassus thanks the man before him. Crassus thanks an equal.

Reunited, Kore steps forward and utters a quiet “Marcus” before Crassus roughly embraces her. Yet his first words to Kore belie any emotion his act might suggest.

“From here on you will address me as Dominus.”

Whatever agency Kore gained in killing Tiberius, whatever justice she crafted for herself, the dead prostitute in the follower’s camp, or even for ass raped Caesar, Kore loses as Crassus reduces her to former station with but a word.

Is there another character in the series who has done so much for so many people at such a great personal cost as Kore? As if to make her choice all the more poignant in its tragedy, Kore’s actions fit perfectly with the theme of the season. Kore took one life then offered her own to save five hundred. But will be there a point to it? Are those returned to the rebel army anything but soon to be corpses and crucified bodies at the hands of Pompey and Crassus? Might not Kore also end up on a cross despite doing the right thing? Once again we see there are none truly righteous in the War of the Damned.

With the emergence of Pompey as another piece on the board, if not a character in his own right, any hopes I may have secretly nurtured for an alternate history ending are as dead as Crixus. Realistically, with the undefeated Gaul dead, is there any other place for Spartacus to end up but upon a cross? Save for perhaps a scant handful of minor characters, next week is likely not going to end well. Regardless of what happens, though, we can at least take some satisfaction in a iconic send off for Crixus and unexpected growth for Naevia. What a shame Kore’s good deed is being appropriately punished.