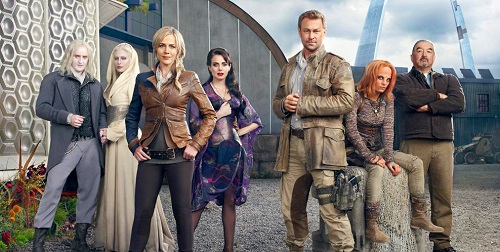 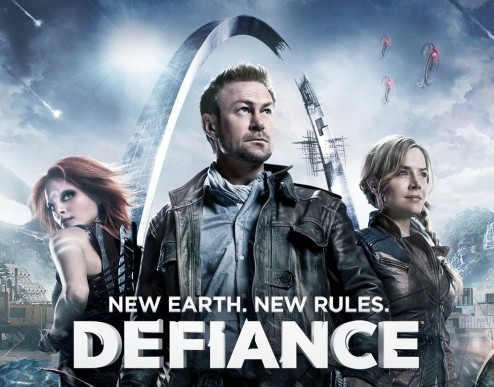 Let’s be blunt. Despite reports that it’s getting better, Defiance sucks as much if not more than it did when it first premiered. It sucks harder than a Tim Taylor souped-up vacuum cleaner. It sucks more than a black hole that’s so big it eats other black holes for breakfast. It sucks more than Twilight. (Okay, maybe that last one was a bit harsh. Sorry, Twilight, you don’t suck as much as Defiance.)

Defiance is quite possibly the worst bit of television SyFy has produced in the last decade. Yes, I’m calling this the worst thing on a channel that gave us Sharktopus. At least with Sharktopus they didn’t drop a hundred million dollars like a lead weight.

The sad part is, it could have been glorious. It could have been a show to captivate and draw me in. I love sci-fi Westerns. I’ve been a Browncoat from the very first episode of Firefly. Heck, I even enjoyed Cowboys & Aliens. I was inclined to like Defiance from the beginning, but it has sinned early and often.

Chief amongst Defiance’s sins is lazy writing. It’s as if the writers’ room opens up TvTropes in a browser window each day and asks “What can we steal from today?” The characters they’ve created are all stereotypes: from the gruff lawman to the evil robber baron, from the dutiful homesteader wife acting as mayor, to said mayor’s sister, the prostitute with a heart-of-gold.

Now don’t get me wrong, there’s nothing wrong with stock/stereotype characters. They can be a great starting point for characterization, a foundation to build upon, but five episodes in and Defiance has failed to even pretend its characters have any depth.

Let me illustrate this by comparing the gruff lawman, Joshua Nolan, played by Grant Bowler, with Malcolm Reynolds, played by Nathan Fillion. Both are former military men, Nolan a Marine and Reynolds a Sergeant with the Independents. Both have daughter figures in their lives, Nolan with Irisa and Reynolds with Kaylee. In fact, one might say that Nolan shares a lot of similarities with Reynolds, perhaps too many? (See what I mean by lazy writing.)

The main difference between the two is that by the end of Firefly’s first aired episode, The Train Job, we had a decent idea of who Malcolm Reynolds was and could tell this was a character with depth. The very end of that episode, when he kicks Crow into the running engine, was a wonderful, if brutal, character-defining moment. It is a perfect example of showing rather than telling.

Five episodes in and Defiance has failed to give Nolan anything close to that kind of moment. In Firefly’s first episode, one that was quickly revised to serve as a pilot after Fox nixed airing the proper one, Whedon and co. were able to define the characters’ relationships and bring across the idea that these were complex, real people. It wasn’t perfect, and the show hadn’t quite hit its stride, but it did more in one episode than Defiance seems capable of doing in an entire season.

At this point it no doubt sounds like I’m writing this as an excuse to praise Firefly and bash Defiance. Honestly, the two shows are cut from the same cloth and comparisons between them are inevitable. Both feature ensemble casts and both occupy the same genre stomping grounds. Defiance, however, lives in Firefly’s shadow and has failed to do anything to break out of it, which is another of its sins.

A prime example of this is the last episode I watched, and likely the last episode of the show I’ll ever watch, The Serpent’s Egg. It featured two different plot lines (and this will be part of the next sin I illuminate), one where Nolan and the lady mayor, played by the lovely Julie Benz, are on a transport/stagecoach that’s robbed and another where Nolan’s daughter Irisa ties up and tortures a man she believes tortured her as a child. Hmmm…sounds like a mash-up of The Train Job and War Stories to me. First off, there is no good reason for the mayor to be on the transport. We are denied even a half-hearted attempt to explain her presence. It just happens and we’re expected to accept it. Hoookay. Next, Irisa kidnaps and hides a screaming man in the middle of Defiance, not that far from populated areas, and then tortures him until he confesses he was the one who tortured her as a way of proving she was the “Chosen One” ( this is a whole other matter that could be a rant in and off itself, but then this article would be five times as long, so I’m just going to let it go).

Sigh. The stagecoach robbery is pretty much standard fare for Westerns, and in this case not much is done with it. Nolan and the mayor are put into danger and find they can rely on each other. Yawn. Already been done and it doesn’t add anything to their relationship. On the flip side, the torture scenes are just as boring and predictable, but become truly disturbing when you realize Irisa is a deputy of the law. Not only does she get away with it, but by the end she has another deputy convinced she was right to do it. Then they have sex. (No, I’m not making that up.)

So here we have two standard plots that really don’t do anything towards building or revealing characters and also feel lifted from other sources. Oh, joy. This ties into another of Defiance’s sins. In nearly all of the episodes aired so far there have been multiple simultaneous plots to the point where none of them are given enough time in the spotlight. The torture plot from The Serpent’s Egg could have been a wonderful character building/establishing moment for Irisa and her relationship with Nolan, like War Stories was for Wash, Mal, and Zoe in Firefly. This could have been the character driven episode I’ve been craving from the very beginning, chock full of moments that show rather than tell me who these people are and why they love each other. Instead it fell out of the air like a lame duck because the stagecoach plot took vital time away from it.

The sins already mentioned could be mitigated if the actors in Defiance were up to the challenge. They’re not. It’s not only a failure on the part of the cast, it’s a failure on the part of everyone involved in producing the show, and there is no excuse for it. Firefly proved that it’s possible to get top-notch actors to play genre roles, and I highly doubt that hiring them broke the bank for Fox. Defiance, however, has failed to attract the same level of talent and/or failed to provide that talent with a level of writing that could allow them to shine. Looking at the cast list on Wikipedia I can see some familiar names, people who’ve been around genre works before, but no big names. It’s obvious that very little cash was put into finding competent much less good talent.

Defiance final sin relates back to the lazy writing and multiple plots, but I’m going to let it stand on its own. As I’ve mentioned, the show fails to show rather than tell, and this has been apparent from the pilot onwards. Reading the Wikipedia entry on the show reveals a great deal about the world of Defiance and how Earth has changed, as well as providing a plethora of background material on the races. Almost none of this appears in the show, or if it does it’s introduced in the most ham-fisted way possible. The audience, namely me, should be captivated by the world the writers’ have created, but instead I’m bored and irritated.

And in spite of all its sins, Defiance has secured a second season. I could blame this on a deal with the Devil, but the truth is that the genre audience is hungry for a show like Defiance. We want something high-concept with aliens, technology, and a world unlike anything we’ve seen. We want shows with heroes and villains living on bold new frontiers. We thirst for them so much, like a man wandering the desert, that we’ll drink just about anything no matter how foul the taste. That is the secret to Defiance’s current success, and as soon as someone comes along with a cleaner, more refreshing drink I have no doubt Defiance will be tossed aside like the dirty ditch-water that it is.