A few nights back I saw my first TV spot for The Purge, a near-future semi-dystopian home invasion thriller from sophomore director James DeMonaco. For your viewing pleasure, here’s the feature trailer.

My initial reaction came along the lines of, “is this an adaptation of some Stephen King novel/short story?” For those who don’t know why I would ask such a thing, a few months ago I found out that apparently everybody in the world except for me knew that King wrote The Running Man. Since there is something of a lowbrow King-meets-Atwood vibe coming off the trailer, I thought it best to double check. A quick IMDB search proves that The Purge is both written and directed by DeMonaco.

With that settled I found myself having a hard time suppressing my rage at the creative bankruptcy which this movie would seem to employ in its ruthless appropriation of Star Trek TOS’ Return of the Archons. Therein Kirk et al beam down to an ideal human society freed from violence and crime, except for during a twelve hour “festival.” During the festival, assault, arson, (implied) rape, and murder are just some of the events a visitor to planet Beta 3 can look forward to enjoying. So congratu-fucking-lations, Hollywood. All this movie needs is a super computer running society and your journey to the dark side will be complete. 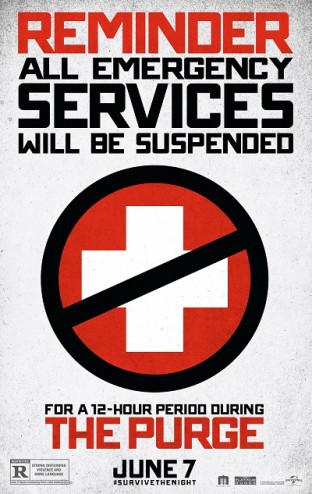 In tone, the trailer’s first twenty-five seconds seem intriguing. The world goes from our contemporary mess to some waspy-suburban paradise. Seriously, where are the black people?

We then flash to the big reveal; this American utopia is only possible through an annual night of no-rules. Ethan Hawke then spells it out for us, just in case we couldn’t figure out what was happening from the title cards and the surveillance camera footage. I think somebody needs to go back to first year creative writing class and learn why showing is better than telling. Also, the kid’s name is Johnny? My god these people are white.

Moving on, Lena Headey reminds her children, who are obviously going to screw things up, that the Purge is a good thing. Once again, we’re telling rather than showing. Save for the armour plating over the doors and windows, the Purge begins to look like any other Tuesday night until…a black guy shows up. You’ve got to be kidding me. This is where it’s going? I hope there’s some really good subtext to back this up.

Rather than ignoring his pleas for sanctuary, Johnny McWasperton lets the black guy into the suburban fortress. An angry mob of white folk then show up and demand the McWaspertons surrender their house guest. Conflict: established.

Cut to: creepy people in masks and Lena Headey asking the oh-so-pointless question of “They can’t get into our home?”

Well of course they are going to get in. Mark the time at 1:53 when my hope for a clever story on social engineering died. Out of the ashes of my shattered expectations rises a much more basic haunted house/survival horror story. This is a shame.

The trailer leaves me thinking that The Purge will probably end up a pretentious and self-serious affair, which constantly has Hawke and Headey wringing their hands over giving the black guy to the mob. One of them will be in favour of it, the other won’t trust the mob not to kill everybody – despite talking about the “target of the purge” –  and the kids will spend their screen time echoing the audience’s preconceived outrage at the inherent barbarism of the Purge. Remember, kids are innocent things incapable of visiting horrors upon anybody. Except then the daughter will do something horrible, like try to shoot the black guy, because that’s just how these things go in crappy horror movies.

I know Headey and Hawke will give their roles the old college try, but I doubt they will be able to do much to salvage this story. Since the trailer builds to a crescendo of slashing, stabbing, shooting, running, and shakey-cam I don’t think it is inappropriate to assume the focus will ultimately land on these and other tropes of a thirty-year-old cinematic/narrative gimmick.

There is certainly manoeuvring room for The Purge to be a smart, capital-H, Horror movie. Yet pulling off such a switch would necessitate the screenplay echoing the sentiments of my friend Matt Moore, who just happens to be a noted SF and Horror writer. On Horror, Matt has often said that it is an inherently moral genre. Some parts of this trailer make me think The Purge could very well be a story driven on morality. Delivering on those flashes would require abandoning the standard slasher go-to move of alternating tension with yelling “boogie boogie boogie” at the audience in lieu of a more cerebral conflict.

The Purge opens in theatres on June 7th. Expect a review, or maybe a podcast, from me shorty thereafter.