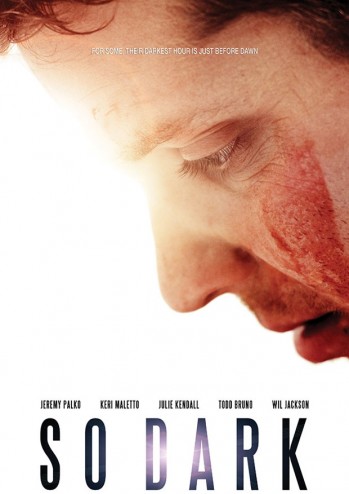 My regular readers know that I’m not usually the biggest fan of vampire stories. This is for the simple reason that I don’t see a lot of genuine creativity emerging out of the post-modern vampire tale. Nine times out of ten the vampire in question is pining for their lost humanity, rather than embracing what they are. And gods help you if you try to sell me on a star crossed romance between a human and a vampire. However, I’ve lately read a handful of very good vampire short stories in addition to witnessing Stakeland go a long way in redeeming the vampire sub-genre. Bearing that in mind, I approached So Dark, a vampire vigilante short film, and the sequel to the “anti-Twilight” film So Pretty, with a cautious optimism.

As I peeled back the layers on So Dark I was immediately struck by its ability to craft a fully formed story within a twenty minute runtime. Therein we see Sean (Jermey Palko), a two-hundred year old vampire, in police custody after murdering a mortal. In the aftermath of his arrest, Sean is interrogated by the ruthless FBI Agent Wilburn (Keri Maletto). The sequence between Wilburn and Sean forms the basis for the film’s core conflict while also shading the back story of this particular bit of vampire mythos. Because of this clever writing the film stands quite well on its own while also serving as a chapter in what is clearly a much larger story.

If we drill down on Sean as a character, it’s clear that So Dark’s writer, James Williams, has done his homework in crafting an original but suitably familiar anti-hero. Though Sean’s actions are informed by personal motivations, his black and white view of the world echoes that of Frank “The Punisher” Castle were he embodied in Forever Knight’s Nicholas Knight. When the film goes on to position Sean’s moral certainty against the ethically dubious and somewhat incompetent Miami PD, it skillfully tempts the audience into making a moral compromise of their own. Do you rationalize what Sean is doing for the greater good? Or do you reject his unilateral actions even in the face of the atrocities the government visits upon vampires in the name of protecting humanity. More importantly, how often do we see this caliber of conflict in a vampire story?

It’s also clear that the actors are engaging with So Dark’s story and setting in a meaningful way. Despite playing a genuinely awful human being, there’s a veneer of ‘ends justifying the means’ righteousness conveyed through Keri Maletto’s performance. This strength, combined with an interesting FBI vs Vampire back story, makes me hope that we haven’t quite seen the last of Agent Wilburn, despite the symbolism of the film’s final scene. For his part, Jermey Palko presents Sean without the requisite ennui that burdens so many other vampire characters. We certainly see him as driven, perhaps even obsessed, but the performance isn’t one that’s singularly informed by self-guilt and recrimination.

In terms of technical merit, So Dark is brilliant in its execution. Transitions from medium to tight shots create an uncomfortable but appropriate intimacy between Sean and Agent Wilburn. When the camera moves, following actors through scenes with all the skill of The West Wing’s walking camera, it does so without invoking the low-budget pox that is shaky cam. The use of physical sets and a minimum amount of visual effects work to reinforce a sense of place where fantasy is layered over top of mundane reality. The only minor flaws that I noticed happen toward the end of the film when the background music seems just a hair too loud in comparison to the dialogue. Fortunately, this imbalance is short lived and quickly resolves as the story moves to the next scene.

Regardless of if So Dark continues as a short film series on Stage Five TV’s youtube channel, The Continuum, or if it gets adapted into something larger – because it’s obvious that So Dark works as a proof of concept piece for a feature length film – I know I would continue to watch it. Director and Co-Producer Al Lougher, as well as the entire cast and crew, prove that they can pull off urban fantasy with all the grit and grime of contemporary drama.

Want to check it out? Here’s the entire movie embedded for your viewing pleasure