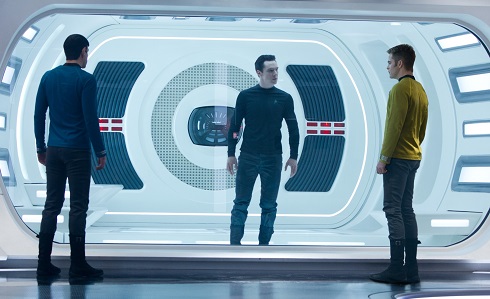 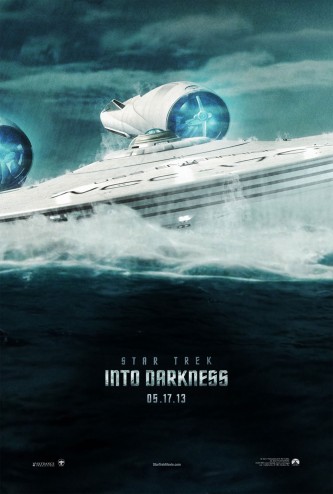 Fair warning: this review will spoil the hell out of the movie’s “big” secret, though it’s not really that much of a secret. In fact, it’s exactly what you think it is. You have been warned.

Where to start on Star Trek Into Darkness…I didn’t hate it. Of course, a lack of hate on my part should not suggest any sort of tacit approval, either. STID is a pastiche of various Trek stories all thrown into a blender, set to frappe. Despite inconsistent writing, god-awful pacing, and dialogue which made me laugh when I was supposed to be sad, STID manages to stick the landing as a low-consequence piece of fluff befitting a (possibly drunk) Sunday afternoon matinee. Now if you’re the sort of person who goes into a Star Trek movie expecting a TOS-style Cold War parable or a morality play a la TNG, then you’re shit out of luck.

There’s no single problem which prevents STID from being a strong entry into the Trek franchise. All of the elements of a good Star Trek story are in play, but they never seem to coalesce into something meaningful. This problem begins with the writing alliance of Orci, Kurtzman, and Lindelof choosing terrorism as the thing to catalyze the story, specifically a bomb in underground London.

It’s not speculative writing to take a historical fact and project it into the future. Whatever cultural resonance John Harrison’s attack is meant to have fell flat with this critic. Perhaps North Americans have lived under the “shadow” of “real” terrorism for long enough that it’s lost its impact when projected on screen. Or maybe I was just underwhelmed by the brainlessness of starting the conflict with a dressed up bit of Enterprise meets Deep Space 9 fan service.

Fan service, there’s a lot of that in this movie. I don’t understand the point of fan service. Making an offhand reference to Harry Mudd, Section 31, Orion females, or Praxis’ explosion, is hardly inspired writing. This sort of story telling puts me in the mind of a dart board, ringed by Star Trek personalities and tropes. Therein, after writing five pages of script, the writers chuck a dart over their shoulder and whatever it lands closest to is the thing rammed into the story as a one-off nod to start the fans drooling. Incidentally, I suspect such a system is how Ron Moore decided who would be a Cylon on Battlestar Galactica.

Also on the subject of drooling fans, let’s talk about Benedict Timothy Carlton Cumberbatch. Yeah yeah, settle down, ladies and gay men. Do you know what works for me? The most English Englishman, ever, playing an English guy named John Harrison. Do you know what I object to? The self-same Englishman trying to pass himself off as a guy named Khan. I don’t know what made me laugh harder, Zachary Quntio trying to channel William Shatner with an obligatory “KHAAAAAAAAAN” shout in the third act, or Cumberbatch taking a break from scenery chewing to announce his true name as Khan. Hey, remember when the 60s were progressive in casting a Mexican gentleman named Ricardo Montalban as a character of East Indian descent? Those were the days.

Whitewashing aside, Harrison-Khan’s part of the story still manages to get a pass. Not a great pass, mind you, but at least a C-. This is mostly due to the fact that I don’t see STID as a remake of The Wrath of Khan. By default, this movie has to be a reboot of TOS’s Space Seed. STID may steal elements of the Wrath of Khan, such as Carol Marcus – for seemingly no reason at all other than to put her in some sexy underwear – and magic torpedoes. But consider that the Wrath of Khan is very much a protracted duel between the ostensibly superior Khan and an underdog Kirk on the cusp of retirement. Alternatively, Space Seed introduces Khan only to see Kirk blundering his way through the first contact and eventually settling Khan on Ceti Alpha V. Though alternate-Khan has a grudge with Star Fleet, there’s little in the way of wrath directed at Kirk or the Enterprise. Any other starship with any other captain would have had the exact same interchange with Khan as Kirk did. Therefore STID = Space Seed, not Wrath of Khan. QED.

What really hobbles the movie is its inability to find one theme and stick with it. The first act begins with Kirk stripped of his command after violating the prime directive and lying about the incident. “Finally,” I thought to myself. The alternate timeline is going to address Kirk’s endless capacity for flouting regulations. However, the education of Kirk quickly falls to the background. The second act, as if recognizing the first was neither brave enough to be a meaningful exploration of terror nor smart enough to sell Kirk as character with sufficient depth to justify an entire movie, changes course toward the Trek trope of an Admiral gone bad. All the while there are flashes of the original “Kirk has no business in command” thread, but it never lasts very long and it’s always delivered as obvious exposition. Meanwhile, some of the Enterprise’s bridge crew complain about the ethics of a military mission to hunt down and kill John Harrison/Khan, which for some reason includes picking a fight with the Klingons. These objections only ever manage to manifest as lip service to Federation doctrine rather than an attempt to tell a morally driven tale.

Time out for nerd rage: the Klingon homeworld is Qo’noS. Kronos is the titan who sired Zeus; get it right or go back to television, JJ.

By the time we get to the third act, any attempt at telling a story with substance has wholly fallen apart. The movie is little more than lens flare, fist fights on 23rd century garbage trucks, and starships in Lunar orbit falling toward the Earth instead of Luna. Crap, there I go thinking again. Best not think too much about this movie or you might find yourself wondering how a man put into cryogenic suspension in the 20th century manages to be a successful starship engineer in the 23rd. I mean for fuck’s sake, selling somebody on that idea is about as intuitive as framing a temporally transported Isaac Newton as a Manhattan Project engineer.

The only, and I mean only, thing which saves STID is the cast. There’s no better person to play a shifty Star Fleet Admiral than Peter Weller. He’s almost as glorious a green screen nosher as Cumberbatch. Simon Pegg’s role as Scotty manages to get fleshed out a bit more, despite his seemingly chronic absence from the Enterprise. Quinto and Urban play Spock and McCoy to the hilt, but much like Pegg, they’re acting talents are wasted on one-offs and bon mots.

And that’s really all there is to Star Trek Into Darkness. It’s a shallow, brainless, slightly misogynistic, romp into a universe filled with wasted potential. It’s pretty telling when my theories about the movie prove to be more interesting than the plot which actually unfolds. For the record, I thought Cumberbatch was a mirror universe version of Picard at the helm of some Terran Empire ship of badassdom. At least that might justify the “into darkness” part of the title.

Star Trek fans, anemic for a new series, will find the film a suitable short-term palliative. Newcomers to the franchise will probably walk away wondering if all Trek is so shallow. And where the original reboot might have been the thing to reinvigorate the franchise on the small screen, STID comes up well short of such a benchmark.