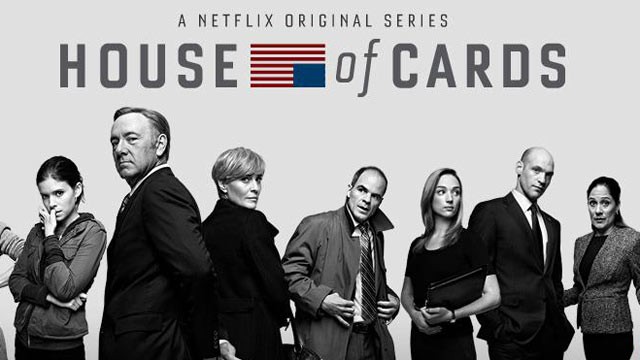 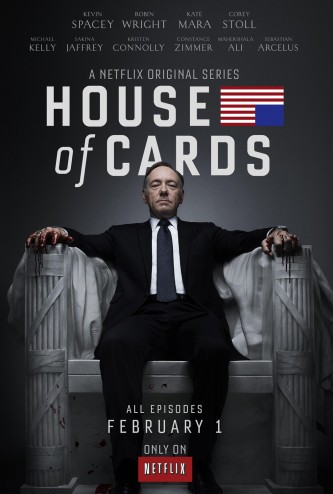 That’s right, I’m reviewing House of Cards. Even I like to take the odd break from genre in favour of something a little more mainstream. Though I wonder if mainstream is the right word when this high stakes political drama has been adapted from a BBC series and novel of the same name and is distributed exclusively on Netflix. Perhaps this is an ontological debate best saved for another day.

I suppose the easiest place to start with House of Cards is that it made me break my own rules for television reviews. Unless I’m reviewing a program on a week-to-week basis, I like to write a television review after watching three hours of the series in question. By my count, three hours is more than enough time to figure out everything required, save for the finer points of plot, for putting together a thoughtful ‘yea’ or ‘nay’. In this instance, I wanted to see everything there was before committing myself to a review if only because House of Cards demonstrates a majestic ability to turn on a dime.

A review-in-progress also seemed askance given that there’s little about House of Cards that makes it seem like television as we’ve come to understand the medium. In terms of storytelling and cinematic artistry, each episode of the series feels like its own feature film. Once again, I don’t want to open this review up to a huge tangent on what Netflix, HBO, and the like are doing for the way we use pictures and sound to convey a story, but from Kevin Spacey’s first soliloquy it’s clear that House of Cards is playing on a level often reserved for capital “F” Film.

For example, one of the series go-to camera tricks is to use static objects and ancillary characters to physically frame a more important character thus symbolizing their prominence within the episode and the broad story arc. Kevin Spacey as Congressman Frank Underwood, a loyal majority whip within a Democrat controlled House of Representatives, is almost always framed in a shot. Corey Stoll as Representative Peter Russo, a freshman congressman from Pennsylvania, is often found as part of a frame for other characters within a scene. When Russo, who never quite comes to understand that he is a pawn in Underwood’s game of political chess, thinks he has made it across the board, so to speak, the cinematography changes such that we see other people framing him. How often do we see television using camera work to build subtext and offer foreshadowing?

Despite the subject matter and technical prowess of the production, House of Cards is anything but pretentious in its delivery. Underwood’s soliloquies and asides create an instant rapport between character and audience. In so much as Frank’s story is one of power politics at its zenith, it is underwritten by more accessible narratives on substance abuse, the glass ceiling, labour rights, and urban poverty. For every scene depicting power and privilege, the writers are adroit enough to offer another that shows the cost of that prestige. The title, which is an apt and enduring commentary on the stability of the power bases that various characters build, is also a continual reminder that those on top only get there on the backs of others.

Though the first season is quite satisfying when viewed as one complete narrative, there are some moments when obvious flaws emerge. On that note I would submit that the first episode, while a powerhouse of a premiere, is something of a red herring in terms of setting a tone for the series. When the President passes Frank over for promotion to Secretary of State, thus precipitating the season’s long term conflict, the audience is led to believe that Frank is going to set himself on knocking down the President’s house of cards. Perhaps this is another reason why I didn’t write about the series after the first three episodes; I thought I was witnessing the initial movements of a long con against the establishment. What follows the first episode is not the active sabotage and subversion of the BBC series, but a more subtle shift toward motivated self-interest on Frank’s part. By the time I fully appreciated that the underlying message of the first episode is simply that Frank Underwood is no longer content to be the good soldier, I was too enraptured with the shifting narrative to really care. In retrospect, I can see it as a slight overplay of the part of the writers to hook the audience, but I remain more than willing to forgive it after the fact.

What I’m less certain about is Robin Wright’s role in the series. As Claire Underwood, NGO director/philanthropist and wife to Frank Underwood, I was expecting Wright to emerge as the power behind the throne: Livia to Frank’s Augustus. As the series moved forward her importance became more opaque, her plot points less relevant, up to and including her flight from Washington to New York for a fling with an ex-lover, and Wright’s acting more stiff and taciturn. In the end, Claire is little more than a liability to Frank’s political ambitions; her NGO, for all the good work it does, appears as little more than a hobby shop compared to Frank’s much more lofty aspirations for the presidency. Set against the likes of Kate Mara, who plays the ruthless upstart journalist Zoe Barnes, Wright’s character and performance are two-dimensional and somewhat unremarkable.

By the time the credits roll on the season’s final episode these shortcomings do little to distract from what is an outstanding piece of long-from political story telling. The pace of the meta-story may ebb and flow from episode to episode, but each entry’s individual offerings always work to build deep character motivations while layering another level on the ongoing house of cards that is House of Cards. For those still uncertain of if there’s anything on Netflix worth watching, I humbly suggest that this may be the series which settles the question once and for all.