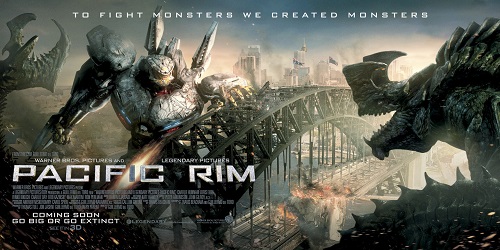 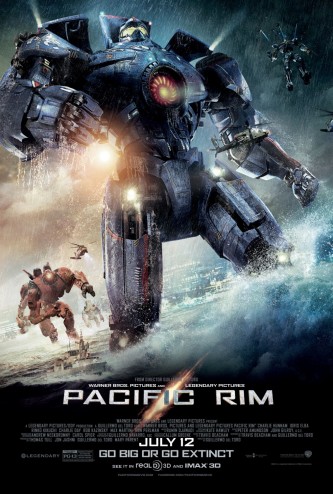 Giant robots. An army of Kaiju. GLaDOS. 3D that doesn’t feel like a cheap tack-on to justify jacking up the price of admission. Well I think that about covers things. Review over. Thanks for coming out, everyone.

Seriously though, I expect that the coming year will see a lot of Mass Effect cosplayers rapidly modding their N7 combat armour into Jaeger neural interface suits. Mark my words; if there is a cosplay stock market, buy Pacific Rim.

The proposition of taking the tropes of Japanese monster movies and making them work for a Hollywood audience is simultaneously a simple and impossible task. Kaiju movies need to be focused on action, presenting a spectacle that appeals to the inner child who still thinks professional wrestling is as unscripted as a brawl in ancient Rome’s Coliseum. Yet that action has to be underwritten by science, specifically environmental science, to the extent that the Kaiju is a manifestation of humanity’s arrogance and hubris. It needs to be awesome enough to fire up the audience, but smart enough to have a moral message. And that is exactly what Guillermo del Toro has given us in Pacific Rim. It strikes the perfect balance between the works of J.J. Abrams, Roland Emmerich, and Ishiro Honda, all through del Toro’s own wholly unique visual style.

I won’t focus too much on plot summary because, really, monsters versus robots. Do I need to draw you a picture? The Kaiju invade through a space-time rift in the bottom of the Pacific Ocean. Unable to effectively fight the Kaiju with conventional weapons, the nations of the world commission the Pan Pacific Defence Corps and their army of Jaegers, combat robots driven by two human pilots. Fast forward to the first act and the scope and frequency of Kaiju attacks has risen to a point that the PPDC is deemed ineffective by the nations of the world. After a scene that injects a little X-Com/XCOM appropriation into the milieu, the PPDC’s operations are shuttered in lieu of building a big wall around the Pacific. When the wall fails, the marginalized PPDC and their four remaining Jaegers become the last hope for the world.

There’s an obvious intelligence to Pacific Rim’s casting. The international PPDC team looks and sounds appropriate for a movie set in and about the Pacific Ocean. Idris Elba heads the PPDC as the taciturn Field Marshall Pentecost, who is a clear nod to the characters of Gendo Ikari, Captain Juzo Okita, and every other strong silent leader from anime history. Charley Hunnam and Rinko Kikuchi co-pilot Gypsy Danger, the Jaeger seen in all of the movie’s promotional material. Other Jaeger teams, red shirts though they be, represent China, Russia, and Australia. Torchwood alum Burn Gorman and Charlie Day of It’s Always Sunny in Philadelphia fame round out the cast as the PPDC’s Odd Couple science division.

Given Hollywood’s recent and flagrant tendency toward whitewashing, I can only imagine how awful this cast could have been. Instead, we hear both Japanese and English spoken aloud throughout the movie. Kikuchi’s character is no tittering bashful schoolgirl cliché, waiting to be taken into sexual maturity by a brash American lead. Like all the other characters, she’s as damaged by the Kaiju War as anybody else. From that pain, Kikuchi’s character finds the strength to be Hunnam’s equal partner in piloting Gypsy Danger.

You hear that, Hollywood? You don’t have to sexualize the shit out of a female Asian actor/character in a lead role for the audience to take her seriously. You can even leave the romance between the two leads unspoken and mostly in the background, and we will still feel the connection with as much impact, possibly more, than if you cram in a PG-13 sex scene.

It goes without saying that a Guillermo del Toro picture is going to have a certain artistry to it. Even though Pan’s Labyrinth was weak in terms of storytelling, it had the benefit of looking unlike like anything at the time. Similarly, Pacific Rim is so heavily invested in presenting a vision of digital art fused with physical sets that it also looks like nothing else I’ve seen of late. Eat your fucking heart out, George Lucas and Michael Bay.

The only thing that even comes marginally close to matching Pacific Rim’s visuals is Battleship. Though a Jaeger using a tanker as a club against a Kaiju sort of closes the book on any meaningful comparisons there.

Most impressive is the fact that Pacific Rim marks the first occasion I haven’t walked out of a 3D movie grumbling about how I would rather watch movies in 2D. Even with 3D technology most other movies do little to move outside the paradigm of fake depth on a flat screen. They use all the old camera tricks of perspective, line, and character blocking to craft an illusion. Employing swift pans and camera motion through scenes, Pacific Rim’s 3D creates an experience where the audience is not observing from across the room, but situated in the center of the action. It’s not the holodeck, mind you, but it’s enough to see how the movie’s cinematography has evolved past the standard playbook to incorporate an additional dimension into the principal photography. Kudos to Guillermo del Toro and his director of photography, Guillermo Navarro.

My only issue with the movie is that of runtime. While the second and third act were both well paced and effective, I could make a case for the first being a bit bloated. Personally, I don’t care. From a critical point of view, I don’t think many people would complain if ten more minutes of Pacific Rim were left on the cutting room floor.

Perhaps the most important thing I have to say about Pacific Rim is that when the script said something to evoke a headscratch, the atmosphere and narrative proved compelling enough to make me not care about the answer. Unlike a certain other film from this summer, Pacific Rim kept me immersed in its story from start to finish. Even in a post-mortem analysis, I haven’t found any flaws in the story that are serious enough to break the movie. Perhaps this is because Pacific Rim isn’t trying to be Transformers; wherein the movie wants to be all things to all people. It’s content to be an over the top piece of robot vs monster battle porn, which skilfully appropriates from 50 years of Japanese and American pop culture to emerge as something unique.

So let’s go back to my first point on this review as a way of summing up. Kaiju. Jaegers. Sophisticated uses of 3D. Cohesive plot. Need I say more? I do? Okay. Ron Pearlman.