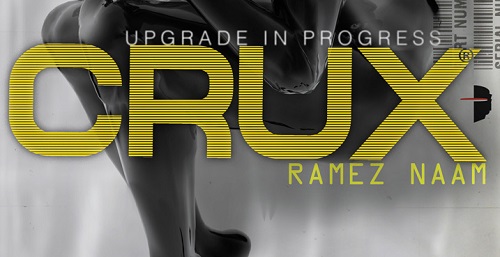 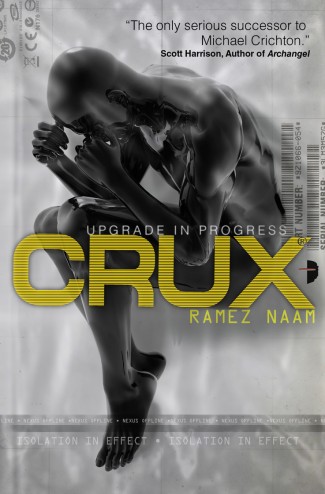 When I sat down to write my review of Nexus, I remember feeling overwhelmed at the prospect of having to package a complex novel within the confines of a short review. Crux has had much the same effect upon me. In the simplest possible terms, this book is speculative fiction at its finest. Full stop. Crux offers the sort of writing which literary wags could easily point to and declare, “Proper literature looks like this.”

Meanwhile genre readers will smile, knowing full well that their medium has always produced works of this caliber.

For anybody approaching Crux without having read the first novel, the book’s prologue provides a primer on Mr. Naam’s vision of our not-too-distant future. It is a world where a Ph.D. student named Kaden Lane creates Nexus 5, a designer “drug” – more on the danger quotes in a moment – which allows users to hack and subsequently network the human brain. Though Nexus continues in this novel as an allegorical critique on America’s war on drugs, it catalyzes Crux’s much deeper study into a post-human future. NB: post-human does not equal post-apocalyptic or any other sort of end-of-the-world cliché. Tempting as it may be to look at the novel’s union of cyberpunk motifs and climate change as a means of facilitating a dystopian label, the novel is very carefully balanced against such a framing.

I draw attention to this because it’s worth recognizing when a near-future science fiction novel doesn’t unfurl a big banner proudly declaring “We’re all screwed, and everyone is going to die.” Sure, it’s fun to watch writers like Paolo Bacigalupi and Margaret Atwood destroy the world. But it’s hard not to walk away from their novels without a palpable fear for the future outweighing any sense of wonder. By comparison, Crux rallying cry is that post-human problems require post-human solutions. The optimism for the future may be measured, pragmatic, and contingent upon change, but it is there none the less. And given a near-prescient plot point that saw a hurricane affecting political change, I think it is important to recognize the ability – and dare I say need? – for smart fiction to inspire readers to do better with our world.

Crux also sees the return of the Department of Homeland Security’s Emerging Risks Division. The ERD, and those who share its worldview, publically demonize Nexus as little more than a narcotic. In that light, the novel pulls no punches in showing how the ability to network a mind lends itself to the worst sort of abuses and affronts to human dignity. Alternatively, Nexus proves capable of awakening a capacity for learning and socialization in children with autism spectrum disorders while also facilitating next generation research between scientists. A think tank takes on a whole new meaning when a dozen scientists can collectively work on a problem at the speed of thought.

For the latter, and certainly individuals within the book’s target demographic, the ERD’s actions seem retrograde. What progressive nation bans a tool and further exploits a constitutional loophole to strip the users of said tool of their citizenship rights? But just as it was in Nexus, the debate in Crux is so much deeper than a simple binary between conservative and progressive ideologies. The proponents of The Chandler Act – imagine the Patriot Act, on anabolic steroids, targeting post-humans – can easily be read as a good piece of legislation designed to protect the rights of a majority who refuse to, or are incapable of, redefining humanity beyond natural selection. Think on that for a moment; the ERD waterboards and tortures Kade’s friends and Nexus co-developers on behalf of Americans who don’t want to be anything more than human. I’d be tempted to smirk at the idea of the government so effectively entrenching mediocrity through a clumsy law, but the strength of Mr. Naam’s ideas precludes such a simple reading. After all, what would happen if the next generation saw an open source technology that makes a person better than any natural born human?

Suppose I go into a job interview with a Nexus-esque neural computer feeding my brain every feel-good neurotransmitter in the book while reminding me of certain speaking points appropriate to each answer. It might not guarantee success, but certainly it grants an advantage otherwise absent to me. In this scenario a defacto ban on post-human technology would be necessary to protect the rights of a majority incapable of being anything more than they are. And once again, Ramez Naam has found a way to take my natural “damn the man” outlook on life and make me sympathize with the establishment.

Similarly, I’m not sure how much I should read into the Chandler Act’s ability to strip post-humans of citizenship as a parallel to North American immigration laws that redefine certain humans as “illegal.” A case could be made, but I’ll leave that to a critic better informed on the topic.

Moving beyond politics, which is hard to do in such a politically astute novel, Crux expands on Nexus’ exploration of post-human technology and religion. One such study focuses on Kade’s flight from justice through Southeast Asia via a series of Buddhist temples. The other looks at a character from the first book who has become the first true post-human after having her consciousness uploaded into a network of quantum computers. It’s standard enough fare to see science fiction writers using non-terrestrial actors as a lens for religious studies. Seeing similar discussions emerge out of scientific innovation is a delightful subversion of a standard trope. Would Buddhism adjust itself in the wake of technology that can allow novices to achieve an oneness with their fellows? Dare we invoke Descartes mind-body discourse in viewing a person of pure consciousness and computer code within her own digital realm? These questions further demonstrate the awe-inspiring extent to which Mr. Naam has considered the implications of post-human tech. My only regret therein is that there isn’t more room in the novel for probe for answers therein.

I’ll preclude any further rambling by closing on this point; if I don’t see some Nebula and/or Hugo buzz orbiting Crux within the next year I will be genuinely surprised. The novel is a poignant reflection on the sociological, economic, climate challenges of our changing world. Meanwhile, Mr. Naam masterfully mobilizes the zeitgeist of contemporary political and tech culture in his creation of a near-future which tempts readers with equal parts dread and optimism. This is not a book to be missed, and certainly one deserving much discussion in the months to come.