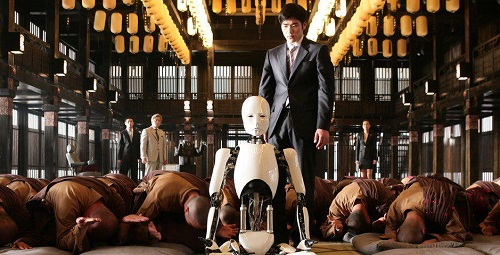 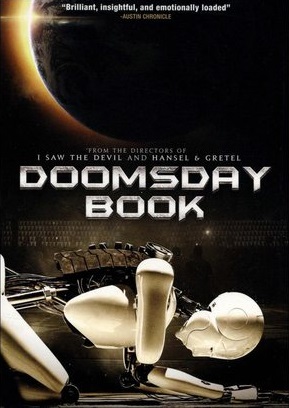 Prior to getting into the movie, I wasn’t sure what to make of Doomsday Book. Now, a week after viewing it, I’m still not certain what I should take away. As a Korean language film, I know there’s a geographical and cultural subtext that is likely lost in both the subtitles and my own lack of expertise on that part of the world. On that note, I’ll ask my readers’ indulgence if I’ve missed some obvious reading contingent upon having lived in Korea.

Taken together, I’m not quite sure how the three constituent short films of this anthology fit together. I don’t see a clear meta-narrative that brings together these three very divergent approaches to the end of world. Two stories represent physical apocalypses, while the third is a more metaphysical affair. If I squint and look sideways at the movie, I suppose there’s a way to view each story as a study into the destruction of an aspect of the human condition: body, soul, and mind, respectively. But that’s stretching interpretation to the point of snapping. Despite this, the triad of end-of-days movies are quite capable, even if they don’t exactly break the mould in terms of genre story telling.

The first film, A Brave New World, is a study into the Korean zombie apocalypse. The focus is a on a gangly 20-something excluded from a family vacation. Naturally, his mother leaves him with a list of chores, which includes taking out the recycling and garbage. You’d think this would be no great inconvenience, except for the fact that the protagonist’s family are singularly the most slovenly middle-class people I have ever seen depicted on film.

There is so much rotten food and garbage strewn about his apartment that I’m surprised the family hasn’t contracted dysentery and died. This cringe worthy post-consumer horror serves to catalyze the remainder of the story. Viewers are taken through waste treatment plants wherein a mouldy apple is processed into cattle feed, which then ends up partially embedded in the steak our protagonist eats on a date with his would-be girlfriend. Thus begins a mad-cow variant of the zombie apocalypse.

Consequently, A Brave New World’s focus on how both zombies and humans are creatures driven by primal desires to feed is about as subtle as the tight shots on maggoty food and people making out. It’s nothing groundbreaking, but as a criticism on consumer culture it does get the job done.

Beyond that, the “oh my god, shit just got real” montage which takes the audience from patient zero to widespread epidemic, could be seen as a means of exploring information as a further infectious vector during a time of crisis. And had I not seen Contagion, I’m sure that idea would be blowing my mind. Now it’s just sort of par for the course. So while there’s little that is particularly innovative about this interpretation of the zombie apocalypse, it’s certainly competent and reasonably chill inducing in its photography.

The anthology’s second entry, The Heavenly Creature, is another story that is competent, but not ground breaking. Where other robots-among-us narratives explore the consequences of machines achieving sentience, this movie is concerned with an android finding spiritual enlightenment.

It’s hard to miss the Asimov inspired motifs driving a story about a service android turned Buddhist monk. The big, and possibly evil, robot manufacturer, views the RU-4 android as an affront to human supremacy on Earth. The monks, naming the machine An-myung, recognize his capacity for personhood and his potential embodiment of Buddhism’s teachings. What follows is some metaphysical talk on perception, objective reality, and the ability to self-identify as the core of consciousness. Not knowing much more about Buddism than what I’ve learned from movies and the odd book or two over the years, I’m sure there’s an entire layer to the story that I’m missing.

What is clear, however, is the movie’s outstanding ability to employ a non-human character that is capable of resonating on an emotional level. Setting aside a personal tendency to anthropomorphize machines, the puppetry and voice acting behind An-myung is genuinely stirring. Even though it’s a clunky near-future looking doll, there’s a compelling amount of soul to the character. The value for pathos, more so than the cookie cutter metaphysical conflict between man and machine, is what makes this story stand out within the collection.

Finally we come to Happy Birthday, Doomsday Book’s nod to the absurd. The story begins with a little girl throwing her father’s favourite pool ball out a window. Why pool balls? I have no idea. Maybe it’s big in Korea? When she tries to order a replacement she inadvertently logs on to an extraterrestrial version of ebay. Frantic hand waving and weak exposition attempt to explain this event, but the effort is quite sad considering the eloquent way A Brave New World charts the origins of the zombie apocalypse without saying a word. Nonetheless, the alien ebay results in an 8-ball the size of Texas hurdling toward the Earth. Following that, there’s some panic, hysteria, and one newscaster pimp slapping another on the air. Unfortunately the writing and acting lack any clear indication of if this is supposed to be Stooge-ish comedy or a cutting criticism on how crisis brings out the worst in people.

Would that there was any sort of pay off for asking the audience to suspend their disbelief to the point that they can accept an alien internet merging with our own through some convoluted take on chaos theory, this movie would be instantly better. Instead, it just feels like the product of writers who have blown all their good ideas on the anthology’s first two projects.

As anthologies go, I suppose two out of three stories getting the job does isn’t a bad track record. So while there’s nothing revolutionary to Doomsday Book, at least not for this Westerner with little-to-no knowledge of Korean culture, it’s hardly a waste of time. The first two episodes are good attempts at the go-to stories of science fiction. Even if these conflicts are somewhat Western in origin, there’s a clear uniqueness to their telling through a Korean lens. While the third movie wants for anything beyond absurdity and a cloying attempt to create sympathy for a little girl deprived of her childhood, it can be justified as a strange palate cleanser following a heavily metaphysical second act.

Written and Directed by Pil-Sung Yim and Kim Jee-Woon