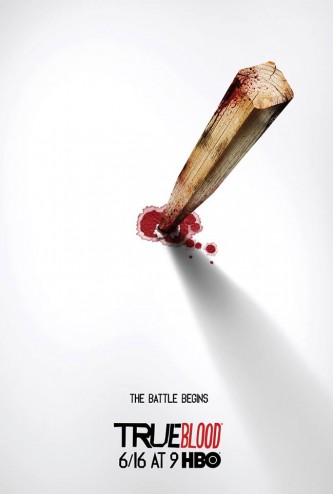 Every summer I find myself sitting down to write a post like this. And true to form, every year I always ask myself why I keep watching True Blood. I have no good answer.

I suppose the academic in me wants to understand how something so dumb can be so popular. The iota of intelligence that underwrote the series’ ongoing vampires versus humans meta-conflict dropped off the grid sometime around the end of season two. Since then it has been nothing but downhill. Granted, we do get treated to the occasional scene stealing one-liner, usually courtesy of Kristin Bauer van Straten’s acerbic vampire Pam. But in between those great moments, wherein at least one writer recognizes the absolute crap that the rest of his/her colleagues are flinging against the wall, the audience has been subjected to were-puma gang rapes, Iraqi fire-starting ghosts, and vampires tripping balls on the blood of their messiah.

After season five dressed up pointless faffing about as a vampire religious schism, it was good to see season six trying to recapture some of the early series’ “us versus them” energy. There is an appropriate, if mildly stupid, conspiracy which sees the enactment of martial law, abuses against constitutional rights, and the creation of a vampire internment camp in Louisiana. All of this is very good. But then the series had to bring in fairies, building from there to a Christianity driven vampire Final Solution.

Come on, writers. You have to assume that there are a few people who aren’t watching the show for eye candy. Do you really think you can go from internment to a Final Solution over the course of two weeks of plot time?

If anti-vampire fascism was executed as the singular focus of the season, I think could have got on board the genocide train bandwagon. In such a scenario, there would have been time to properly show the breakdown of due process and the rise of a police state in and around Bon Temps. But why shade the conflict when the series can take a tedious trip to the dark side and back again via Alcide Herveaux. If that’s not enough for you, we can witness the mental breakdown and suicide of a tertiary character, who prior to this season was lucky to have an average of five lines per episode. And if you’re still hungry for more distractions from the main plot, there’s fairy bullshit which, though eventually becoming relevant to the main plot, does little other than fill time for the first five episodes.

I said this last year, and I’ll say it again this year, half of the show’s characters need to die. If the ensemble continues to see an annual net growth – this year we got a new baby vampire, Jason’s vampire girlfriend, Jessica’s vampire boyfriend, Sam’s girlfriend, and Warlow the vampire-fairy – then the shallow veneer of self-seriousness that the show maintains is going to crack under its own weight.

Despite these problems, I have to recognize this season as an improvement on the previous three. There’s a faint awareness, in both the writing and the acting, that the show is running off the rails. In that light, I quite enjoyed watching Ryan Kwanten, Alexander Skarsgård, Rutina Wesley, and even Stephen Moyer chewing up the scenery from week to week. In some ways, this season of True Blood reminds me of the final season of Blakes’ 7; therein Paul Darrow’s performances always seemed to be charged by the knowledge that the series had turned into a hot mess. Rather than let that knowledge limit him, he played Avon as hard as he could. The same can be said for select members of True Blood’s cast.

I imagine most fans and critics would join me in dismissing the season finale’s “six months later” time jump as utterly lazy writing.  This skip ahead is indicative of the poor pacing and excess filler material found within the season. Suppose that everything that happened in season six, prior to the flash forward, were condensed into the first five episodes, the last five could have taken us from internment to attempted genocide without the hand waiving of “Hepatitis V” and Eric flying off into the sunset to set things right. Maybe, just maybe, the audience would have liked to see some natural plot development. Now the writers have put themselves in a place where the first few episodes of season seven are going to get caught up in navel gazing as plot holes are necessarily plugged.

I won’t deny that the wandering vampire army in the finale’s final frame set up an interesting conflict. At the same time, when you roll a metaphorical grenade into a crowded room, only one of two things can happen.

If it goes boom, then we are witness to a wholesale slaughter of Bon Temps at the restaurant formerly known as Merlotte’s. Cool? Absolutely. And while that’s a great hook, we must ask where a show with a limited capacity for deep writing can go from there? Granted, True Blood isn’t beneath a good wholesale slaughter to advance the plot. But from my point of view, it can only play that card once per season. Suppose then that the grenade is a dud, and the vampires don’t massacre the assembled citizens of Bon Temps; ladies and gentlemen you just spent the winter in anticipation of a fake out.

It doesn’t take Carson in a turban to foresee a lead Hep-V vampire flinging invectives and threats at the good people of Bon Temps. The assembled healthy vampires and humans, with Jason and his girlfriend as mouthpieces, will draw a line in the sand, and before you can “drop fang” we’ll be back to the posturing and wanking of season five. Sherriff Andy certainly can’t show up with a tactical team and kill all the itinerant vampires. If that happened we would need a new conflict for the coming season. So when we come right down to it, the “six months later card” has only served to put next season behind the narrative eight ball.

All in all, I wouldn’t call True Blood’s sixth season a traditionally “good” season of television. Measured against the incredibly low standards that True Blood sets for itself, season six does land well above the curve. It’s an improvement over what we’ve been seeing for the last three years, but those were three genuinely awful seasons of television. I suspect, however, this success will be short lived as the portents for season seven do not bode well.

Now if there’s any justice in the universe, I won’t have to write about sexy vampires for another year.