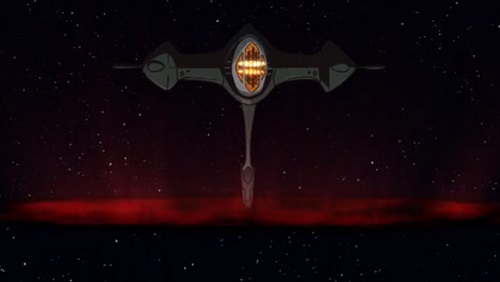 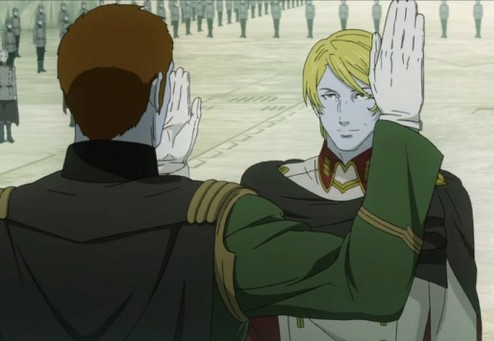 Remember when I said the series is painting Kodai as a good officer en route to command? After watching episode 12, What Lies Beyond, I can’t tell if I’m right or wrong on that point.

The chapter opens with Shima and Kodai bickering during a morning briefing. Still seething from the previous episode’s revelation about the origins of the war, Shima uses Kodai’s seemingly cavalier attitude toward the mission as an excuse to rehash the Melda Ditz debate. Rather than de-escalating the situation, Kodai fully engages in Shima’s pissing contest. Captain Okita brings the spectacle to an unceremonious end, assigning both men to janitorial duty until they learn how to act like officers.

With Kodai and Shima bookending the episode, the more interesting plot threads weave together on planet Gamilas. NB: The subtitles are calling the capital of the Gamilas Empire, Baleras. The all knowing Wikipedia, in both English and Japanese, shows no record of the planet’s name being retconed in SBY 2199. For the sake of consistency within this series of posts, I’m going to keep calling the Gamilan homeworld Gamilas until somebody provides me with a compelling reason to change my ways.

General Domel, who we met in episode 12 amid a battle with ships from the Comet/Gatlantis Empire, arrives on Gamilas to receive a medal from Desler, personally. Though the ceremony itself proves nothing more than a PR stunt to masquerade a deeper plot; Desler brought Domel back from the “front lines of the empire’s defense” to destroy the Yamato. Why he couldn’t send a space-telegram is beyond my reckoning.

On a side note, I don’t recall the original series ever mentioning the Comet Empire in the first season. How interesting that they are being brought in now. I wonder if a second season is already in the works where the Earth-Gamilas war will be framed as the thing which enabled the White Comet’s invasion into the Milky Way.

Speculation aside, the episode gives a bit more shading into the state of affairs within the imperial capital. To start, there’s an obvious, and somewhat tiring, tripling down on the Nazi imagery. We get it, they’re space Nazis. The pomp and circumstance of Domel’s award ceremony would have done Joeseph Gobbels proud. More interesting is Desler’s “hotline” conversation with Iscandar, calling the world “the heart and soul of his nation.” His follow-up plans to unify the two worlds are a clear invocation of the German-Austrian Anschluss.

Thankfully, a point of real substance emerges from all the world building. This manifests as Gamilan citizens being deported to a prison planet in the aftermath of an act of domestic terrorism. Even General Domel voices concerns about the Gamilan Secret Police’s efficacy; are they exiling criminals, or just rounding up citizens ad hoc to send a message to the rest of the planet? Honestly, I’m not quite sure how to read the subtext of this event. It would be a little too on the nose to play the holocaust card at this point. Especially in light of Melda Ditz’s statement that those who surrender to the empire are allowed to serve within it. I don’t see how genocide would fit into that formula. What would prove interesting is an active internal resistance to Desler and the established Gamilan order. In that case, the Yamato could transform the dissidents from a resistance to fifth columnists.

In terms of series’ earlier tendencies toward simple dichotomies, episode 12 does work quite well to undermine the “evil empire” nature of the Gamilans. Where previously there was only politicking within the Gamilan high command, we now see unrest in the empire at large. However, this could go to a very ugly place if the Yamato turns into a full-on liberator. The original series ends with Kodai nuking Gamilas and all its poor innocent bystanders. Said war crime is sine qua non for this story. All of Yamato 2199’s hints at being a meaningful allegory go out the window if Kodai doesn’t commit his war crime and own it as exactly that.

The episode ends on the Yamato with Kodai and Shima making peace with each other. Their fist bumping reconciliation is overshadowed by some profound, if expected, wartime philosophy from the Yamato’s senior crew. Lt. Commander Tokugawa talks some sense into Shima, pointing out that regardless of who fired first, the war between Earth and Gamilas, just like the war between America and Japan, was going to happen. Meanwhile, Captain Okita has a heart-to-heart with Kodai about the need for soldiers to make humane decisions during battle. In part, the scene is Okita rationalizing his refusal to fire blindly on the Gamilans at first contact. It also strikes as necessary lip service for any war story. At some point somebody has to talk about balancing orders and ethics; it wouldn’t be space opera, otherwise. On a deeper level, this scene is Okita giving Kodai tacit approval for the way he handled things with Melda, notwithstanding the janitorial punishment for a lack of decorum on the bridge.

Only a Gamilan space submarine, presumably under General Domel’s command, torpedoing the Yamato precludes a big happy ending. Next time on Space Battleship Yamato 2199, it’s that episode of Star Trek that was based on The Enemy Below.