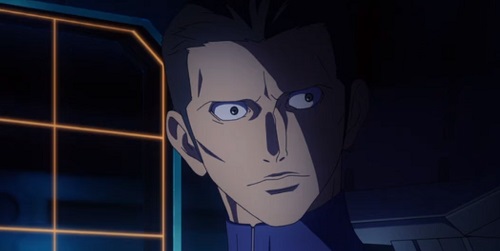 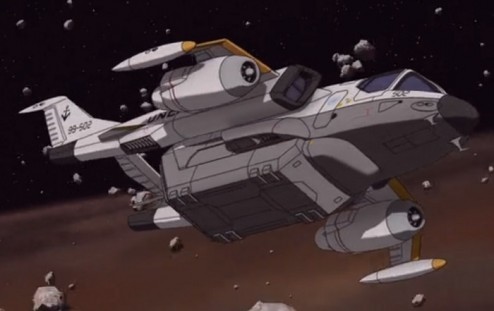 Entertaining as it is to finally see the Yamato firing its guns in anger, I think the thirteenth episode of Space Battleship Yamato 2199 might have overplayed its hand just a bit. It’s not terrible, mind you. But for a series that has gone out of its way to avoid being goofy, this episode is a clear step in the wrong direction.

The Wolf From Another Dimension picks up almost exactly where the previous episode left off. The Yamato is under attack from a seemingly invisible Gamilan ship. Said ship proves to be a space submarine. That’s right, I said space submarine.

I can imagine any number of ways the writers could have brought the submarine concept into a space opera. The most sensible seems to be something along the lines of the SSV Normandy from Mass Effect. Create a ship that produces no heat signature and skin it in a non-reflective material: instant space submarine. Instead, the Gamilan space sub hides out in “the bottom of another dimension.”

Okay. . .so that time when the Yamato was stuck in a dimensional rift wasn’t a one-off? It was conceptual groundwork for the Gamilans using that layer of space as a platform for attack. Fine, whatever.

I’ll concede that even the best space opera merits a certain latitude in terms of its employed tropes. And if I’m going to gives the series a pass on its catalyst – an alien civilization sending a “bootstrap” data package capable of reinventing physics as humanity understands it – I should forgive a dimensional submarine. And I probably would if it wasn’t for the rest of the episode making me think there was a wholesale smarter way to work with this particular chapter of the story.

With the Yamato hiding Millennium Falcon-style from the Gamilan submarine, Captain Okita passes out. This leaves Lt. Commander Sanada in command while Dr. Sato performs emergency surgery on the Captain. During his stint at the conn, the XO proves painfully sentimental and morbidly stupid. To escape the sub, Sanada’s immediate underling, Lt. Niimi, recommends sending out a hyperspace ping to try and track the Gamilan ship. Kodai points out that such an action would give away the Yamato’s position. Putting the tactic in tactical officer, Kodai instead volunteers to pilot a support shuttle which would deploy a series of hyperspace probes. This would allow the Yamato to track the submarine’s torpedoes as they come out of the lower dimension. Against all military and naval logic, Sanada dismisses Kodai’s idea and orders the ping. Rather than challenging the XO, Kodai recalls Captain Okita’s words about disobeying orders for the greater good – those words we heard last episode – and goes off to deploy the beacons on his own.

In turn, Kodai’s faux-insubordinate actions let the Yamato destroy the submarine’s periscope drone. The sub then limps off to fight another day.

The problem here is two-fold.

First, Sanada is an idiot. Even if The Hunt for Red October was the limit of my knowledge of naval warfare – it’s not – I would know you never go to active sonar unless you want the enemy to know where you are. His decision would have made sense if it was part of an extra-smart plan; therein Kodai’s insubordination would have brought the ship into greater jeopardy. But no. The final scene reveals that Sanada used the ping because he was afraid to send Kodai into a dangerous situation. Apparently, there’s some history between Sanada and Kodai’s dead older brother, Mamoru.

The other half of the problem is Kodai basing his decision to drop the hyperspace buoys on Captain Okita’s “a soldier can’t put orders above his conscience” speech. Too soon, writers, too soon and too low stakes. Okita rejected orders on moral grounds when he was directed to fire unprovoked upon a heretofore unknown alien civilization. Kodai didn’t even refuse Sanada’s orders to the point of being relieved of duty. He simply rationalized an impulsive, though correct, decision based on an out of context anecdote from the captain.

At the very least, we now have some brickwork laid on getting Sanada out of the chain of command when Captain Okita falls too ill to command the Yamato. This episode clearly demonstrates that the XO, for all his Spock-like personality, doesn’t have the fortitude to order someone to their (probable) death. I imagine he will either do something self-sacrificing to keep Kodai alive long enough to take the big chair, or he’ll just meekly stand aside and let command pass to Kodai.

And if you haven’t already, make sure to check out the kickstarter for my upcoming audio project.