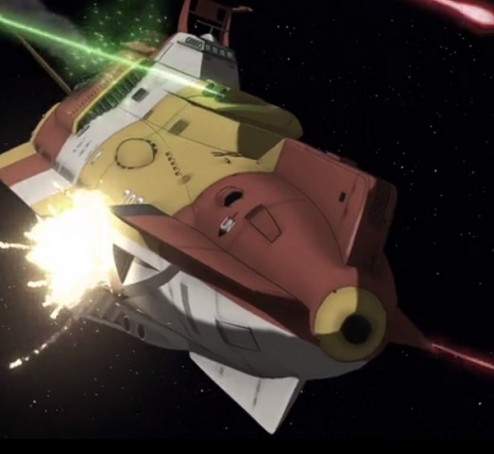 Episode 11, A World I Once Saw, is Yamato 2199 at its best and worst. On the one hand, we witness the series moving far beyond the simplistic archetypes that permeated the original series. More importantly, this episode offers writing that confronts Imperial Japan’s history, rather than revising it for easy digestion. Both of those things are great. Unfortunately, they pair terribly with exaggerated boob shots.

Does Melda Ditz, the captive Gamilan fighter pilot, really need to be stripped down to a strapless clamshell bra to have Dr. Sato figure out that Gamilan and Human DNA is identical? At the same time, I don’t think it’s possible for Sato’s nurse to be drawn with a bigger chest. Were she a real person, I expect her back problems would be so pronounced as to render military service impossible, even in a space navy. . .especially in a space navy. Since the Yamato’s the only Earth ship that has artificial gravity, by virtue of its wave motion engine, I can just imagine the problems that null-gravity would have on G-cup boobs.

Notwithstanding spa time aboard the Yamato, the episode’s big reveal is the fact that Melda was telling the truth about humanity starting the war. The allegation is confirmed after Shima buys whole hog into a propaganda film, vilifying the Gamilans as “cowardly demonic invaders.” Shima then meets with Lt. Yamazaki, the Yamato’s Assistant Chief Engineer and the sole survivor of the first battle between Earth and Gamilas. During said battle, a then Admiral Okita refused to fire arbitrarily on the three Gamilan ships intruding in the Sol system. Earth HQ relieved Okita of duty, ordering the vanguard of the fleet, under the command of Shima’s father, to open fire on the Gamilans. The Gamilan ships, though outnumbered, dispatched the Earth fleet.

The revelation pushes Shima over a mental edge. He accuses Yamazaki of being a liar and staining his father’s honour. Thereafter, Shima does everything he can to undermine the dialogue that Kodai and Captain Okita are building with Melda. Shima, like Ensign Yamamoto, can only see the Gamilan guest as inhuman monster.

This is quite the change from the original series. Therein, Kodai was the hothead and Shima the peacenik. The change, however, goes beyond a mere reversal of attitudes between the Yamato’s navigation and tactical officers. During a briefing, Kodai points out that he lost his parents and brother to the Gamilans. He further admits that he hates them just as much as anybody. At the same time Kodai recognizes Melda as an individual entity and judges her by her actions, not those of her species. As was the case in episode 10, a message of tolerance, or at least cooperation, rings true.

This cooperative layer is further reinforced when Ens. Yamamoto breaks Melda out of the brig, intent to settle a grudge with the Gamilan officer. Melda wins the unsanctioned starfighter duel, forcing Akira to eject from her Cosmo Falcon. She then rescues a drifting Yamamoto instead of fleeing from the Yamato. In doing so, the writing further rejects the “us versus them” binary that was so heavily brought to bear during the first half-dozen episodes. The Gamilans, though still ridiculously Germanic, can’t be so easily reduced to space Nazi caricatures, at least not when the UNCF is guilty of a Pearl Harbour-esque strike against them. Sure, the Gamilans are militaristic empire builders, but such a fact has to be viewed through the lens of humanity’s (IE: Japan’s) xenophobia sparking the war.

Similarly, Kodai’s ability to see the difference between the Gamilans as a species and Melda as a single Gamilan officer further demolishes the reductive relationship between antagonists. Kodai and Captain Okita embody an apparent minority of progressives among the Yamato’s crew, placing honour at the forefront of their relations with the Gamilans. Shima represents the radicals who see Melda and all Gamilans as monsters. In between there are crew members who seem cut from the same block as Battlestar Galactica’s Lt. Thorne. One such security officer almost entertains sexual degradation as a tool for extracting information from Melda.

This diversity adds more legitimacy to Yamato 2199 as a proper war story. It also sets up an apropos extended metaphor for the Cosmo Navy as the Imperial Japanese Navy; therein Okita’s character can be seen to draw inspiration from Isoroku Yamamoto. Though Admiral Yamamoto led the attack on Pearl Harbour, he held a considerable respect for America and strenuously objected to the Rome-Berlin-Tokyo axis. I’ll concede it might be a stretch to then paint the UNCF high command as Tojo and his associated hawks, but the idea should be kept on the table.

Furthermore, this ideological depth among the crew works to plant the seeds of Kodai’s eventual rise to captaincy in a more natural way. In the original story Kodai was a loose cannon who had to learn how to be a good officer. Now, Kodai is already good, if inexperienced, officer on course to command.

Even though the Yamato came no closer to Iscandar during this episode, A World I Once Saw confirms that there is considerable depth to this narrative experience. As refreshing as that is, I don’t think it quite makes up for the overt male wish fulfillment in the bathtub scene with Akira and Yuki. Certainly SBY 2199 it is a far cry from the 70s in terms of gender equity. Back then Yuki was the only female crew member and was regularly subjected to Analyzer grabbing her ass. Commendable as it is to see anime evolve past robosexual advances, it’s still tedious to watch the pointless sexualization of female characters. I know, it’s anime. I should probably get over it as criticizing an anime for its treatment of the female form is about as useful as complaining about the temperature during a heat wave.