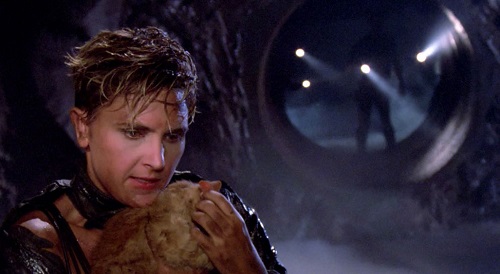 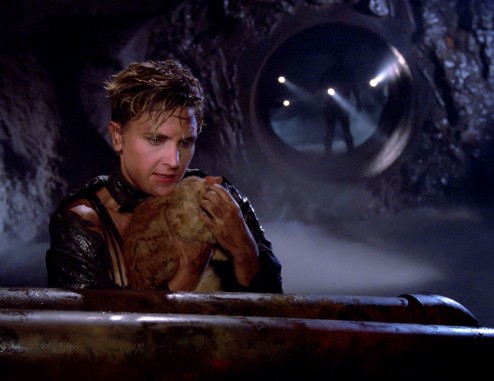 I’m going to come clean on this one; the new job has been kicking my ass. Today I channeled my inner Jack Ryan before giving a presentation to a room of people situated well above my pay grade, and the majority of whom were, I suspect, much smarter than yours truly. On the up side, I didn’t get laughed out of the lecture hall, and the boss was happy with my work. Advantage: Shaftoe.

The bad news is that a few extra hours in the office cut into this week’s “to review” list. I hope you’ll find it within your heart to forgive me for doing the best I can with the material at hand.

To wit: every morning before going to work I watch the first half of an episode of Star Trek: The Next Generation. This morning I logged about twenty-seven minutes of Legacy. Legacy sees a shuttle brimming with red shirts crashing on Turkana IV, home world of the late Lt. Tasha Yar.

For those who don’t recall, Turkana IV is one of TNG’s few and fleeting attempts to add a dark underbelly to the Federation’s socialist utopia. More specifically, Turkana IV is presented as a failed nation. The world was a member of the Federation before seceding for undisclosed reasons. Canon then records the planet’s descent into a lawless hellscape. Apparently, the Federation Council was content to wash its hands of the entire situation. PS: who wants to guess how many terrible fanfics have been written about Turkana IV?

A Season One episode of TNG, captured in the above picture, gives us a flashback to Tasha’s life on Turkana. Therein, the audience is introduced to the concept of a “rape gang,” which is exactly what it sounds like. Cut to a young Lt. Yar hiding in a tunnel, cradling a mangy cat. She sets the cat free just as a hooting bunch of men with flashlights come around the corner. What follows goes without saying or showing. The scene, though almost a throwaway, is creepy as fuck with its implications that Tasha is about to get violated seven ways from Romulus.

Upon arriving at Turkana in Season Four, Picard dispatches the obligatory away team. True to Trek form, the Captain doesn’t send in twenty-five heavily armed security officers. Instead, he beams in Riker, Data, Worf, and Doctor Crusher. Worf, being the only sensible one in the bunch, reminds everybody that Turkana IV is a god forsaken shit hole. He further questions the wisdom of sending the good Doctor in the first wave, what with all the rape gangs. A “Shut up, Worf” moment ensues and off goes the episode on a wild series of loosely connected tangents.

Based upon what I saw, and what I remember, Legacy is far from a stand out episode of Trek. In my estimation, TNG was at its worst when exploring Data’s non-existent feelings. What stuck with me was the episode’s blink-and-miss-it return to the idea of rape gangs.

At first, I thought that the series missed an opportunity to pull the trigger on a much more emotionally resonant story. Legacy presents a version of Turkana IV that is a tea party compared to what Lt. Yar described. Why not show the audience what a failed future state actually looks like? Why not prove Worf correct, for once, and force Picard to send in the (space) marines?

In a post Battlestar Galactica world it’s easy to be cynical about Star Trek: TNG not pulling the trigger on rape gangs, implied as they may be. Nor should we forget that Season Six of TNG saw David Warner gracing the series for a torture porn/1984 episode. Five years after that, DS9’s The Siege of AR-558 would see  Starfleet security officers make necklaces of ketracel-white tubes plucked from dead Jem’Hadar. So I’ll put it to you, dear reader, did TNG push the envelope with its talk of rape gangs and failed nations in Legacy? Or did it run screaming from the edge of dark sci-fi and back into the comforting tropes of android-human empathy, only later poking its nose back into darker territory?