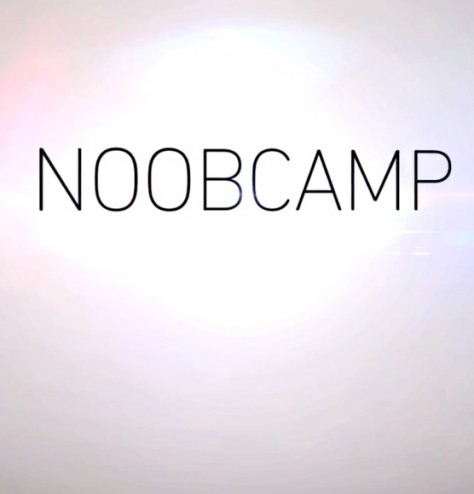 The creators of Noobcamp have taken an interesting tack in presenting their web series’ kickstarter campaign. Therein, they acknowledge the novelty of web television as an emerging concept. At the same time, they pull no punches in suggesting that the web series, as a whole, is trying to find its way as a vehicle for telling an effective story.

…many web shows just follow actors around with cameras while the actors discuss their backstory.

It is in this fashion that the Mayview production team declared their goal of crafting a web series that takes full advantage of established cinematic techniques in conveying a narrative. An outside observer might be tempted to suggest that the production is inviting a special kind of hubris with their generalizations about the state of web media. I certainly don’t think any of the web series I’ve reviewed are burdened by an abundance of world building. Then again, it is a big internet out there. To borrow a phrase from Roy Batty, perhaps they’ve seen things I wouldn’t believe.

This aside, the six minute pitch video, the one minute trailer – which incidentally does a fantastic job of showing rather than telling – and a mission statement citing games and film as life affirming experiences, were enough to pique my interest in this project. Using David Mamet’s quote about illiterates inventing “backstory” may have also helped seal the deal.

So rather than summarizing, I’ll let the series speak for itself.

Noobcamp is a story about an ex-professional gamer who is forced to teach a video game camp for kids. Johnny7, as he was once known, was among the top pro gamers in the world and made millions in endorsements. The show picks up several years after his downfall. Johnny, now mid-20s, reckless and jaded from his fame and fortune, is probably the worst person for the job, but he may be exactly what they need.

Even if Noobcamp doesn’t revolutionize the medium, which would be rather challenging to do without going into art house territory, it does seem like something I would gladly watch. In fact, I may kick in four dollars if only for the executive producer credit.

As of the time of this post, Noobcamp is about 81% of the way to its $25,000 goal with 52 hours remaining on the campaign. Would you like to know more? Click here to head over to their kickstarter page for all the details.