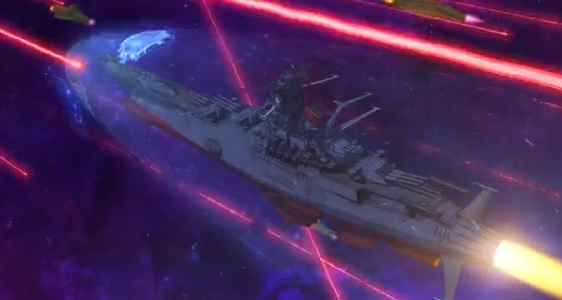 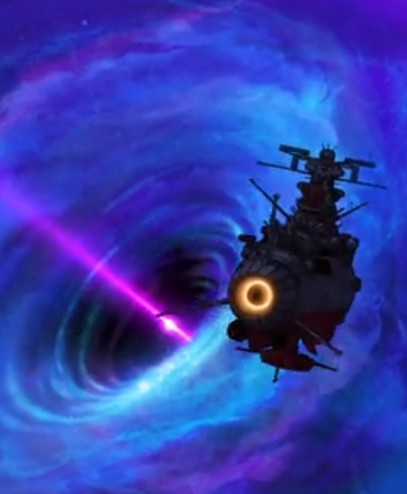 Aptly titled The Point of No Return this episode witnesses the shit hiting the proverbial fan. We open on Gimleh, Director of Gamilas’ secret police, putting down a rebellion on an otherwise non-descript planet. Actually, “putting down” is something of an inaccurate euphemism for Gimleh’s actions. More precisely, he burns the planet to a cinder, killing its native and blue-skinned Gamilan population. While obviously an “evil for the sake of evil” action, it does plant two seeds in terms of where the season’s remaining episodes are going to go. The first is that this particular rebellion, and others occuring off-screen, are the result of the Yamato pushing deeper into Gamilan space. This makes some sense considering the Gamilan Empire is built upon the backs of vanquished civilizations. Said reminder leads us to the second theme, the Gamilans are stupendously powerful and they probably could have swatted the Yamato ages ago had anybody felt the need.

The Gamilans have limitless ships, bases for resupply, and control over a system of warp gates allowing instantaneous travel across vast distances. Meanwhile, the Yamato can’t even keep its food replicators working, forcing the crew on to bread and water rations. Subject to constant force recon attacks from Domel’s battle group, the Yamato’s crew begin to show some signs of fraying at the edges. Their behaviors are a little reminiscent of Battlestar Galactica’s season one premiere 33, though I doubt the relationship is an intentional one. With crew morale plummeting, Acting Captain Sanada sets course for Beemela 4 a seemingly hospitable planet that the Iscandarians just so happened to note in their abridged version of the Hitchhiker’s Guide to the Large Magellenic Cloud. And with his decision, everything starts to go wrong.

Lt. Ito, the Yamato’s security chief, begins positioning his pieces for some pending act of treachery. He begins by demanding information about Yuki from Lt. Niimi. When Niimi asks Ito why he wants to know about the ship’s operations officer, he responds with a not-at-all suspicious “you don’t need to know.” He then tells Niimi to stay away from Sanada, despite the fact that he is her direct superior. Things get even weirder when Niimi starts cozying up to Shima. In an utterly confusing scene, Nimmi tells Shima that he’s the most valuable part of the crew, applying all the subtlety of a porn star who can’t afford to pay the pizza delivery man. Is Niimi in on Ito’s plan? Or is she just looking to blow off some steam with the navigator?

Whatever Ito and Niimi are planning, their machinations get put on pause when the warp to Beemela lands the Yamato in the middle of Domel’s battle group. Go figure that after conducting days of reconnaissance Domel would figure out where the Yamato was going. Chalk up another point for Lt. Commander Sanada’s command skills.

What Domel doesn’t know is that far away from the battle at Beemela 4, Desler, supreme leader of the Gamilas Empire, has been assassinated.

That’s right, the big bad guy, the character that academics and pop culture experts alike have likened unto Adolf Hitler, is dead. It’s not even a great dramatic et tu brutus moment. His ship suffers the SBY equivalent of a warp core breach. One big-badda-boom later and Desler is no more – or so it seems. Despite obvious hints toward Gamilan intrigues I wasn’t expecting the writers to take Desler off the board. He and Kodai need to have a dramatic show down. Desler has to lead Gamilas’ defence against the White Comet Empire in season two. Removing him now, even if this is some ploy on Desler’s part to expose the traitors in his government, completely changes the game for the rest of this season. Not to mention that if Desler can die, so can anybody else. Ladies and gentlemen, we have our Sheppard Book moment.

Nevertheless, Domel presses the attack against the Yamato. Lt. Commander dumb ass Sanada very nearly makes another blunder before Captain Oktia takes the bridge and countermands an order that would have saw the Yamato’s fighters cut down like dogs. Instead, Okita orders Shima to fly straight through the enemy lines, despite the fact that there are hundreds of Gamilan destroyers, some seemingly flying formation with the Yamato. Though sinking a dozen or so Gamilan ships, the Yamato proves no match for the sheer numbers of Domel’s fleet. With the engines failing and two gun turrets destroyed, Okita seems resigned to death. Then, when all seems lost, the Gamilan guns go quiet and their ships begin warping out of the area.

On the bridge of Domel’s flagship, Desler’s subaltern calls in an immediate retreat back to the home world. Ah yes, I remember this trope when Robotech did it back in the 80s. Khyron’s forces were about to destroy the SDF-1 until Breetai used a recall device to forcibly end the conflict. Nice to see anime writers sticking with the classics, however much of a mundane and Deus Ex Machina it may be.

The episode ends with the Yamato limping through space, and all hands aboard surprised to be alive.

I’ll give the writers credit for making me feel just as much in the dark about events within the Gamilan Empire as the Yamato’s crew. Even though I got to see Desler’s ship explode, I’m none the wiser in terms of how this is going to play out for the empire or Earth. I assume the political intrigue will allow facilitate the Yamato getting to Iscandar. I previously speculated that there might be some rogue faction of second-class Gamilans who will join with the Yamato against the seat of imperial power. With Desler out of the way I suppose that option has become more probable than less.

I’m more curious to see if the series pulls a Voyager with the Yamato. After the beating it took, the Yamato should hardly be space worthy. I’ll be more than a little disappointed if those damages are hand waved away over the course of an episode. Since the Yamato is operating without support from Earth, I’d like to see the consequences of that reality played up in the coming episodes.

Has the brunette who did the radio show in episode 9 been possessed by an Iscandarian ghost? Maybe I missed a subtitle but something really confusing is happening there.

Ensign Yamamoto is angry for the sake of angry, or possibly because she loves Kodai and is jealous of a burgeoning relationship between Kodai and Yuki. Either way, it’s a weak bit of character development.

What sort of PR engine is necessary to keep the Gamilas empire in-line if their fleets are roasting entire planets? At some point you have to invoke Princess Leia’s snark to Grand Moff Tarkin.