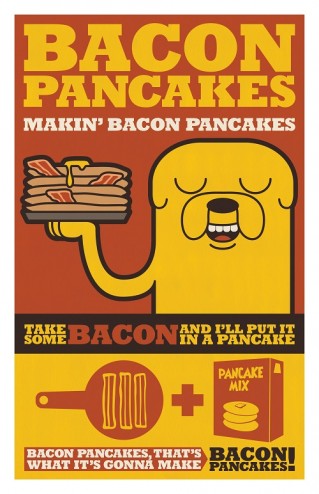 Why hello there. My name is Mark Kowgier, and Adam has graciously given me the green light to write the occasional post for everyone’s favourite review site. I will try my best to write up to the standards he has set, hopefully adding to this site’s focus on gaming and internet culture, while at the same time giving my own take on music, television, literature that fit within that framework. If you like what you read and want more, check out my other work at markk.ca and/or follow me on Twitter @upinmytree.

“And the more Adventure Time I took in, the more confused I became. Even now, with perhaps a dozen episodes under my belt, I still don’t have a sense of the meta-story, assuming there is one to be found.” -Adam

It is on this assumption, that there exists some overarching story that will tie together the endless loose ends that make up Adventure Time, that I humbly take issue with my good friend Adam.

This bewildered feeling he expresses, the sense that surely he has to be missing something, is reminiscent of many of the conversations I had with friends around the time that Napoleon Dynamite became a cultural phenomenon. A small subset of these conversation contained a common gripe: what was the joke?

These people were angry. Everyone else, it seemed to them, was in love with this movie that made little to no sense. They just didn’t get it, and no one enjoys being left out of the joke.

These complaints were and are completely valid. From a rational viewpoint, creations like Napoleon Dynamite and Adventure Time don’t really add up. They are strange self-contained worlds, complete with their own internal logic that seem to be just beyond explanation. And if your goal is to figure them out, you’re in for a frustrating experience because there is nothing to get. Their joke is that there is no joke, no explanation. These are not rational creations, they completely, and utterly irrational.

And that doesn’t have to be a bad thing.There is an argument to be made for the necessity of the irrational. This is where my inner-mathematician starts poking at my innards, trying to get me to go on a tangent about irrational numbers, but we can save that for another (adventure) time. What’s more important here, is recognizing the type of animal we are dealing with, and matching our expectations accordingly.

So if the rational is out the window, then how in the world can possibly approach the wild, irrational, post-post-modern beast that is Adventure Time?

Here is where you have to get cozy with some paradoxes. The irrational is, by definition, undefinable; pi carries on in its randomness further than our imaginations can strech. But that does not keep us from understanding pi’s effect’s on our ordered rational world. And so in the same way that pi allows for the magic of curved lines, Adventure Time leads to it’s own loopy magic .

To help us on this new Adventure, I summon forth 2006 Nobel Laureate Professor Edmund Phelps who, when writing about the spirit of personal adventure, concludes that

Of course he’s speaking about the role of government and innovation in a modern society, but his thoughts can easily apply to the wild tales of Finn and Jake. Take one idea from the professor’s new book Mass Flourishing: How Grassroots Innovation Created Jobs, Challenge and Change. In Prof. Phelps’s telling,

the drive toward modernity began in the 1820s… During this period of enormous creativity, which stretched until about 1960 in the United States, the forces of change were not a handful of brilliant scientists or industrial visionaries like Henry Ford but millions of people who found themselves with the freedom and incentive to create and market a wave of new products and processes. He colourfully depicts these industrializing economies as “a vast imaginarium” brimming with new ideas.

Anytime I see the word imaginarium I get excited.

Adventure Time is nothing more than a vast imaginarium brimming with new ideas. It’s like the kid brother to Troy and Abed’s Dreamatorium. Where Community is a reflection of Troy and Abed’s post-adolescent pop-cultural space-quests, Adventure Time is decidedly grade-school with it’s fascination with Candy, Princesses, and super powers. But despite their age difference, both shows have little fear to tread into new waters, and to try bold quirky ideas.

It’s all in the title. Adventure is defined by quests into the unknown. Where Star Treks explore the dark corners of our universe, Adventure Time explores the wild edges of imagination itself.

Because wasn’t that the best part of childhood? Making up your own tall tales that followed rules that you alone understood, exploring how far your own imagination could take you.

Because it was fun. Sure, the adults may not have understood what in their world you were talking about, but it didn’t matter then. And it doesn’t now.

All that matters is that, right now, there are kids (and adults) watching Adventure Time and feeling that thrill of being caught off guard in some strange land, seeing stories where risk taking and strange thinking can lead great times with pals but also great (and equally strange) danger.

So let the kids have their Imaginarium, I say, even if it never fully makes sense to us rational old folk.

Because, in the least, we will get amazing gems like this:

Which, in turn, will lead to even more amazing gems like this:

Does it make sense?

That, my fellow adventurer, is up to you.