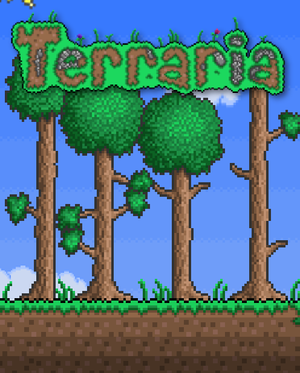 A little more than two years ago I wrote a rather scathing review of Terraria. In fact, I quite unjustly blasted the hell out of Terraria. My arguments against the game shaped up along the following lines:

– Terraria is too cute. There’s no real sense of danger to the game or its monsters.

– Terraria is too slow. It takes forever to find any good materials and they are consumed too quickly through the construction of items.

– Terraria’s crafting system is boring. I want to discover things on my own, not have recipes laid out before me.

– Terraria doesn’t offer a stimulating experience as a creativity engine.

The final point leads to the cardinal sin of discussing Terraria: making comparison to Minecraft. The main thrust of my previous argument against Terraria falls apart under a contrite and public admission that it is wrong to make comparisons between these two games. Comparing Minecraft to Terraria is like comparing SimCity to The Adventures of Link. It’s not a particularly useful exercise once you get past the common points of being a video games designed for human interactivity.

Minecraft is a largely a multiuse game engine. Terraria is an open world game. The most fun I have had in Minecraft emerges out of meta-games that other people have made, particularly The Hunger Games maps, or from the freedom to do whatever strikes my fancy on a given day, such as constructing a solid gold phallus. Terraria is a game unto itself with no third party intervention required. My mistake in the original review was in assuming that the self-directed nature of each game merited a deeper comparison between the two. This was and is not the case.

The recognition that Terraria is a game, and not a game engine, means I should retract my complaint about its crafting system. The options for crafting inform a player’s progression through the game, simultaneously rewarding a player for exploring beyond the safety of their starting biome. Had I approached Terraria appropriately armed with the spirit of exploration, rather than a desire to build things, I probably would have figured this out. Instead, I went on the internet and made an ass of myself. Another small step for man.

Exploration also addresses my complaint about the slow nature of resourcing. One is not meant to play Terraria for an extended duration with starting tools. The goal is to find a cave, mine some iron or tungsten, and make something more efficient. Or failing that, kill some monsters, build a store, and buy what’s needed for future forays into the wilderness. Once again, mea culpa.

My allegation that the game is too cute was informed by not straying far enough out of my starting biome. I stand behind my observation that the zombies look a little too much like something out of Maple Story. Recently witnessing slimes holding umbrellas is also too much of a nod to the quirky for my taste. However, any defense of my previous thoughts has to end at the emergence of Lovecraftian themed monsters, walking face demons, and tunneling worms which evoke a prayer to Shai’Hulud with their coming and going. There’s even a wormsign. How can I have negative things to say about a game that gives me wormsign?

Terraria is deceptively cute, at first. It then gets dark and unnerving the further a person dives into its mysteries. Since writing my initial review, there have been many a times when I’ve entered a new area, witnessed a monster laughing in the face of my puny weapons, and ran home to lock myself in a panic room for fear of the outside world and its horrors. Yes, I built a panic room.

Keeping the above in mind, I hereby apologize to ReLogic, and the internet at large, for misjudging Terraria. The game is certainly worthy of consideration among a demographic who want to discover their purpose in a game without any heavy narrative pointing them in the right direction. My original review was written with far too much braggadocio and not enough of an attempt to understand what Terraria was trying to accomplish. I shall endeavour to not make that mistake again – the exception of course being low budget sci-fi and horror movies, which I shall continue to slag into the ground with all due efficiency and diligence when they spend their money on gun porn and not proper lighting and editing.