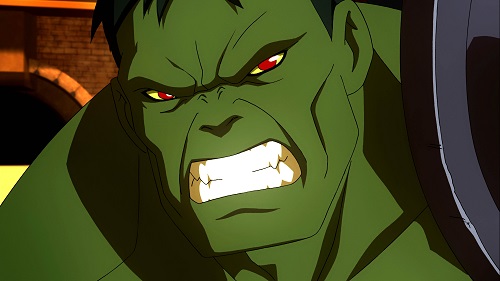 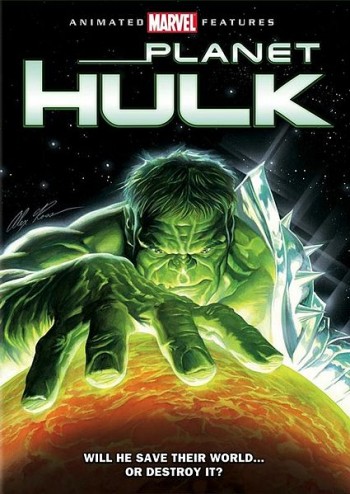 I’ve never been one to watch a lot of Marvel’s animated superhero features. Not-withstanding the 1990s X-Men series, Marvel’s stuff tends to get bogged down in back story, context, and occasionally awful voice acting. Planet Hulk, on the other hand, is all business. That business is taking the Marvel Universe off its PG-13 leash, leaving it to wander down dark alleys in the rough parts of town. The feature is emotionally charged, violent with just a soupcon of body horror, and considerably more interesting than either of the live action Hulk movies.

We open on Bruce Banner’s exile from Earth at the hands of SHIELD. Deemed a menace to the entire world, Hulk awakens in a starship en-route to an uninhabited planet destined to be his new home. A pre-recorded message from Tony Stark, which explains the above, sends the Hulk into a rage; wherein he breaks his restraints and smashes the ship’s navigation system. The careening starship then flies through a wormhole, crashing on planet Sakaar. Weakened from the transit, Hulk gets into a brawl with some of the local insect based life before the ruling humanoids implant him with a “control disk” and enslave him to fight as a gladiator.

Conceptual notes: within this story Hulk never reverts back to Bruce Banner. The Hulk is also reasonably articulate in his calmer moments. Initially, this threw me for a loop as I’m more accustomed to the rampaging monosyllabic “Hulk SMASH” of the 90s cartoon. However, experts have assured me that a Hulk capable of articulation and higher reasoning is accurate to comic canon. And even if it wasn’t, this vision of the Hulk works well enough that I wouldn’t care.

The character’s traditional dichotomy is that of Jekyll and Hyde. We empathize with Bruce Banner because his basic human passions turn him into a rampaging monster. When Banner reverts to human form, he embraces alienation rather than trying to carve out a place for himself in society that either fears him or wants to weaponize him. This movie strips Banner/Hulk of that basic choice. Hulk’s reactions to bondage are filtered through a character of limitless power now capable of understanding just how much SHIELD has betrayed him. As a casual fan of the Hulk, I find this a very interesting direction for the character. I’d even argue it makes him much more emotionally resonant than the typical fodder of a self-loathing Bruce Banner.

As a setting, Sakaar is somewhat reminiscent of Edgar Rice Burroughs’ A Princess of Mars novels. However, the planet quickly takes a turn toward darker places. The red skinned humanoids have brought the planet’s other sentient races under a single common yoke. Slavery within the empire is routine. Dissent against the state is broken through the use of advanced technology and biological warfare. To wit: there’s an absolutely immaculate scene where the Emperor’s lieutenant, Caiera, is attempting to save a village from parasites that turn humanoids into zombie-like monsters. The Emperor responds by calling in airstrike as Caiera, with a child in her arms, flees from ground zero. Caiera survives, thanks to her super powers, but the explosion cooks the child in her arms into an ash effigy.

Within Sakaar’s arena the writing is absolutely honest to the brutality of hand-to-hand combat. We see Hulk and his fellow slaves cleaving limbs from bodies. Rock monsters crush sentient insects until their innards fly forth from exoskeletons. There’s even a scene where Hulk very nearly beats Beta Ray Bill to death.

The ongoing spectacle  draws some obvious inspiration from Gladiator. Hulk’s ability to defeat Sakaar’s greatest champions/monsters gradually undermines the Emperor’s place as a figure of messianic prophecy. The various species of Sakaar begin to see Hulk as the “Sakaarson,” a warrior-savior who will stare death in the eye and bring life back to the desiccated sands of Sakaar. Naturally, Hulk refuses all of these titles up until the end of the movie. At that point the people of Sakaar embrace him as their king, and Hulk begrudgingly accepts that he has found a place where he fits in. Mark the calendar, it’s a Hulk story that doesn’t end with sad walking away music.

Though, I have read that the movie stops short of fulfilling everything laid out in Planet Hulk’s comic arc. Oh paper, Hulk settles down on Sakaar and knocks up Caiera. For reasons unknown, SHIELD sends a self-destruct code to Hulk’s ship, which the people of Sakaar had since turned into a statue commemorating Hulk’s arrival. The subsequent matter anti-matter explosion levels Sakaar’s capital city, killing Hulk’s wife and unborn child in the process. Hulk survives the blast only to declare war on Earth. How dark is that?

If nothing else Planet Hulk has the courage to offer a story that bears no consideration for an underage audience. By and large, I think it succeeds quite nicely along that course. The voice acting is as sharp as any DC animated feature, though lacking any real celebrity pedigree therein. The art is similarly good though stopping short of being great. The motifs and obvious points of inspiration are a little derivative, but they prove to be effective appropriations. Perhaps most important of all is that this is the first time I’ve seen the Hulk as an actual character. Normally, Banner is the character and the Hulk. . .well the Hulk smashes. Planet Hulk shows the casual comic reader a version of the Hulk with a fully formed ego structure, independent of his alter ego. It’s dark and brooding in a way that one would typically expect to see from Bruce Banner. Placing those qualities in the Hulk while mobilizing the Cosmic portion of the marvel universe makes for quite the engaging story.

Based on the Comic by: Greg Pak and Carlo Pagulayan