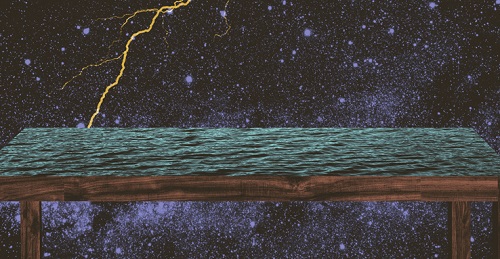 You may not have heard of Jim Guthrie, but chances are you’ve heard his music.

Perhaps it was his soundtrack work for docs like Indie Game: The Movie, or The Bodybuilder and I . Or maybe it was while playing the indie game Sword & Sworcery. Or maybe you, like me, have been following his career since he was playing with some of the best bands in Canadian indie music like Guelph’s Royal City and Montreal’s Islands.

Or, like most people, maybe you just heard this commercial?

Hands In My Pocket was one of the most popular jingles so far this millennium, but this little ear-worm is just the start of what Jim Guthrie has to offer. His 2013 Polaris Prize longlisted album Takes Time is a much more rewarding listen, and it should be: it took ten years to piece together.

In a few days, we will be posting a full review of Takes Time. But to help us properly introduce Jim Guthrie, I sent him a few questions and he sent back a few answers.

What follows is the Preview for Jim Guthrie’s Takes Time.

I started writing the album years and years ago and it is only being put out in 2013.  It’s like an expired package of hotdogs that time traveled to the future trying to pass itself off as something “fresh”.

Jim Guthrie’s music is in many ways, like Time. At first glance it seems simple and tidy. It’s rhythms are consistent, it’s volume never rises to catch your attention. But if you pause and consider it a little closer, if you question it, you can occasionally get the sense of staring at what it means to exist.

I first got this feeling in 2003 when Jim Guthrie came out with Now, More Than Ever. Over the years the album steadily worked its way up to dessert-island status in my collection. Every song strikes a strong balance between Guthrie’s folky guitar, Owen Pallet’s subtle but haunting strings (his performance on this record is rumoured to have helped him land his gig in the Arcade Fire), and lyrics that read like backwards riddles.

The course that Time has set out for Mr. Guthrie is not that of the typical critically lauded artist. He neither burst onto a larger stage, nor faded away into obscurity. Instead he got really into video games. They, along with film scores, have provided with a means to write and record music everyday.

I’m stunned by the fact that I’m still making music and making a living at it. I’ve far surpassed anything I ever set out to do and that was to simply strum a few chords.

It’s hard to make a living putting out an album once every ten years. Yet in this he’s not alone. This past year saw new (and great) albums from reclusive artists like Daft Punk (8 years between proper albums), and My Bloody Valentine (22 years). In all three cases it was worth the wait.

Guthrie may sing that he’s “futuristically out of date”, but Takes Time stands as a good reflection of the increasingly diverse stories behind independent music, and musicians, in 2013.

Time moved very slow for me when I was a kid. I guess one of my first clues was seeing old people and being told they use to be young like me.

As the title suggests, Takes Time still finds Guthrie digging into old questions. But, like anything that has passed the test of time, the songs still feel relevant. As we all sit around waiting for one George RR Martin to get on with it already, the album provides a unique glimpse into why, sometimes, it takes a decade to make something meaningful.

Now I have to answer a million emails and feed the cats, take out the garbage, watch a crappy TV show I feel nothing for followed up with watching a ton of Youtube videos I feel nothing for before I actually get around to making music. Sad but true.

Every moment is a competition for our attention, and that was before GTA V came out (Guthrie calls it “insane”). His album serves as a quiet antidote to these endless temptations, urging the pleasure of the slow, of putting in as much as you take away, of trying and failing.“I’ve tried to move around/ Go underground/ Here’s what I found/ It takes heart/ To fall apart”, he sings on Don’t Be Torn. His lyrics carry a little extra when you consider that Guthrie’s decade-long delay was fueled, in part, by struggles with writer’s block and self-confidence.

Just write and work through it even when you don’t trust yourself or aren’t feeling it.  I’ve learned that it’s more of a crime to not try at all than to write something that “sucks”.  You can never know what’s good or not at the time of writing.  Only time will tell but it’s not even the point.  The point is to do whatever makes you happy and if music makes you happy then you should get over yourself and make it…

The album ends with of Turn Me On, a song popularized by Nina Simone. And so I thought it’d be fitting to end the Preview with Gurthrie’s choice of one other Simone song he loves. Here then, is his reasoning behind his choice of Feeling Good.

I first heard that song almost 20 years ago and it literally had me sobbing by the end of it… you also have to listen to it at a good volume in order to get the full “emotional destroyer” effect it had on me.

Stay tuned for the upcoming review of Takes Time. Until then check out jimguthrie.org.