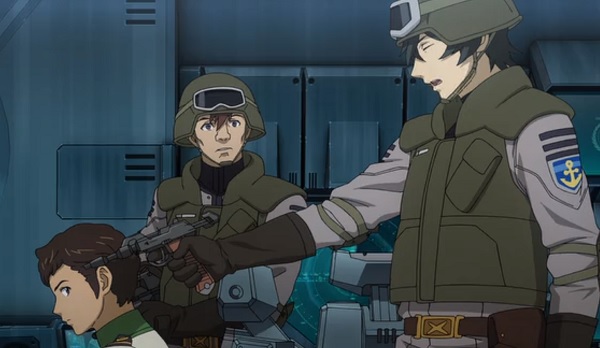 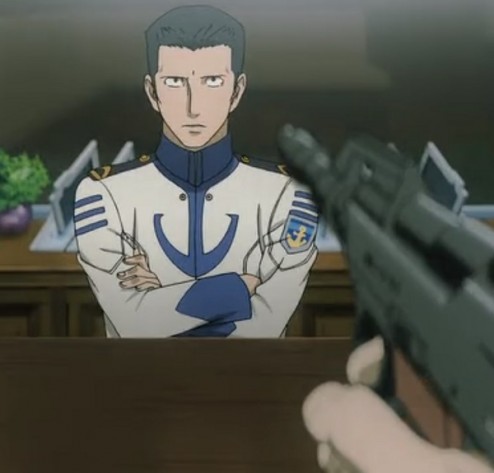 Once again, I find myself of two minds regarding an episode of Space Battleship Yamato 2199. Despite some initial silliness, I appreciate how much this series has grown up from the camp and historical revision that underwrote the original product. Moreover, it’s a great example of what military science fiction can do when it isn’t dependent upon the problematic tropes of military SF as exemplified in the works of David Weber and friends. Yet with each passing episode, SBY 2199 compares more easily to the weak parts of Ron Moore’s Battlestar Galactica, and worse, Star Trek Voyager. Allow me to explain.

Episode 16, A Choice for the Future, sees Lieutenants Ito and Niimi springing their mutiny against Captain Oktia and Commander Sanada.  In doing so, the series demonstrates a considerable commitment to long form story telling. Prior to this point, almost every episode of the series has seen its plot individual plot peppered with exposition that served no immediate purpose. This episode ties each and every one of those loose threads together. It reveals Ito and Niimi as the agents of a faction within the UNCF who wanted to use the Yamato as a means of setting up a refugee colony for humanity. The discovery of Beemela-4 at a time when the Yamato is well behind schedule on its mission to Iscandar is all the pretext Niimi and Ito need to sieze the ship and return it to Earth.

As it stands, the intrigue is quite enjoyable, but it is wrapped up a little too neatly for my taste. The plot goes from mutiny to counter-mutiny in less than twenty minutes. For all the slow burn that the writers offered in terms of setting up this coup d’etat, I expected more to come of it. There wasn’t even any indication that Shima, who had been woo’d by Niimi in the last episode, ever entertained doing anything but supporting Okita and Sanada. By episode’s end everything is set up to return to the status quo. Though I suppose the writers could toss us a curve ball and have episode 17 begin with Ito and Niimi getting tossed out an airlock. If it goes down the path of a court marshal then we’ve officially entered the BSG danger zone. Recall how Ron Moore and David Eick were happy to spin their wheels on intrigue because there was no way to have a battle with Cylons in every episode.

Which brings us to the Yamato itself. The writers turned it into Voyager. That is to say all the damage the ship endured in episode 15, including the destruction of three main guns turrets, is repaired at the start of this episode. I seem to recall the Yamato looking like space garbage at the end of The Point of No Return? Now the biggest problem aboard ship is a lack of working showers. Seriously? Of all the places the writers could have went, they went there. What is the point of blowing the hell out of the ship when there’s a reset button lurking in the wings? Writing like that cheapens the whole experience; it reminds me of a certain British science fiction series that has grown a little too fond of Deus ex Machina.

Then, to make life even easier for the crew, Kodai returns from an away mission to Beemela-4 with a brand new wave motion core, which just so happens to have a map of the warp gate system that the Gamilans have been using. There goes the motivation for Niimi’s and Ito’s insurrection. Now the Yamato can use the gate network to show up on Iscandar’s front door with time to spare.

Even though the episode is far from perfect, it does embody the challenges of telling a decent space opera. If it’s all space battles and pew-pew-pew the narrative becomes vapid and pointless. If it’s all talking, then it’s The West Wing in space. Finding the balance between these two extremes can be a challenge, more so when each episode is only 20 minutes long. So as much as I think this particular chapter of SBY 2199 misses the mark in some areas, I respect it for what it is trying to do.

– Everything that happens in this episode happens on the Yamato. Hopefully the next episode focuses on the looming Gamilan civil war.

– Ito outs Yuki as an Iscandarian to the bridge crew, and nobody really seems to mind.

– Misaki is demonstrating some clear signs of possession/narcolepsy, and nobody really seems to care.

– Niimi gets a little too excited about the prospect of settling on Beemela-4, tipping her hand to Sanada. Confronted by her commanding officer, she confesses her treasonous plans. As in all things, Sanada responds with stoicism. Wouldn’t it be great if the next episode opened with Sanada smashing up his quarters because Niimi betrayed him?