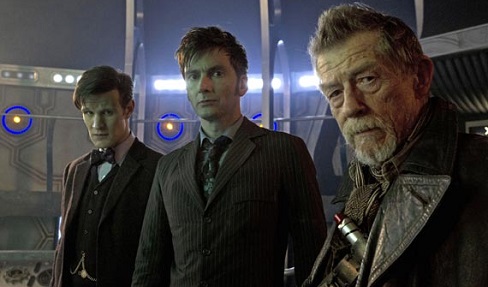 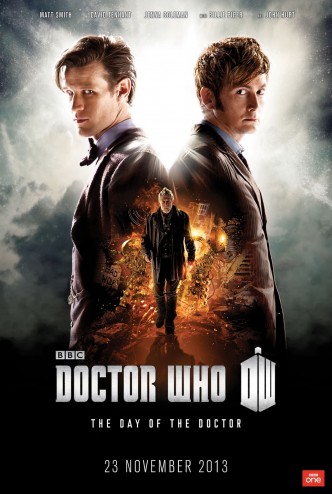 Doctor Who’s 50th anniversary has come and gone. In its wake, Steven Moffat has left the series with the biggest game changer it has seen since its return to air in 2005. Though I am loathed to open up a discussion on if it’s the best episode ever, I will say that it’s easy to make a case for Day of the Doctor as Moffat’s best episode. While there are a number of things this story does well to get there, there is one thing that enables everything else: Moffat comes to terms with Russell T. Davies’ contribution to the series.

Moffat’s stewardship over Doctor Who, especially during his first year as show runner, reflects a pattern of putting RTD’s influences in a box and, like an Argosian king, tossing that box into the sea. At one point, Matt Smith’s Doctor wrote off the entirety of Time War as a bad day. It seemed like only Neil Gaiman’s The Doctors Wife celebrated Doctor Who as science fiction and not a “dark fairy tale,” where paradoxes, unexplained plot holes, and hand waving are the word of the day. Sufficed to say, The Day of the Doctor opening on the final day of the Time War and the wholesale destruction wrought upon Gallifrey during the Dalek siege constituted a significant change in tone. It wasn’t only a narrative shift, but an aural return to the dread inducing quality of Murray Gold’s RTD era Who soundtrack, particularly The Dark and Endless Dalek Night. In a single act the episode embraces the long arc of the Doctor that Moffat largely ignored since David Tennant’s departure from the series. Does it work? Hell yes. Was it missing Christopher Eccleston? Without a doubt.

The episode frames the triad of Doctors as War Doctor (John Hurt), the Doctor who regrets (David Tennant), and the Doctor who forgets (Matt Smith). Make no mistake, the approach works well. Yet, Eccleston’s refusal to come back to the series for Day of the Doctor precludes doing anything substantial with what I’m calling, the Doctor who hurts. Granted, Moffat and company can hardly be blamed for this reality. Still it is hard not imagine how the mixture of wry exasperation and exhaustion seen in John Hurt’s Doctor could have mixed with the open wounds of Eccleston’s Doctor. Just imagine War Doctor viewing his future self as the last Timelord meeting the last Dalek in all creation. Counting the children on Gallifrey certainly defined the stakes of using the Moment, but even a flashback to the scene of Eccleston and the last Dalek would have made the decision all the more personal for  Hurt – possibly giving him a bit more agency in the decision not to use the Moment rather than having Smith suddenly decide to change the past.

Except Smith didn’t change the past, and that’s probably why this episode works as well as it does. While I’ll gladly write off most of what Moffat does with Doctor Who’s mythos as uninspired and boring, the man knows how to have fun with asynchronous story telling. Make no mistake, a genuine sense of fun, rather than the forced fun of something like Dinosaurs on a Spaceship, is what separates this episode from some of Moffat’s other works.In fact, The Day of the Doctor’s best time travel moment is a sonic screwdriver gag that almost feels like it would have been at home in Bill and Ted’s Excellent Adventure.

This brings us to Smith, Tennant, and Hurt coming full circle on the Doctor’s decision, or lack thereof, to use the Moment. The revision is clever in so much that it isn’t a revision. Rather, the peaceful solution to the Time War is a variation of what Moffat did with The Name of the Doctor. Therein, the audience assumed a literal meaning to the episode’s title, and Moffat had fun with alternate meanings to words. The results were divisive to say the least. This time, he came at the audience’s presumptions about established canon and offered a little timey-wimey sleight of hand. Despite the fact that I hate narrative gimmicks, I’m not going to complain about this one. Simply because Gallifrey hidden away rather than destroyed is exactly what the series needs.

The last three seasons of Doctor Who were, at least in my view, a failed experiment in long-form story telling. We knew there was something big and bad out there, but didn’t get a great sense of who it was, what it wanted, or how the Doctor was involved in any consistent way. How can the hero have a journey if the audience is unclear on the quest? I don’t think he can. Which is why Doctor Who staggered from one episode to the next with all the consistency and focus of Robin Williams’ stand up routine before he got on the wagon.

Ending The Day of the Doctor with Smith’s monologue about going home gives the Doctor a Silver Surfer like quality. Rather than being a god-like figure who needs clever earth girls to direct him on a quest to nowhere – and serve as a moral compass – the Doctor now posesses an internal purpose, four lifetimes in the making, independent of whoever is in the TARDIS. More importantly, it grounds Moffat into a certain trajectory with his long-form story telling. I expect Moffat will approach the Doctor finding Gallifrey with his usual bag tricks, but there’s no escaping the gauntlet he’s thrown at his own feet in terms of an objective.

For all these positive points, it’s equally hard to overlook the fact that The Day of the Doctor did a shoddy job in wrapping up the obvious subplot about a Zygon invasion of Earth. The episode cuts away from double blind negotiations between U.N.I.T. and the Zygon commander, leaving the audience to assume that everything gets worked out for the best. Or perhaps the negotiations break down into a Torchwood-esque blood bath, and as per Gwen Cooper’s Children of Earth sentiments the Doctor couldn’t stand to look at humanity. Either way, I’m calling that one a party foul.

Yes, I just invoked Torchwood, and I don’t apologize for it.

That aside, there’s really not a lot to complain about within this episode, even for an implacable nerd like myself. It brought together the best of RTD’s dark and grown-up Doctor Who with Moffat’s ability to have fun and do clever things with time travel. The temporal paradoxes were kept to a minimum, save for the fact that I don’t see how all of the previous incarnations of the Doctor – and Peter Capaldi – could have arrived at the Time War. I suppose the Moment had something to do with that. Tom Baker showing up in the penultimate scene nicely bridged classic and nu-Who to the extent that I suspect that Elisabeth Sladen – were she alive – and not Billie Piper, would have been tapped as the Moment’s interface. It would have offered a nice symmetry as Four and Sarah Jane were on scene for the start of the Time War – I think – in Genesis of the Daleks and now we see him once more at its true end.

All in all, The Day of the Doctor is an episode befitting the 50th anniversary of Doctor Who.

– Conceivably the Doctor used the Moment to time lock the events of the war without burning the universe. Does that mean all the worlds in the Time War, like Skaro, are hidden as well?

– Considering the above, could the Master and Rasillon are still alive on Gallifrey?