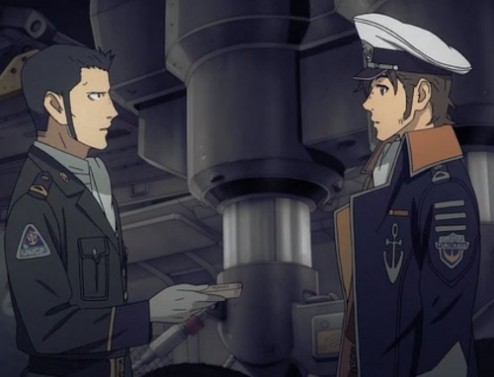 I think I’ve finally figured out what SBY 2199 is missing: moral courage. This series constantly flirts with greatness, but never quite seems to deliver it on a consistent basis. For every stand-out episode, there are three more that feel like place holders. Prior to Out of the Forest of Memory, I couldn’t find a way to explain this phenomenon. Now I think I’ve finally struck upon a suitable explanation. Space Battleship Yamato 2199 lacks the moral courage required of a war story, and this is the episode that proves it.

The episode’s almost exclusive focus is on activating a subspace gate that will transport the Yamato 30,000 light years closer to Iscandar. Therein, Kodai, Yuki, and Sanada board the derelict gate’s control satellite. Since a simple repair job would make for a boring episode, we’re treated to flashbacks of an almost love triangle between Sanada, Niimi, and Kodai’s older brother, Mamoru. The exposition strikes as little more than backfilling for Sanada.

Any intelligent viewer should then ask why the story is backfilling on Sanada. What’s the point of establishing a best bro’s relationship between Mamoru Kodai and Shiro Sanada if not to torture Susumu Kodai with the loss of another link to his family? So when the story reveals that the only way for Sanada to activate the subspace gate is at the cost of his own life – thereby demonstrating some cosmically shitty design on the part of the race who built the gate; wherein turning the damn thing on requires the death of the initial operator – it presents a poignant demonstration of the cost of war.

Sanada’s backstory is also apropos of the series’ running theme that a solider has to have the courage to know when to disobey orders. Both Captain Okita and Lt. Commander Sanada dwell upon this maxim in the episode. Okita does so when he reveals to the crew that the Yamato’s resident Iscandarian is not Yuki but the biological core of the ship’s automated navigation system. I do believe that I saw this appropriation of Homeworld coming a few posts back.

While Okita finds the courage to disregard orders, Sanada recalls for Kodai his inability to do the same. With death from radiation poisoning at hand, Sanada’s confesses that he knew the Battle of Pluto, which we witnessed in the series’ first episode, was nothing more than a decoy operation. Sanada let Mamoru Kodai go to his death thinking that he was making a valiant last stand, rather than being thrown under the bus by the UNCF. Kodai, however, doesn’t care about Sanada’s dedication to orders. Rather he appropriately sees Sanada’s looming death as the loss of a connection to a family completely killed off during the war.

Every rule of writing screams that Sanada should die in this episode. Kodai practically begs for last second knowledge of his brother in the face of Sanada’s inevitable demise. When subspace gate activates and Yuki’s scanner registers lethal levels of radiation in the control room, it should be another kick in the stomach for Kodai. Instead, Sanada climbs out of some conveniently placed water and points to handwavium as the reason for his survival.

Weak sauce, SBY 2199. It is, in fact, the weakest of all sauces. Sanada’s an otherwise boring character who adds little to the show save for severity which is best described as Mr. Spock meets Mr. Potatohead. This episode was a perfect chance to kill him off at his most human. Instead of exploring how war demands sacrifices on the battlefield, we get saddled with Kodai feeling a new sense of little brotherly affection for the Yamato’s XO. Pair this with the fact that it seems increasingly likely that Dessler isn’t nearly as dead as everybody in the Gamilan high command thinks (I have no evidence other than a shocking amount of hubris from the acting Gamilan commander), and the stakes of this war story seem quite cheap.

I suppose there’s some small comfort to be found in the fact that the Yamato’s destination once it exits the warp gate is none other than Balun. Balun, a heavily fortified Gamilan transit hub. Balun, the planet where the chief usurping Gamilan just ordered his fleet.

Yet you’ll forgive me if I don’t get too excited. Remember that the last time the Yamato saw a firefight the inevitable consequences were undercut with a plot contrivance.

Find your spine, Space Batttleship Yamato 2199. Otherwise this is going to be one very unremarkable endgame.

– At the end of the episode Misaki announces herself as Yurisha Iscandar. I think we all saw that one coming.