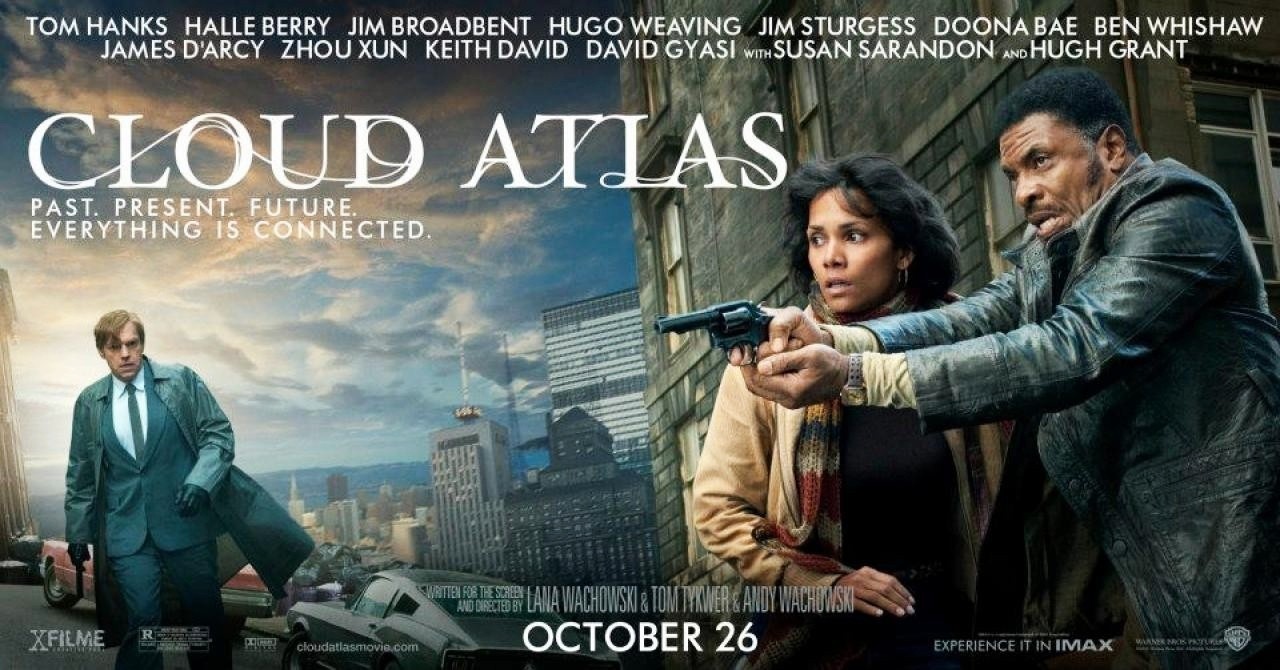 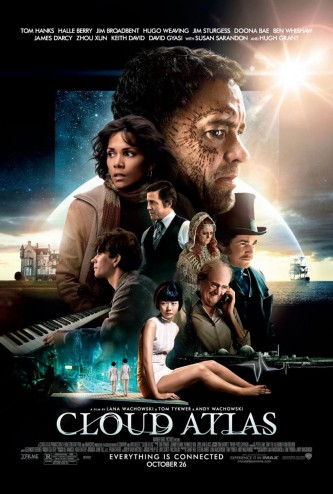 Cloud Atlas typifies why it is difficult to execute a good, single author short story anthology. Unless both author and editor are uniquely talented, there’s a very good chance that “B” and “C” grade stories will get lumped in with the truly outstanding material. While a print anthology at least offers the freedom to quit a particularly dull story, Cloud Atlas has the audacity to assume that each of its narratives is as important as the others, interweaving them together so that a piece may never be separated from the whole. Without having read the novel, I can’t say if this is a stylistic choice born of David Mitchell’s authorial prerogative or the Wachowski’s blundering attempt at moving toward the art house.

Bearing in mind that no novel ever fully survives translation to film, even a lumbering, three-hour monstrosity like Cloud Atlas, I’ll limit my criticism to the Wachowski siblings’ failure to convince me that each of the film’s narrative threads merited equal screen time. Though the entirety of the film is beautiful to behold, for what are the Wachowskis if not masters of making otherwise pedestrian things look pretty, only one of the film’s arcs offered anything in the way of  narrative subtext: the tragic tale of Sonmi-351.

The presentation of Korea circa 2144 is measured and precise. It surrenders just enough detail about a world of corporate entities and its cloned subclass of humans – think along the lines of Robert Heinlein’s Friday or the much more sophisticated artificial people Paolo Bacigalupi’s The Wind Up Girl – to make a viewer want more. It also avoids science/speculative fiction’s greatest sin, info-dumping as to show how we got from point A to point B. There’s also a fantastic emotional resonance between James D’Arcy and Doona Bae. If only I didn’t have to sit through the dribs and drabs of the movie’s other five other stories, alternating between curiosity,  frustration, and outright boredom therein, before getting more of what I really wanted.

With due deference to Cloud Atlas’ inferior offerings, not all are loathsome clunkers. The Luisa Rey Mystery evoked a certain high-blaxplotation charm. Yet its inability to meaningfully convey the inherent racism of 1970s America pulled me out of my disbelief. The Wachowskis had the courage to broach Luisa as a woman in a man’s world, but sidestepped any potential for serious racial discussions. As such, the whole affair comes off as a little too sanitized for my liking.

The Ghastly Ordeal of Timothy Cavendish is equal parts The Great Escape and Benny Hill. Thus it is quirky, charming, and a little sad. Though as a critic I take some level of personal umbrage with The Ghastly Ordeal’s catalysing event. Having an oafish one-off of a character toss an esteemed literary critic from a balcony over a bad review of a book that has no importance to the film, which mercilessly reminds the audience that “everything is connected,” strikes as pre-emptive attack against an sort of intellectual dissection.

Throw the people who think from the balconies; they’re not welcome here. This movie is for people who want to feel simple feelings without any critical thought.

And feel things you shall through Cloud Atlas’ ham-fisted stories of historically incorrect slavery, unrequited love in the time of British propriety, and the redemption of Tom Hanks’ from the space devil. I’m not joking. One of Hugo Weaving’s roles is the post-apocalyptic space devil.

It’s unfortunate how easily, or is it shamelessly, this movie goes from a space devil in a top hat – yes Hugo Weaving’s space devil wears a top hat – to a poignant allegory on consumer culture and environmental change. When so much of Cloud Atlas is obvious and shallow, i.e. slavery = bad, there’s a world of depth to Sonmi’s meagre 1/6th of the movie. Why the Wachowkis’ blended the stories instead of offering a proper anthology of short features, with Sonmi as the capstone, is beyond me. With her tale of self-sacrifice as the coda to this bloated colossus, I would have been more inclined to forgive some of Cloud Atlas’ weaker aspects. At least that structure would have seen the movie building toward something. Instead, I’m left wondering if these stories are, in fact, so dull and impractical as stand alones as to necessitate tricking the viewer into caring more about them through some sort of cinematic withholding.

Notwithstanding one ancillary character, the Wachowskis connect these stories with nuance befitting bank robbers rounding up their hostages. Other than the obvious fact that all the hostages were in the same bank at the wrong moment, there’s nothing that unites them in a deep way. To compensate for this, Cloud Atlas offers no short supply of exposition about lives being connected, but most of it is as tiresome as a C- undergrad, who has just had their first exposure to a Hindu philosophy on the eve of the course final. We get it, we saw Pay it Forward. Everything is connected. Can we possibly move on?

In the end, the Wachowskis managed to steal another three hours of my life. They used the slightest germ of narrative beauty to keep me from going and doing something more productive when every instinct within me screamed that Cloud Atlas is a piece of crap.  Well played, Wachowskis; I can’t wait to see what self-important turd you serve up for Jupiter Ascending.