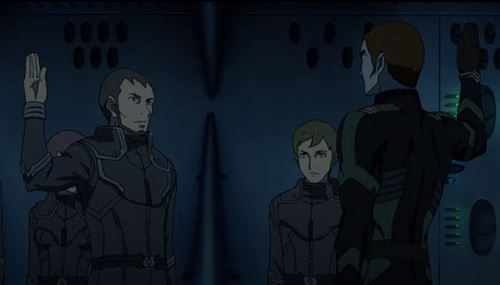 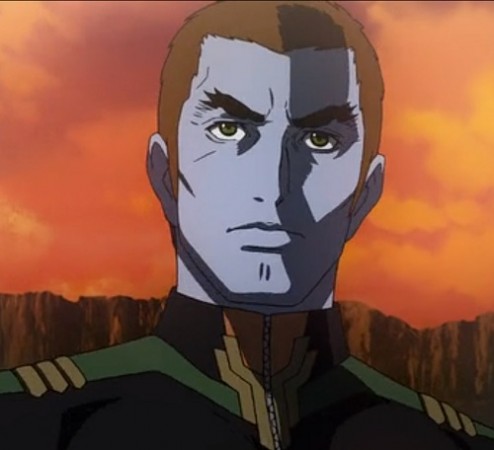 Full disclosure: at the time of this post, I have already watched episode 20 of SBY 2199. After some initial misgivings over the quality of episode 19, I intended to review the two episodes in a single post. A subsequent re-watch of both episodes led me to believe that nineteen, though somewhat slower paced that other episodes, is worthy of its own entry. Bearing this in mind, I shall do my best not to let foreknowledge of the series taint my review of the chapter under discussion.

In terms of moving the plot, They’re Coming, does very little. My initial conclusion on the episode was that nothing happened. The Yamato, now 90 days ahead of Gamilas’ main fleet, aims to keep its advantage by plotting a course through a dangerous nebula. Domel, restored to command with Desler secure in his leadership of the empire, anticipates Oktia’s maneuver and leads a small flotilla of carriers to intercept them. Both sides launch fighters, and the story ends on a cliff-hanger.

“Great, more wanking,” I thought. On the surface, this episode seems to revel in the sort of stalling that the audience had to endure as foreplay to the Battle of Balun. Yet on the second watch, I caught myself marvelling at just how engaged I was with the Gamilan side of the story. It’s clear now that there is more to the Gamilans than over-the-top Nazi caricatures. Make no mistake, those aspects of the Gamilan national ethos are still in play. But this episode presents a depth and originality to Desler and his people that has otherwise been absent within the series. One scene in particular digs deep on the idea of Gamilan identity.

Remember a few episodes back when Celestra employed a psychic attack against the Yamato? In the aftermath of that botched mission, Desler learned that there is an Iscandarian aboard the Yamato. He, like seemingly everybody else on the Yamato, mistakenly assumed it to be Lt. Mori. In order to maintain the status quo with Iscandar, Desler orders Domel to recover Yuki before destroying the Terran ship. To do so, Domel employs a strike team of pale skinned second-class Gamilans from the planet Zaltz.

Where we’ve seen other second-class Gamilans acting a reticent agents for the empire, these particular soldiers are even more patriotic than some of their blue-skinned counterparts, despite racial scorn that the latter heaps upon the former. When one of Domel’s officers voices his doubts about the loyalty of Zaltzi-Gamilans, they respond by singing the Gamilan national anthem.

Planet where the blue flowers blossom

Sing a song of joy

May god’s grace always be with us

Hail to the victory of our home

These Zaltzi see being Gamilan as an identity that transcends their original nationality. Granted, the distinctions are arbitrary given that we know even a blue skinned Gamilan is physiologically identical to a terrestrial human – thus reminding us of the series’ anti-war conceit in that we are all the same within the vastness of the cosmos. I’ll also concede that this probe into identity is probably nothing more than a shallow commentary on the fallacy of the master race i.e. there is no “master race” just delusional people who buy into the words of a demagogue. Still, this sequence is done with slightly more aplomb than we’ve seen from the series to date. Furthermore, SBY’s tendency to telegraph future events means that there is probably a reason we’re getting this insight into the social structure of the Gamilan empire. Perhaps a Gamilan civil war isn’t off the table for the third act.

They’re Coming might not be the most action heavy episode of the series, but is the first time that the series has convinced me to care about Gamilan identity as a diverse thing. I’ll go so far as to say that I wouldn’t mind watching a short run series set on Gamilas. Though the Gamilans may have began, both in the original series and in this one, as a send-up of Nazi Germany, they  now seems more genuine to an external sense of self.

Stay tuned for episode 20, where things blow up.

–  Standing on the deck of the space submarine, Desler looks down on Gamilas and asks, “What point is there in clinging to this planet.” Desler might have begun as a thinly veiled Space Hitler, but I think it’s fair to say that the character is evolving away from that.

– Yurisha Iscandar, still in possession of Misaki’s body, marvels at the technological horror of the Wave Motion Gun. In a conversation with Captain Okita, she condemns humanity as no different than Gamilas in its love of destruction. Despite the strategically placed copy of War and Peace on Okita’s desk, she might not be far off the mark.