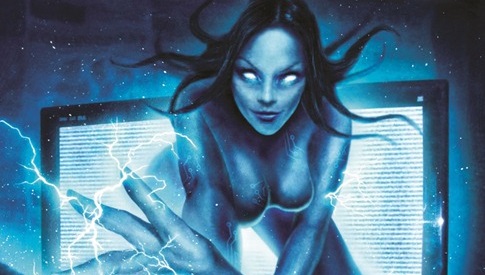 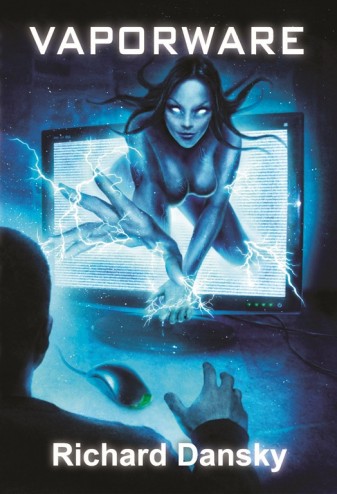 Based on the cover art alone, I expected Vaporware to be a twenty-first century adaptation of Weird Science. Instead, I met Ryan Colter, a video game designer with an absolutely terrible work/life balance. As it turns out, my timing in starting this novel could not have been more serendipitous; as Vaporware was a reward for finishing a massive project at my day job. Therein, my boss once joked that I had been sleeping with the project as if it were a mistress. Though the overlap between Dansky’s character and my own life was minor, at best, it was sufficiently measurable as to immediately make me take my partner out for dinner.

In terms of classification, Vaporware falls somewhere between urban fantasy and science fiction, yet the genre elements within the novel are slight. The book largely functions as both a window into the not-so-glamorous world of video game design and as a scathing criticism of the same. When an indifferent publisher cancels Ryan Colter’s dream project, code named Blue Lightening, I was reminded of what a friend told me when he was working for Dice about seven years ago: “Game design is terrible, I’m applying for a job in business applications. Nobody should have to work like this.”

When we then consider Mr. Dansky’s impressive track record as a game developer and game writer, it is tempting to approach Vaporware as something of semi-autobiographical parable. Naturally, any attempt to discern fact from fiction would be idle speculation. Of course the question of whether or not Ryan Coulter is an avatar for Richard Dansky is far less important than the obvious strength of the novel’s narrative voice. Much like reading James Clavell’s Shogun makes a person feel like an expert on feudal Japan, so too does Richard Dansky offer a decisive, and almost voyeuristic, window into a sub-culture all its own.

As a narrator, Ryan Colter is something of an interesting figure. Despite being likable and well intentioned, Colter is self-involved, self-sabotaging, narcissistic. His story arc is a downward spiral of broken relationships, both professional and personal. Colter says, “I can change” with the pathetic delusion of a drug addict in denial. At the same time, his shortcomings all stem from a genuine passion for his work. The character is such an auteur in his own right that I expect he would resonate with any reader who  engages in any manner of creative work. Indeed, it’s not too much of a stretch to imagine how, if a few variables were changed, one of my friends (or even yours truly) could become Ryan Colter, ever beset by the best of intentions but ultimately unable to leave the project alone.

Mr. Danksy is also clever enough to deny readers an explanation for Vaporware’s central mystery: how has Blue Lightening transformed from computer code to physical being? Arguably, providing an answer beyond the book’s metaphysical clues would  necessitate a stockpile of weapons-grade handwavium. I have no doubt such an act would alter the book’s narrative trajectory far from a parable on work and into the domain of terrible Star Trek and Doctor Who plots. As it stands, Blue Lightening is a personification of every project that demanded more of those who worked on it. She is the siren song of work-guilt (a thing I first felt in grad school when spending time on anything other than research and writing felt like time poorly invested) and the “just one more turn” phenomenon that the likes of Sid Meier and Julian Gollup used to rob gamers of sleep and productivity.

Blue Lightening also works as an observation on the female form within gaming. When Ryan conceives of Blue Lightening as a character, he does so intending for her to be cool with a hint of sadism, as to appeal to the multiplayer gaming crowd. When she emerges into the real world, it is as a manic sex kitten version of Halo’s Cortana. And just like Cortana, who within the Halo universe began as the Master Chief’s partner, Blue Lightening devolves into a character whose agency is subject to a male figure. This in of itself may not be a scathing condemnation of how women are often depicted in games – overly sexualized, somewhat vapid, male power fantasies – but it is an accurate representation of the contemporary zeitgeist.

A reader has to make the conscious act of reconciling Blue Lightening with the novel’s flesh and blood characters to truly see the criticism on how gaming, and maybe even the media at large, treat female characters. Blue Lightening is quite intentionally a shallow character compared to the two real women in Ryan’s life. The latter exist as fully formed individuals, in stark contrast to the one-dimensional caricature that is Ryan’s passion project. The message is, perhaps, a little oblique, but it’s none the less there for any reader at all familiar with the ongoing dialogues on women in gaming: even with the best of intentions, women in video games rarely compare to their real-world counterparts.

Ultimately, Vaporware, is a cautionary tale against letting a passion for work become a sole focus of a person’s life. The narrative voice is so effectively compelling as to make a reader feel privy to the daily comings and goings of video game development. Despite being set in and about a game studio, Vaporware offers broad appeal to all creative individuals, not simply those who are heavily invested in gaming as either a producer or consumer. In short, if you’ve ever neglected friends, family, or relationships for work, you would do well to read this book.