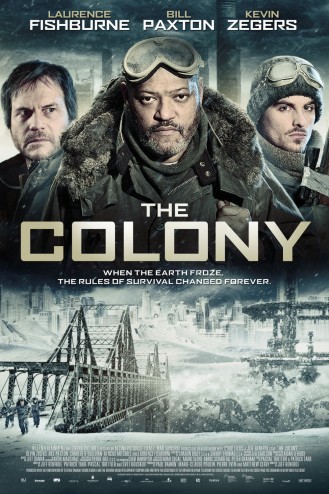 A quick Google search for The Colony reveals a movie with the dubious distinction of a 16% on Rotten Tomatoes. However, the sheer and unadulterated acrimony directed toward this movie gave me some pause for consideration. It’s my observation that critics love nothing more than a good pile on, especially when it comes to misunderstood diamonds in the rough. Sadly, The Colony is no such hidden gem. Rather it is an interesting example of how a movie can offer little in the way of meaningful characters, conflict, and visuals, and still manage to get made.

The set-up for this frosted failure is nothing the average genre viewer hasn’t seen better executed in other movies. For one reason or another, the Earth’s surface is wrapped in perpetual darkness and snow – also known as Winter in Southern Ontario. Laurence Fishburn leads a small colony of survivors, who have taken up residence inside a seed vault. Despite keeping hope alive, all is not well within this colony. A protracted and clumsy voice over  from Sam (Kevin Zegers), the colony’s resident guy who has sex with sexy ladies, informs the audience of a virulent strain of influenza that ravaged most of the colony’s population. The survivors of the survivors have since been turned into an ill-tempered herd of germophobes.

“Ah ha,” I thought to myself as Fishburn’s goons locked a married couple into an isolation chamber for showing signs of infection. “Clearly this is going to be a movie that probes into Foucaultian rights of the individual to decide when they are sick. On the one hand state actors will do unspeakable things in the name of the greater good. Meanwhile Fishburn’s and Zegers’ characters will champion individual rights. I am so smart for figuring this out.”

I managed a solid five minutes of feeling extraordinary smug at my ability to deduce what so many of my critical peers had obviously missed. Minute six of my victory tour saw the movie going off the rails, and with it my hope for an intelligent story. Instead of a debate on rights, I witnessed Bill Paxton’s transformation into an amalgam of every heavy handed cliché of dystopian pragmatism known to science fiction. Meanwhile, a distress call from a neighbouring enclave of survivors sees the plot switch gears into a rescue mission. Yet the transition and execution therein is so dull that I found myself thinking about the ways in which a colony sealed off from the world could randomly generate an influenza outbreak.

How would the virus stay alive on a perpetually frozen surface bereft of animals acting as a vector? If the colony has a test for the flu, and new, asymptomatic survivors are the most likely vector for infection, couldn’t they have just tested all new arrivals on their way in? And thanks to walking sequences that would put Peter Jackson to shame, I had ample time to ponder these thoughts.

Yes, I said walking sequences. Is there anything less exciting in a movie than watching the characters walk and offer small talk as bad exposition? I’ll abide that in Middle Earth, if only because there’s something visually appealing to the setting. Unfortunately, there’s no such consolation in The Colony.

When Fishburn and his intrepid duo arrive at the distressed colony, the movie shifts gears once again, paving the way for a “feral human” zombie apocalypse. It is as if the writers realized that the first half of the movie was devoid of any meaningful conflict, so they attempted to cram an entire feature’s worth of action movie tropes into the remaining forty-five minutes. With the death of Fishburn’s character signalling the end of the second act, the story confirms all of its past telegraphing of Sam as the story’s true protagonist and humanity’s only chance at salvation. Snore.

It’s quite a shame, really, since Mr. Zeger’s character offers all the charm and charisma of a half-boiled potato. Certainly Zegers is capable in his portrayal of a partly cooked tuber, but I doubt any actor could have rehabilitated the utter tedium with which Sam’s character is crafted.

The would-be hero’s return home sees an utterly unsatisfying wrap-up to the movie’s two central, but uneven, conflicts: Bill Paxton’s character being draconian ass-hat and the looming horde of feral humans, who have somehow lost the ability to speak or feel empathy but maintain the ability stage a complex siege of a fortified storage facility with nothing more than their bare hands. Apparently the apocalypse brings out the MacGuyver in everyone.

Even the third act’s action sequences are as derivative as the tropes they personify. I won’t begrudge the ambition that the movie is attempting to bring to bare in its final minutes, but the camera work is so shoddy, the fight choreography so dull amid constant cut-aways and reverse angle shots, and the stakes so utterly lost under two feet of snow that it’s hard to feel anything but relived for the end of what is otherwise a very long walk for a small drink of water.

The real tragedy of The Colony is that it didn’t have to be this way. The cast is competent enough despite the nonsense they are forced to spout. The visuals are suitably grimy and industrial as to evoke a good sense of the end of the world. But rarely is it so obvious that a movie was written by committee as in The Colony’s utterly inconsistent and unbalanced story. This attempt to homogenize the zombie outbreak and killer virus tropes into a single glass of post-apocalyptic milk is an abject failure.