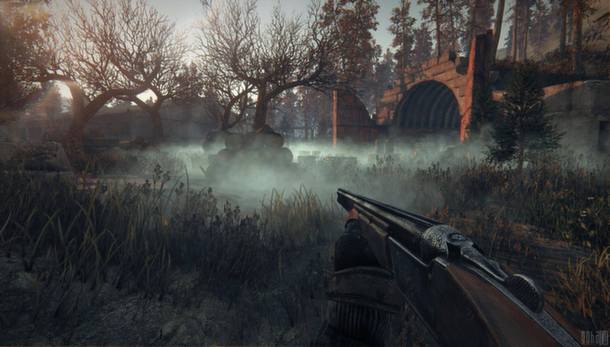 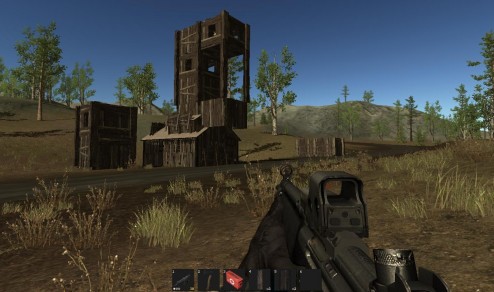 Last week I talked about my first five hours playing Rust, Facepunch Studios’ multi-player survival game. In today’s post I dig a little deeper in to the construction, psychology, and player interactions that I’ve enjoyed after spending more than a full day of my life grubbing for metal and shooting bears with arrows.

First up, the darkness. There’s a lot of in-game text chatter when Rust Island switches to its night cycle. Only the well armed and/or truly stupid move about at night. The rest of us hold up in our shelters, clinging whatever weapons we have while straining to hear the terrifying sound of another player’s footsteps encroaching upon our territory.

On one particular day I logged into my Rust server and found myself naked, in a field, under the pale moon light. A quick “WTF” in the chat was answered with a casual, “You got raided and murdered in your sleep, son. Welcome to Rust.” Somebody else chimed in with the following maxim, one that I’ve since considered to be a defining ethos for the game: “In Rust, you either die naked and alone, or live long enough to become a cunt.”

Alone, unarmed, and in unfamiliar surroundings, all I could do was sit and wait for the sun to come up. Fortunately, I wasn’t too far from my original shelter. I returned to the scene of my murder and found both my primary and secondary shacks smashed and looted.

Starting over from scratch isn’t nearly so daunting once a player knows how to manage their first day. I moved to a new section of the map and began to rebuild. This time, I set up four shacks in a low-density area of the island, just north enough of the main settlements to be out of the way, but close enough to metal nodes and animal trails to keep resourcing relatively easy. It didn’t take long before I mined, collected, and hunted enough resources to ensure my short-term survival.

Then the worm turned for me. I took out a zombie with an arrow to the head, (eat your fucking heart out Katniss Everdeen) and in its possession was the blueprint for a 9mm pistol. I quickly studied its secrets before running back to my house and crafting my first real gun.

Armed and dangerous, I stumbled upon a person with a pick axe, one of the best mining tools in the game. Instantly, I brought up my gun, jammed the key to turn on my headset mic, and ordered him to freeze where he stood.

I didn’t expect him to beg for his life.

He told me he had just made the pick axe. He was out mining metal so he could make proper doors for his shelter. He dumped some food and anti-radiation pills on the ground as a peace offering if only I would let him live. I’m not sure if I have ever felt a power like that before. I could finally see how Rust turns people into assholes. It would have been so easy to put two in his chest and one in his head. I could have had everything of his, not just what he was willing to part with.

Rather than risking a reputation as a fully fledged bastard, I let the guy go. Though I did take his offering. Fear is a powerful tool, and I wasn’t keen to part with that.

After witnessing the power of the gun, I was determined not to lose it. A little research into the fragility of early structures led me to believe that without a proper wood house I was asking for a repeat pillaging. So I gathered up my worldly goods, and set out into the mountains. It didn’t take long to find a perfectly concealed hiding place for my first permanent home. With a metal door in play, the shelter would be impervious to anything but demolitions charges and other explosives. The house also garnered a 24 hour reprieve from decay.

What’s decay, you ask? Decay is a clever game mechanic that prevents urban sprawl on a server. After 24 hours of inactivity, a wood house begins to decay. Without regular occupation and/or maintenance, walls and ceilings will wither into nothing. I got my best lesson in decay when my server population dropped by about 80%.

A once robust and well populated island turned into a ghost town. Nearly over night I went from a half naked man with a 9mm, to a man clad in head to toe in Kevlar, touting an M4 with a laser scope and suppressor. Resources were abundant and easy to mine without fear of other players lurking in the bushes. My one room wood house rapidly expanded to a eighteen room labyrinth with multiple safe rooms.

I still ran into other players from time to time, but armed like the T-800 I had little to fear. I gave food and equipment (not guns) to all those who passed me by. I took righteous judgement upon a troll who gunned down a pair of naked newbies  running as a team. In between the mining and philanthropy, I turned my house turned into a fortress.

In fact, I spent so much time experimenting with the game’s crafting engine that I built a structure tall enough for a daring thief to consider jumping from the peak of a neighboring mountain on to my sanctum. Like Icarus, I thought height would make me invulnerable. Instead, I set myself up for an easy breach through the penthouse. The only solution was to build even higher.

Once again, Rust proved to be a study in psychology as well as an exercise in survival. At first, I feared other players would kill me and take my stuff. I ran and hid like so many forest herbivores in the face of a pack of wild dogs. Gradually that fear mutated into paranoia over the destruction of my worldly possessions. I saw people milling near my mountain hideout and thought to myself, “You should kill them so they don’t find your home.”

Despite my best efforts to stay a decent person, Rust was trying to turn me to the dark side. The Bush doctrine almost became a part of my game. Since I built something big, would people assume that there was something worth stealing inside? Would the few people left on the server see my building standing among the ruins and think, “Let’s burn it.” If I shot people from my crow’s nest would they come back to investigate their corpse upon re-spawning?

For all my scheming, I couldn’t remember the last time an MMO offered this level of engagement. Game writers who set about crafting a player engaged narrative must dream of producing the kind of moral and psychological quandaries that I faced as a power player in Rust. Even with the best of intentions to not be a troll, I still found myself rationalizing potential player kills as a means of securing my own little in-game dominion.

In the face of these decisions, I wonder what is going to come next? Conceivably, I’m now at the limit of what can be done with Rust in its current build. Other than the fun of rinsing and repeating on a more populated server, there probably won’t be too many new things for me to explore until the developers build them into the game. That said, it’s still early days for Rust, and I’m hoping that it grows enough that I can have a renaissance or two with the title.