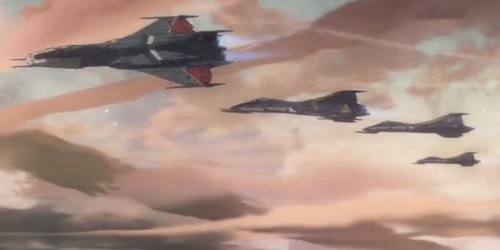 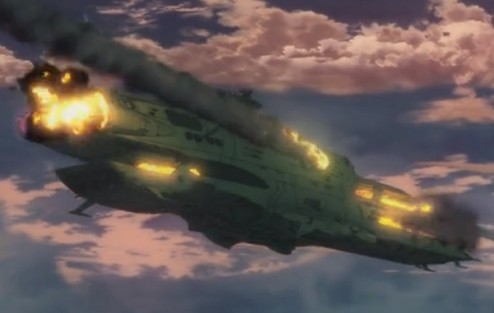 Episode 20, Under a Rainbow Sun, resumes the story that began in episode 19. We open on the Yamato and Domel’s battle group poised for a dramatic showdown within the Rainbow Nebula. As the battle unfolds, the audience is treated to a pretty fantastic episode. Yet the story still falls short of greatness due to an ending which, once again, demonstrates Yamato‘s fatal flaw: an unwillingness to employ the narrative courage incumbent upon a war story.

While it would be easy to dwell on the episode’s weak ending, the balance of the story finally sees the series raise the bar on telling an honest war story. Fighter pilots, both Terran and Gamilan, die in doves during a ranged battle which quickly devolves into a knife fight between capital ships. What’s remarkable is the way the writing establishes these disposable characters as empathetic figures before ruthlessly killing them off.

One such example sees a Yamato pilot unable to reconcile the fortunes of war, in that sometimes a soldier doesn’t see a lot of action, against an internal sense of cowardice. I recall seeing something similar in Joe Haldeman’s The Forever War and John Scalzi’s Old Man’s War. Sometimes soldiers don’t get a chance to fight, yet they still have to watch their friends prove their valour, often dying in the process. This feeling of inadequacy instantly resonates with a viewer, thus making the pilot’s suicidal solo attack against a Gamilan carrier all the more meaningful. We knew nothing about this character before the episode. We won’t learn anything more about him now that he’s dead. However, he’ll likely be one of the series’ most memorable figures simply for the fact that the writer’s masterfully followed the maxim of showing rather than telling his limited arc.

Chaos quickly becomes the episode’s watch word as Domel’s fighters warp ahead of the carrier group to strike at the Yamato. This second wave of Gamilan fighters destroys the Yamato’s radar, allowing the space submarine to deploy the Zaltzi infiltration team. Recall from last week that Desler thinks Yuki is Iscandarian royalty. He has taken it upon himself to liberate her before destroying the Yamato.

If the death of so many Terran fighter pilots didn’t signal a raising of the stakes for the episode, then the Zaltzi infiltrators shooting, and seemingly killing, security officer Hoshina, whose actions were key in stopping Lts Niimi and Ito from executing their coup against Captain Okita, certainly indicates that all former bets are off.

Witnessing Hoshina’s apparent death and XO Sanada taking charge of damage control teams from the infamous Third Bridge, I thought I knew the face of the shape of things to come. The Third Bridge is to Yamato as being an Ensign in a red shirt is to Star Trek: TOS. Despite the ill portent, Okita destroys Domel’s fleet. The Gamilan commander is left with no choice but to detach the command section of his dreadnaught and grapple it on to the Yamato’s third bridge. With plans to detonate the remainder of his command, Domel hails the Yamato and offers his praise to Captain Okita. Though Okita attempts to convince the Domel to stand down, he refuses out of respect for the memories of his fallen soldiers.

The poignancy of Domel’s sacrifice is almost enough to distract a viewer from the Gamilan bridge officers meeting death with a modified Nazi salute. Still, when Domel pushes the button, ushering in a silent explosion in space, I thought it was the end of Sanada and countless other redshirts. Dare I say, it would have made perfect sense for Sanada to die in this episode.

Instead the Yamato sailed out of the nebula, third bridge intact. It turns out that Sanada fixed the wave motion shield just in time to insulate the ship against Domel’s suicide.

Seriously. Why? How many times is Sanada going to dodge the bullet? If the writers are going to go out of their way to make the deaths of no-name characters feel meaningful, why not pull the trigger on one of the senior officers?

Glaring as this shortcoming may be, the episode still gets the job done. It is a vast improvement on the series’ consistent reticence to make the good guys bleed. Imperfect as it may be, I’ll call this one a win.

Hoshina getting shot propels Yurisha to abandon Misaki’s body and emerge from the automatic navigation room; therein even Kodai mistakes her for Yuki. I wonder if the series will offer a real explanation on why these characters have such a similar appearance.

Sanada springs Niimi from the brig to help him fix the Yamato when the Gamilans plug the barrel of the wave motion gun with an explosive drill. Are her past sins forgiven?