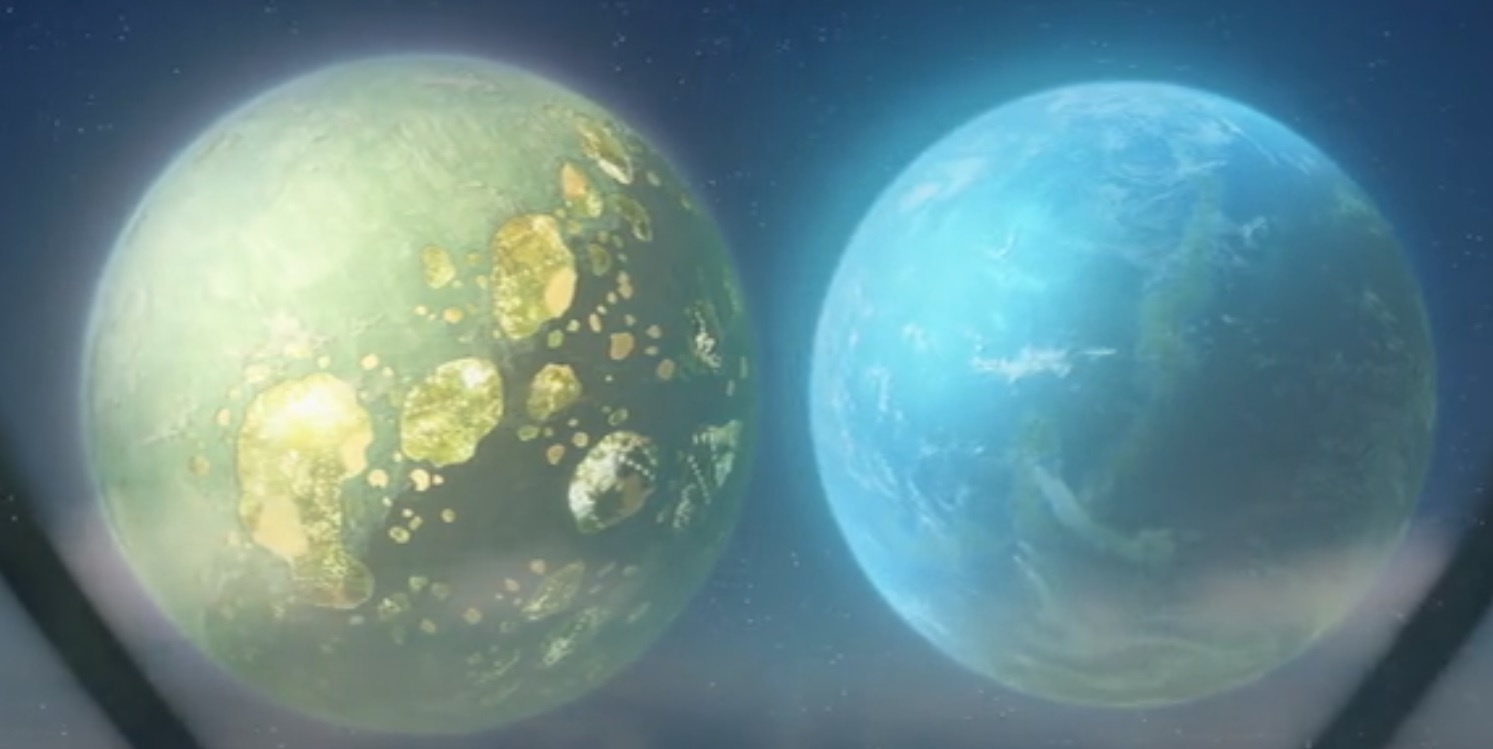 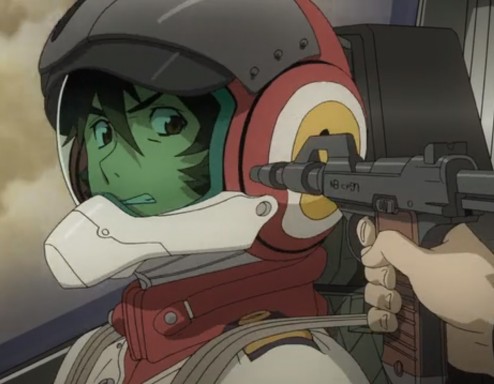 Once again, Space Battleship Yamato 2199 proves that the Gamilan side of the war can be incredibly compelling. Episode 21, Prison Planet 17, sees the Yamato licking its wounds after the battle with Domel’s fleet while Kodai and Yurisha get wrapped up in a riot on Prison Planet 17 amid an attempt to rescue Yuki from the Gamilans.

One of my on-going gripes about this series is that it lacks any sense of consequence following a battle. This episode opens with a slow pan across the length of the Yamato. Thereupon we see a ship that looks like little more than a hulk in space. A subsequent funeral scene shows dozens of Yamato crewmen, and the Zaltzi strike team, in coffins awaiting a burial in space. It’s nothing special for a space opera to honour the dead, but in this case it’s a clear indicator that the stakes have gone up. Though, perhaps not as much as we might think as it turns out that security officer Hoshina is still alive.

Niimi, now restored to active duty, points out that the ship is in dire need of raw materials for repairs. Suspecting that a nearby planet is of as much interest to the Gamilans as it is to the Yamato, Captain Okita sends Kodai on a recon mission. Unbenounced to the Terrans, this world houses a Gamilan gulag, and as fortune would have it, Yuki is on her way there for a brief layover before being sent to Gamilas itself.

Unfolding within the walls of the prison, the balance of the episode pretty much confirms every theory I have had about a looming Gamilan civil war. Before either Yuki or Kodai land on the planet, we see Admiral Ditz sitting in a prison cell. Perhaps I wasn’t paying attention, but when did Admiral Ditz get sent to the gulag? You think I would remember something like that happening. Nevertheless, it’s clear he won’t be staying for long when his prison issue meal contains a pistol.

With the blue-skinned Gamilan warden using captive Gatlantian soldiers for live-fire target practice, it’s easy to see why they would riot when given the opportunity. Less clear is Ditz’s motivation for getting wrapped up in the chaos. Melda Ditz, the same Melda Ditz who was a guest on board the Yamato some episodes back, arrives at the prison for an imperial inspection. Except her inspection is just a guise to spring her father and up end the warden’s rule on the planet. Yet the sight of Melda and her father’s blue skinned revolutionaries standing shoulder to shoulder with the newly liberated Gatlantians gave me some pause for consideration. Actually, pause for consideration is too much of an understatement; I wanted to know what the hell was going on.

There’s absolutely no attempt to account for why the Ditz family is tied up in this insurrection. Melda’s time aboard the Yamato offered every indication her being a loyal solider. While we have seen a few scenes of political dissidents and army officers being rounded up by the Gamilan Secret Police, we haven’t had a single shred of narrative – save for this episode – to suggest that there’s an organized resistance capable of acting against the imperial regime. It’s a fascinating divergence from the 70s source material and certainly something that will become more relevant as the Yamato nears Iscandar. It’s also deliciously infuriating for now simply because I want to know precisely what is going on. Considering Kodai’s ship crashed on the prison planet, effectively stranding him and Yurisha, I expect we won’t have to wait long for some answers.

Overall, this is a great episode. It addresses SBY‘s past tendency to glaze over the consequences of war while adding another, surprisingly good, layer of depth to the alien nemesis. If Yamato can keep up writing like this for the remaining five episodes, I’ll be inclined to absolve it of a great many of its past sins.

– Yurisha reveals to Kodai that Iscandar is Gamilas’ twin planet. A Kodai freakout occurs on schedule.

– Lt. Ito survives the Yamato getting hulled in the battle with Domel. He and his clumsy sidekick crash the Seagull on the prison planet after shooting out the main controls. His inclusion in the episode seemed tedious right up until the point where he saves Yurisha’s life, thinking her to be Yuki, who he already suspects to be an Iscandarian, and in turn gets shot in the back. With his dying breath, Ito asks Yurisha to lead the Yamato to Iscandar so they can save Earth. Since Yurisha’s mission is to observe humanity before Starsha renders judgement upon us, I expect Ito will prove to be a key reason why Starsha consents to saving the Earth.

– Dr. Sato and his nurse attend the zero-g funeral on the deck of the Yamato. The gravitas of the scene might have been better maintained were it not for the nurse’s heaving space boobs.

Dear god, did I just write heaving space boobs? I bet my mother is proud of me.