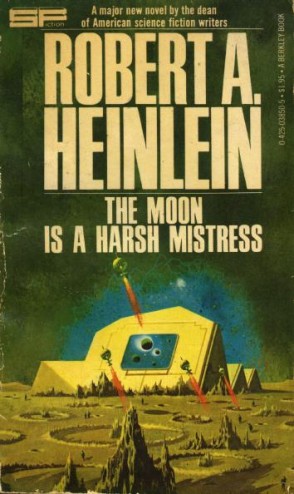 A long time ago (1996) my tenth grade English teacher (an atheist persecuting, bible thumping, religious crank) told me that, “nobody important writes science fiction and neither should I.” This statement did not have the intended effect of making me “get over” my infatuation with science fiction. Instead, it drove me to the local library. Within the stacks of the science fiction section – a place I knew well – I began pondering ways to spite my English teacher. I would find a science fiction novel that took his precious religion and used it against him. Two hours later, I was riding the bus home with a copy of Stranger in a Strange Land.

Thus did my desire to write SF run headlong into the worst role model a teenager interested in writing could hope for: Robert A. Heinlein. For a very long time I thought Heinlein could do no wrong. Through dumb luck, I managed to stay away from his weirder novels, which I think even teenage Adam would have eschewed. Instead, I reveled in Stranger, Friday, The Moon is a Harsh Mistress, Farnham’s Freehold, Starship Troopers, and a handful of his alternate history novels.

Those novels ruined me as a young writer.

Of all the twentieth century SF writers I could have picked, why couldn’t I have stumbled on to Asimov, Clarke, LeGuin, Gibson, or even Card – that is to say, Card before he turned into outwardly miserable human being. At least I was spared Lovecraft until my third year of university. But I digress. Returning to the question at hand, why was Robert Heinlein a terrible literary role model? First and foremost, Heinlein successfully convinced me that fiction is an ideal medium for a heavy handed political treatises.

There’s no reason why a SF novel can’t be political – in fact I’m reading a truly splendid collection of politically themed science fiction right now – but Heinlein often pushed his politics at the expense of telling a good story. Starship Troopers is the best example of this, but I’m going to pick on Stranger in a Strange Land to illustrate my point.

Would it surprise you to know that I don’t recall how Stranger ends? There’s something about Valentine Michael Smith joining a circus, I think. Otherwise, I have no idea how that book wraps up, despite having read it cover to cover on three occasions. What I do remember is Jubal Harshaw’s rights-minded diatribe when the Federation’s special forces kicked down the door to his house. I recall Harshaw blathering on about the political etiquette Earth should extend to Michael as a Martian ambassador. I remember Harshaw had three serving wenches for some reason. This is to say my memories of the novel are filler material, political vitriol, and anti-religious rhetoric.

The same holds true for Friday. I have only the faintest ideas of how that novel actually ends. It’s something about Friday going on an interstellar starship for some reason. Also, her father/handler/boss tells her that she’s a real girl after all. Now ask me about all republics of Balkanized America or the economic demands that a variety of political parties make during a blitzkrieg of terror attacks. It’s all politics and no plot.

Then there’s Jubal Harshaw. Long before I knew what a “mary sue” was, I knew there had to be a reason why Jubal Harshaw was peppered throughout Heinlein’s canon. Even in the books absent Harshaw, there was always the Harshaw-like character e.g. Professor Bernardo de la Paz, Friday’s “father”, or Lazarus Long. They were the sage-like father figures whose command of inductive logic inevitably illustrated why libertarianism is the best of all political systems. Naturally, I looked at these characters, who spoke with such a strong voice that it could only be the words of the author himself, and thought this was an ideal way to write.

Heinlein writes himself into his novels

Therefore I should write myself into my stories and I will win awards like Heinlein.

Lest I forget to mention Heinlein’s approach to religion (and pretty much every other form of social/political consciousness), the very thing that made me seek him out all those years ago. One need only read the Revolt in 2100 stories to see that Heinlein’s relationship with religion was almost certainly pathological. True to form, he approached the dreaded American theocracy with all the pro-libertarian subtlety of figuratively kicking over the apple cart.

Thinking about it now reminds me of another writer who I admired just enough to try and emulate – with horrifying consequences – the late Christopher Hitchens. Certainly a writer with pages of publication credits can get away with being an iconoclast. But for a rookie, namely me, to presume to model himself after such elder statesmen of the writing world is a terrible mistake. Had I a time machine, I would have given younger Adam a copy of Asimov’s and Silverberg’s Nightfall, and said, “here, learn to write like these two. Only after you win your first Hugo can you turn into a giant prick that pisses people off without consequence.”

On the positive side, Heinlein fueled the political consciousness and nascent outrage of a naive kid from the suburbs whose father often evangelized – much to my chagrin – about the virtues of the Canadian Reform party. He also cut through the gender and social norms that a childhood’s worth of juvenilia attempted to entrench in my brain. Yet looking back on who I used to be as a writer and the work I am producing now, I don’t think Heinlein taught me a single thing about being a good writer or a diligent consumer/critic of science fiction. In point of fact, I don’t think Heinlein’s books offer anything, to anybody, on the question of being a good writer. Heinlein broke almost every rule/guideline for writing and had enough talent to get away with it. It’s makes for great reading, but it’s methodological suicide.

Though I’ll always have a fondness for some of his books (nothing that involves underage incest or parallel universes crashing together in a meta-textual horror show) there is a world of writers, past and present, who are better teachers and objects for emulation.