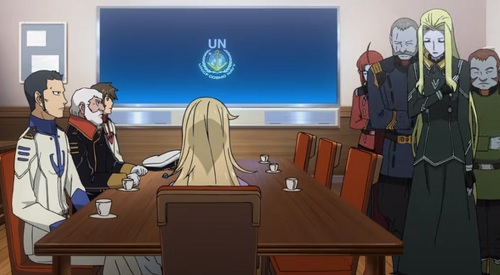 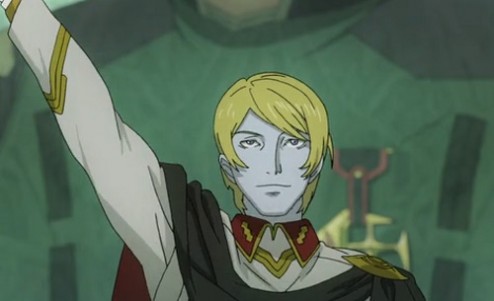 After multi-episode battles, race wars, and prison riots, the twenty-second episode of Space Battleship Yamato 2199 offers a much needed pause so that the audience might catch up on the nuances of the war. Though, once again, the episode’s primary focus is on Gamilas, it devotes just enough time to the Yamato to set up the final conflict between humanity and the Gamilans.

The use of the Captain’s Log trope to introduce the episode is something of a cheap expository device, but I dare say it is necessary to spell out a few things that the series previously glossed over. Specifically, Admiral Ditz is indeed in charge of an insurrection against Desler. I will admit that his mission to liberate Gamilan prison planets seems like an odd way to sow dissent. Ditz’s quest will certainly yield loyal soldiers, but without a fleet of ships behind him, his actions seem largely symbolic. Then again, Ditz was supreme commander of the Gamilan fleet; thus he was ideally placed to fill the fleet with supporters who could execute simultaneous Red October style coups on his order.

The episode also spends some time further defining the relationship between Gamilas and Iscandar. Through Ditz, the audience learns that Iscandar is not simply an item of political desire for Gamilas, but an object of worship. Blue and white skinned Gamilans, alike, scrape and bow before the very mention of Iscandar. Desler’s plan to exploit this reverence sees him passing off a captured Yuki as Yurisha – the Third Princess of Iscandar. With Yuki at his side, Desler announces to his people that Yurisha has agreed to a union between the two sister planets. The gambit is not entirely surprising given the way in which the series’ iconography has framed the Gamilas/Iscandar relationship as one of 1930s Germany and Austria. However, the writing does take the “we are one people” conceit a step farther; Desler announces to all of Gamilas that Iscandarians and Gamilans were once a single species, which at some point in the distant past was bifurcated into the current binary.

Despite this return to the simplistic framing of Gamilans as Space Nazis, with Desler on a personal mission to bring civilization to the barbarian species of the cosmos, I still find myself intrigued with the Gamilan side of the story. Desler, is far more ambiguous than the series first let on. He’s certainly a tyrant, but is he a tyrant with good reason? Are there worse things than the Gamilan Empire?

It’s also worthwhile to ask how complicit Desler is in the persecution of his own people? It often seems like the Imperial Guard is to blame for the crimes against Gamilan civilians. Despite the aural similarity, to Japanese ears at least, between Albet Desler and Adolf Hitler, could the character be a closer analogue to Emperor Hirohito? Are his actions beholden unto the Gamilan military junta, rendering him little more than a ideological figure head? Or is he complicit in the atrocities of the empire? Let’s not forget that we’ve seen the Gamilan fleet bombarding a rebel planet into extinction. Are Desler’s finger prints on those actions?

The episode ends with Desler ordering the firing of what appears to be a wave motion weapon at the Yamato after it warps into the Gamilas/Iscandar solar system. I suppose the final four episodes will offer up a verdict on Desler and his government.

The prevalence of saluting in this episode makes me wonder what happened to the old cross chest Terran Space Navy salute? Perhaps the writers thought it necessary to balance the Gamilan “heil five” with something more definitively Terran.

A girl-talk session with Yurisha, Ens. Yamamoto, and Melda Ditz sort of passes the Bechtel Test. They aren’t explicitly talking about men, but the topic of conversation hovers around non-gendered relationships before shifting to ice cream and star fighters.

Kodai rejects a plan from Lt. Nambu to rescue Yuki from Gamilas and hates himself for the decision. Both he and Okita are resolute that the Yamato’s mission is to Iscandar, not Gamilas. Presumably Nambu’s plan involved using the wave motion gun.