Community’s fifth season has been an about face to the televised impressionism of the series’ second and third seasons. That is to say, unlike the fourth season, which could have been helmed by any appendage of the Hollywood institution, season five shows us the hand of the artist, Dan Harmon, in almost every scene. Thus, when I watched Bondage and Beta Male Sexuality my first reaction was that Harmon must be writing his way through feelings about Donald Glover leaving the show. One need only look at the brilliant camera work that captures Abed Nadir’s essential loneliness as he Robocop Kickpuncher-walks his way down the empty corridors of Greendale Community College to see this. Yet such an interpretation seemed too easy. Perhaps the gas leak season would resort to such an obvious tactic, but Harmon’s style is almost always more complicated than that.

Puzzling through the issue put me in mind of Harmon’s writing process. This, for example, is Harmon’s story circle. 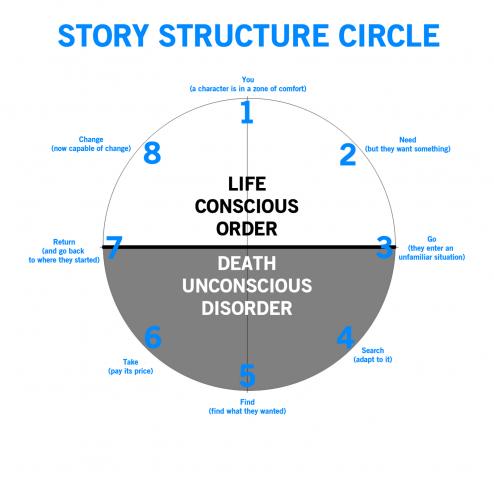 With that in mind, I began to look for the episode’s common thread. What do all the characters want? In terms of Britta, Abed, Buzz, they want what they have always wanted: to be the person of stature that they imagine themselves to be. The episode then presents these three characters with the kryptonite of all those who aspire to greatness: confirmed mediocrity.

Consider that Britta has always wanted to make the world a better place. Through “selling out,” Britta’s old friends have done just that. Britta, however, is a bartender and perpetual college student. What good can she accomplish in that? Indeed, what does that say about her potential to ever do anything measurably good?

Abed learnt everything there is to know about popular culture as a means of compensating for his Asperger Syndrome. Though he uses media to connect with people, his ultimate goal is to produce something of his own that will let people connect with him. Except his work is soulless and bereft of humanity. Abed can’t even come up with a character name that is endearing. Remember Hector the Well Endowed?

Through his creation of Jim the Duck, Buzz wants to be more than a failed cop-turned teacher at a third rate school. He wants the world to see how frustrated he is with the way the mundanities of life can grind a person down; hence we witness Jim the Duck’s perpetual catch phrase, “What the hell?” What a shame Buzz’s work is crude, shallow, and dependent upon a single gimmick.

Despite their lofty goals, all three of these characters run face first into the revelation that they are nothing more than average. Is there a more terrifying revelation for a person who defines themselves as a certain thing, either publically or privately, than to be told that they are mediocre at said thing? As Britta, Abed, and Buzz face this uncomfortable truth so too do their story arcs descend into the chaos side of the wheel.

Their return to the light side sees the episode revisiting the series’ most common and also most heartening motif: the study group/save Greendale committee – and by extension the audience – is better together than they/we are on our own. Duncan, a perpetual joke of a therapist, encourages Britta to deal with her existential crisis on her own, thus shattering her cycle of  perpetual codependence, which often prevents the character from accomplishing anything for herself. Meanwhile, Abed and Buzz find writing partners in each other, such that they might rise out of their mutually exclusive creative mediocrity.

Perhaps that’s why this episode seemed so out of place with the rest of the season to date. Everything else so far, especially the sublime Basic Intergluteal Numismatics, overflowed with confidence. Invoking Futurama’s Bender, Community and Dan Harmon proudly proclaimed, “We’re back, baby.” Yet this episode turned its eye inward and used a cheap shot against the new RoboCop movie, literally spooging over the work of others i.e. Paul Verhoeven’s Robocop, to touch upon the first fear of lofty goals. Namely, that a person’s best individual effort might only amount to being average in the eyes of the world. Who is that person then? Who is the writer that spends 10,000 hours at practice only to be esteemed as passable? Who is the revolutionary that can’t inspire grass roots social change? Who is the everyman that tries and fails at being unique?

Thankfully, the moral of this episode doesn’t demand an answer to that question. Instead, it reaffirms the series’ core message that an individual as an island unto themselves will never be capable of reaching the heights of those who are part of something larger. From the nascent relationship between Buzz and Abed to the reaffirmed friendship between Jeff and Duncan (which was largely an attempt to find a new foil, comedic or otherwise, for Jeff now that Pierce is dead), this episode tells us that nobody gets to the top on their own. For that message, Bondage and Beta Male Sexuality demonstrates that Community, despite re-piloting, is still concerned with the same themes as it was five years ago. This won’t be the best episode of the season, but it still rings true as classic Harmon, nonetheless.