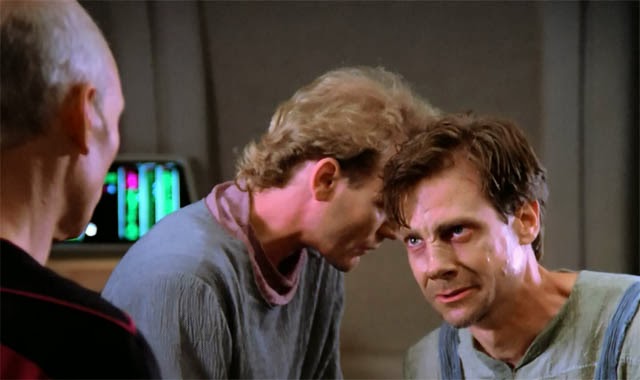 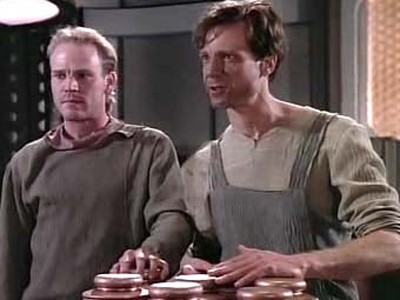 Hi everybody. I apologize for last week’s unexpected blog vacation. My partner and I had a dear pet cat die suddenly on the Sunday before last, and I thought it best to not write my way through the loss. Given how my disposition ranged from grim, at worst, to distracted, at best, last week, I probably would have ended up writing nothing but angry crap, anyway.

That brings me to today’s post, which wouldn’t have happened as you’re reading it now were it not for the fact that part of my apartment flooded yesterday. Also, I’m not sure what god(s) I’ve managed to piss off, but I’m willing to make an act of contrition.

Before embarking upon a day of working from home/monitoring apartment repairs, I watched a full episode of Star Trek TNG. Anyone who follows me on twitter knows that I usually manage to catch half an episode before leaving for work, which affords just enough material for my #MorningTNG tweet. Today’s episode, Symbiosis, is something of a head scratcher in that I can’t tell if it’s a generally poor episode, or if the episode, written by Robert Lewin, is made terrible through its laughable attempt to latch on to the “Winner’s Don’t Use Drugs” phenomenon of the late 1980s.

Overall, the episode is desperate to mobilize the Prime Directive as an entry into a morality play whereupon Dr. Crusher realizes the “medicine” that planet Herp is selling to planet Derp is actually the finest smack that the 24th century has to offer. Crusher demands that Picard take actions to end this exploitative relationship i.e. deny the drugs to the Ornarans, out the Brekkians as drug pushers, and offer humanitarian aid to ease the withdrawal symptoms plaguing the entire Ornaran homeworld. Instead, Picard falls back on the lazy, and dare I say cowardly, narrative of non-interference. The Captain’s thoughtless adherence to the letter of the law catalyzes a series of events that will throw one planet’s economy into absolute turmoil and probably condemn millions to die from withdrawal on another. Behold, Federation mercy at its finest.

In and of itself, this conflict isn’t half bad. Except for the fact that the episode ends where the real story begins. The only substance comes from Beverly lecturing Picard on medical ethics and the Captain doing only slightly more than nothing to resolve his moral quandary. Do we know what’s more interesting than nothing? Anything.

It’s a perfect Kobayashi Maru, and Picard’s reaction to the situation is to invoke Wargames and do nothing.

Meanwhile, the episode sees fit to waste a few minutes of the audience’s life, framing young Wesley Crusher as the innocent boy from the future who doesn’t understand the appeal of drugs. Tasha, who grew up in Star Trek’s equivalent of Darfur, turns the episode into an after-school special, with young Wesley affirming that he just doesn’t understand why someone would want to get high, and Tasha hoping that he never will. I don’t think there’s a moment in the history of Star Trek that I’ve taken less seriously than that moment. Even this one…

If the above wasn’t bad enough, there are also a few episode breaking technicalities in play. As he so often does, even in season one, Picard has something of a relationship of convenience with the Prime Directive. Recall that he should have let the planet of sexy, oil-massaged, well-tanned, space hedonists execute Wesley for disrupting a flower bed. Instead, he literally offered up a soliloquy as Deus ex Machina before beaming up to the Enterprise and sailing off into the sunset. Now that the son of his future ex-wife isn’t on the chopping block, the Prime Directive returns to being an absolute. How very convenient.

Of greater interest is the fact that if Picard is truly keen on upholding the Prime Directive in Symbiosis, he never should have answered the distress call which prompts this entire episode. Even though the Ornarans are capable of space flight, their civilization has fallen into decline such that they can’t maintain their small fleet of interplanetary freighters. Data illustrates this point when he informs the bridge crew of how the Federation’s previous contact with this particular solar system reported the two planets to be in the early stages of space flight. Thus, the balance of probabilities suggests this is a pre-warp civilization, and Picard violated the Prime Directive the moment he rescued the Ornarans, Brekkians, and their cargo of space smack. That may not justify an “in for a penny, in for a pound” mentality wherein the Enterprise further meddles with these primitive people, but it’s hard to imagine Dr. Crusher not making this argument to Picard.

I’ll give the first season of TNG a pass when it comes to poor costume design, uneven acting, and a tendency to rehash the better stories of TOS without adding anything new to them, but even as an artefact of the 1980s war on drugs, Symbiosis is a terrible offering.