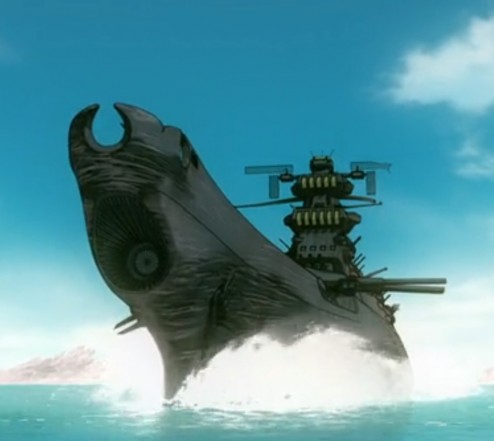 Surprisingly enough, there’s not a lot to say about the third to last episode of Space Battleship Yamato 2199: The Faraway Promised Land. After a voyage of 160,000 light years, the Yamato arrives on Iscandar, and it turns out that Princess Starsha, Earth’s guardian angel, is a bit curmudgeon.

Despite surviving the depths of space and the brutality of Dessler’s armadas, Starsha doesn’t want to give the Cosmo Reverser, the key to Earth’s salvation, to the Yamato’s crew. Even with Yurisha begging her sister to save humanity, and Admiral Ditz – defacto leader of the Great Gamilas Empire in the wake of a supposedly dead Dessler – announcing the end of hostilities with Earth due to Captain Okita’s decision to save the Gamilan homeworld from Dessler’s madness, Starsha still needs to think about if humanity is worth saving.

Seriously, Starsha? What’s your damage? In a word: guilt.

The Iscandarians, as we know from the original series, are an almost extinct people. But instead of being an enigmatic, but generic, counterpoint to Gamilas’ brutality, this episode shows us that Iscandar’s pacifism is the result of a history of brutal imperialism. Starsha reveals that her people once weaponized wave motion energy and used it to forge an interstellar empire. So we have a bit of a nuclear allegory on our hands here; this is to be expected from Space Battleship Yamato, but it’s telling to see said nuclear guilt coming from Iscandar and not humanity.

Starsha’s guilt turns the Cosmo Navy, and the Earth, into the ultimate good guy, excusing all previous actions on the part of the Yamato. Though it’s obvious that Starsha sees something of Iscandar’s violent past in humanity, recent actions from the Yamato prove that humans are, despite our flaws, far better than Iscandarians as a people. I mean, we don’t go around using wave motion energy to blow up planets unless we absolutely have to.

If that wasn’t enough guilt, this episode also reveals that Starsha is partly responsible for Dessler building the Great Gamilas Empire. During a flashback we see a young Dessler speaking on his desire to unite Iscandar and Gamilas. Starsha refuses on the grounds that their planets’ philosophies are too far apart to ever facilitate a unification. Post-empire Iscandar wants to bring salvation and enlightenment to all sentient races. Dessler then perverts that vision into a justification for building his empire. He will bring salvation and peace at the end of a gun. Therefore, all of the suffering the Gamilans inflected upon the Milky Way and the Magellanic Clouds are partly Starsha’s fault.

Between species guilt, personal guilt, and the acute pain of watching Mamoru Kodai die in her arms after the Gamilan prison ship carrying him crashed on Iscandar – so much for the love story between the elder Kodai and Starsha – Starsha’s decision to help humanity seems to have less to do with the Yamato’s actions, and more to do with her own guilty conscience.

And that’s really all there is to this part of the story. It is a lot of watching the Yamato’s crew wait while Starsha wrings her hands and backfills on the Iscandarian side of the story. It’s not a bad episode per-se, but it is another “pause” episode following an “all out action” episode. With two more episodes to go, I think it’s clear that the moral of this story is not “the guilt of the reluctant hero,” but simply that humans are better than aliens. Of course, the more interesting question emerging out of that motif is should we read a national allegory into this message?

– I would wager a thousand dollars that Dessler isn’t really dead.

– Is anybody going to explain how Admiral Ditz managed to insinuate himself as the defacto leader of the Gamilan Empire, or are we just going to have to roll with that one?

– Does anybody else think that Mamoru Kodai’s soul went into the Cosmo Reverser?