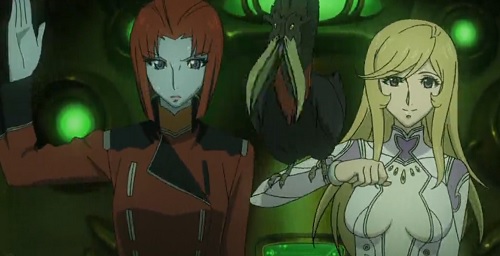 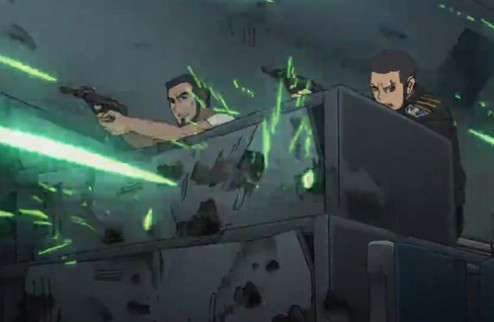 The second to last episode of Space Battleship Yamato 2199 is, overall, a good episode. Albeit, if the episode was intent on surprising us with its plot developments, then the writers really need to get a better handle on how to effectively foreshadow. I don’t think this is the first time I have said that, either. Instead, it’s best to look at this chapter as an interesting window into some of the series’ broader subtexts.

We open with yet another of Crewman Misaki’s radio broadcasts/info dumps. Therein, we learn that the Yamato is two months out from Iscandar and on approach to the Milky Way warp gate at Balun. The ceasefire with the Gamilans has allowed the Yamato’s crew some time to reflect on their mission and grieve for their lost comrades. Of course, nobody should be surprised when the moment of somber reflection turns into an all out shit storm for the Yamato. Because – big surprise here – Dessler isn’t dead. I’m sure this news shocks absolutely nobody, assuming you’ve been watching the show or reading these reviews.

While the Yamato was making its way back to Earth, Dessler was assembling a fleet of loyalists, seemingly under the command of General Goer.  Rather than plunge his empire into civil war (i.e. the thing you would expect from a deposed emperor), Dessler’s plan for his three thousand ships is little more than revenge against the Yamato and Captain Okita. Somehow, he thinks that defeating a lone Terran ship is going to help him score points with Starsha – who he admits to being his one true love – and thus bring order and stability to the universe. I suppose we’re meant to believe this lone act will undermine the fact that Admiral Ditz seems to have the empire, and the bulk of its military, under his control.

This poses an interesting question in terms of the series’ broad allegory. If Dessler=Hitler and Gamilas=Germany what are we to make of the mad king and his now penitent empire? The original series made it easy for us; Kodai blew up the lion’s share of Gamilas before landing on Iscandar; no symbolism there at all. Now, the waters are a bit more muddy.

Be that as it may, SBY 2199 has always been very careful in framing the Gamilan military as subordinate to and separate from the political machinations of the Imperial Guard (aka the S.S.) and Dessler’s himself. We see this in Admiral Ditz, supreme commander of the Gamilan fleet, liberating the Gamilans imprisoned under Dessler’s regime. Similarly, in the aftermath of the battle of Baleras, it was General Hiss who declared that Gamilas had no more feud with Earth. Perhaps what we are looking at here is a story that is not drawing a line between space nazis and space terrorists, as I originally suspected, but mobilizing the old anime trope of “the good soldier” as an attempt to look at Germany without the post-war revisionism that underwrote the original series.

We see the good soldier personified in the likes of Domel, Ditz, Okita, Kodai. They don’t revel in blood lust, but they won’t hesitate to do their duty when called upon. They’ve also done terrible things in the course of that duty. However, when we compare them to the likes of Goer and Gimleh, who revel in destruction – the latter of the two exterminating an entire planet that dared to rise up in rebellion against the empire – they become relatable figures, neither good nor evil, residing instead in the moral grey area reserved for soldiers who genuinely believe they are doing the right thing.

All of this leads to me say, once again, that the Gamilan side of this story is probably the best part of the series. Forget about Earth, if there’s a second season of SBY 2199, I want it to be told from the perspective of the Gamilans trying to find a new path in the absence Dessler’s toxic influence over the empire. Consider that we see Melda Ditz and Princess Yurisha standing shoulder to shoulder on Gamilas. Does this suggest that there might be room for a proper reunion between Iscandar and Gamilas? Admiral Ditz released both Gamilan and Gatlantian prisoners on his tour of the empire’s penal colonies, what impact will that have on shaping a peace between the White Comet Empire and Gamilas?

Even with Dessler’s apparent death (again…) at the end of this episode, everything on the Gamilan side of the story is left in such an open-ended state that the audience can’t help but want more. The only thing that could ruin it would be a throw away epilogue in the final episode. Something that in thirty seconds of exposition says, “Earth, Gamilas, and Iscandar learned to live in peace and formed the United Federation of Planets. Everybody go home.”

Notwithstanding such a cheap wrap-up, all that’s left for this series is the crying, literally. During Dessler’s last, desperate bid to capture the Yamato, Yuki is seemingly shot and killed. The episode ends with another, now famous, Kodai scream. Setting aside the fact that Dessler’s attack killed dozens of red-shirts, I’m still not sold on the idea of Yuki being dead. First, death doesn’t seem to be a problem with named characters, especially if your name is Dessler or Sanada. There’s also the fact that Starsha got really enigmatic about how the Cosmo Cleaner would restore the Earth. I suspect there will be some sort of relationship between the amnesiac Yuki and the Iscandarian McGuffin.

One episode to go, then this wacky experiment comes to an end.