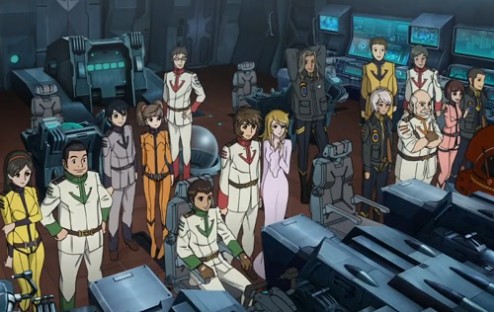 Here we are at the end of SBY 2199. As much as I’ve picked on the series from time to time, I can honestly say that I don’t want it to be over. The series is uneven and confounding at times, but overall, it’s the kind of space opera that has been missing from North American television for quite some time.

This, the final chapter, is rooted in humanity. There’s not a Gamilan or Iscandarian to be found in the entire episode; though the former is grounds for a little disappointment since the writers left the empire in such a fantastic state of disarray. Instead, good old fashioned human emotion brings this particular story to a close.

In another classic Yamato misdirect, Yuki isn’t dead. Rather she’s in a coma with a 0.1% chance to recover. Moreover, Captain Juzo Okita, the man who led the Yamato from Earth to Iscandar and back again, is on death’s doorstep. With Sanada’s attentions focused on researching the Cosmo Reverser, the burden of leadership falls squarely on Kodai’s shoulders. And in that shift, the episode’s emotional impact really starts to hit home.

So much of this epilogue is spent on illustrating how the final year of the Earth-Gamilas war has worn Kodai to the point of mental and physical exhaustion. When the eyes of junior officers are upon him, Kodai is the model of efficiency. The moment he’s alone, he slumps against bulkheads and struggles to keep his composure. We witness in equal measures how the war has brought out the leader in him, but also how unprepared he is for the burden of command. It’s about then that Yuki dies.

SBY 2199 loves blowing red shirts out of hull breaches. When it comes to named characters, the series constantly stops short of killing off anybody we will miss. What a shame that this episode proved to be the rule, rather than the exception. Yuki’s death lasts just long enough to give us a full-on Kodai meltdown, and to serve as an emotional counter point to the out-of-nowhere wedding between a pilot and a nurse. Apparently, Kato and Harada had a romantic subplot.

Ultimately, it’s the McGuffin of the Cosmo Reverser that brings Yuki back to life. In order to function, the Cosmo Reverser needs to be inhabited by the memory of a person who remembers the Earth before the war. In this case it is the memory of Kodai’s older brother, Mamoru. The “ghost” of Mamoru Kodai witnesses his younger brother holding Yuki’s cold body asking, in what can only be described as a fit of juvenile selfishness, what’s the point of saving the Earth if Yuki won’t be there to see it.

What’s the point, Kodai? What about the few hundred million people living underground on the irradiated Earth? I’m sure they would gladly accept Yuki’s sacrifice with quiet dignity.

Despite having the weight of humanity on his ghost shoulders, Mamoru Kodai decides to help his brother out. He activates the Cosmo Reverser prematurely, thus bringing Yuki back to life.

Then, through the magic of Deus ex Machina, the Cosmo Reverser manages to capture Captain Okita’s…soul…I guess…in the instant of his death. Without any intervention from Iscandar, Okita becomes the core of the Cosmo Reverser and thus saves the Earth.

In addition to saving the Earth, Captain Okita also saves the episode from becoming a farce of a happy ending. Even a cynical bastard like yours truly couldn’t help but be moved by Captain Okita’s final moments. Alone and still in his uniform, Captain Okita sees his mission through to the end and dies gazing upon the Earth. Okita’s transformation into the memory of a blue and green Earth is his final act of contrition for failing to prevent the Earth-Gamilas war during the first contact between the two species.

Ultimately, the finale of Space Battleship Yamato 2199 it is a moment of catharsis. The series has constantly seen its characters rising to the occasion as the weight of the world sat on their shoulders. Previously, any such moments of reflection existed only as a prelude to disaster. The finale finally afforded the characters, and the audience, an emotional experience that spanned a broader spectrum. Still, the fake Yuki death seems a cheap way to frame Kodai as a burgeoning leader. A final talk between Okita and Kodai could have got the job done. Instead, the writers drove the point home in a clumsy sort of way. I think the kids are calling it an “all of the feels” ending.

Meh. I’ll take the somber reflection of Okita’s final moments as my take away for the series.

Stay tuned to the Page of Reviews for my overall review of Space Battleship Yamato 2199.