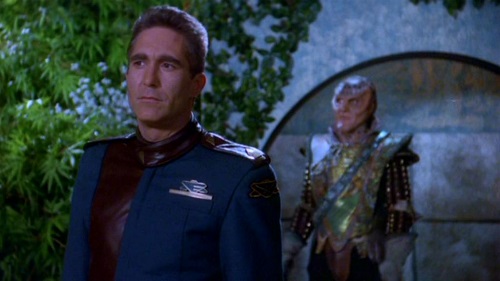 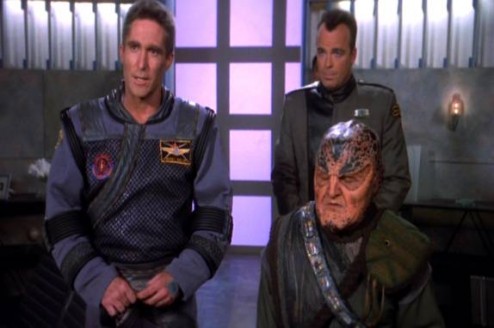 Last week I wrote this post about Babylon 5. If you missed it, I shall summarize as follows. For the longest time I thought the late Michael O’Hare was the worst part of Babylon 5’s first season. After a little bit of digging, I discovered O’Hare was working through some considerable mental health issues during his time as Commander Sinclair. Sufficed to say I felt like a douche.

In the final paragraphs of said post, I resolved to re-watch the first season of Babylon 5, as both a critic and also a person who wants to try and understand what it must have been like for Michael O’Hare to pretend to be the commander of a space station while trying to hide his condition from his employer and co-workers.

Here’s what I’ve come up with after watching the first four episodes of the series.

In the past I’ve seen O’Hare’s acting as stiff, bordering on tired. Now I think part of the challenge in watching his performance is that he’s surrounded by actors playing characters that are so much more animated than Commander Sinclair. Ambassadors Londo Mollari (Peter Jurasik) and G’Kar (Andreas Katsulas), chew the scenery to my endless delight. One of the best scenes in the first episode has Lt. Commander Ivanova (Claudia Christian) taking a strip off of Talia Winters (Andrea Thompson), the station’s resident telepath. Michael Garibaldi (Jerry Doyle), is the good cop with a shady history. Even when the writing is a bit infodumpy, all of the above actors are playing their characters to the hilt. In comparison, O’Hare and Commander Sinclar tend to fade into the background.

And then the fourth episode happens. It’s an otherwise unremarkable monster of the week story right up until the very end. Sinclair, having helped fend off the rampaging alien monster, is in his quarters having a drink when Garibaldi pays him a visit. Without any preamble Garibaldi calls out Sinclair for putting himself in danger. I’ve seen Riker do the same  to Picard, but Garibaldi takes the mother hen routine a step further. Babylon 5’s top cop all but accuses Sinclair of having a case of PTSD. He thinks Sinclair is looking for dangerous situations because it is easier to find a reason to die than it is a reason to live. What follows is a flash of burning anger from O’Hare, which then fades back into his usually neutral demeanor.

I’ve watched my Babylon 5 DVDs from start to finish at least half a dozen times, yet I’ve never caught on to this scene before.

Within the Babylon 5 universe, the Earth-Minbari war took place ten years before the events of the first season. Even though the first season explores Sinclair’s role during the war, I’ve never thought about his character as still suffering from those events. Rather, I’ve always seen the character’s emotional traumas as something very much in the past tense. Though I’m not willing to write off all of O’Hare’s stiff acting as him trying to channel the 1000 yard stare in Sinclair, I think that may be where some of it is coming from.

I could say more on this point, but I’m going to hold off until we get to the part of the first season that digs into Sinclair’s role during the Battle of the Line, the final battle of the Earth-Minbari war.

There’s one other thing I’ve noticed after re-watching the first four episodes of Babylon 5. Either by accident or design Babylon 5 goes places that Star Trek tended to avoid. The backdrop to B5’s first episode is the election of a new Earth Alliance president. Babylon 5 has a political culture. The Federation might as well be North Korea for all the political discourse we get from the crew.

Babylon 5’s second episode has secularism run headlong into spiritualism when a “Soul Hunter” arrives on the station. Only in mid-series Deep Space 9 did we see Star Trek telling stories where religion wasn’t couched in a primitive society.

Finally, there’s the fourth episode when a reporter asks Garibaldi to direct her to the bathroom. Yeah I know, I went there, but how could I not since Babylon 5 and JMS were so obviously going there for a reason.