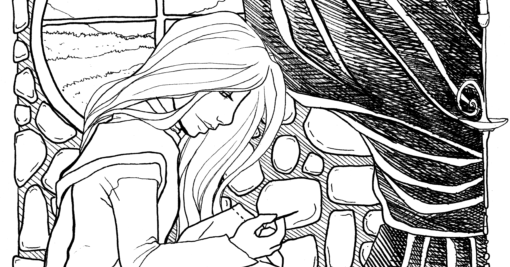 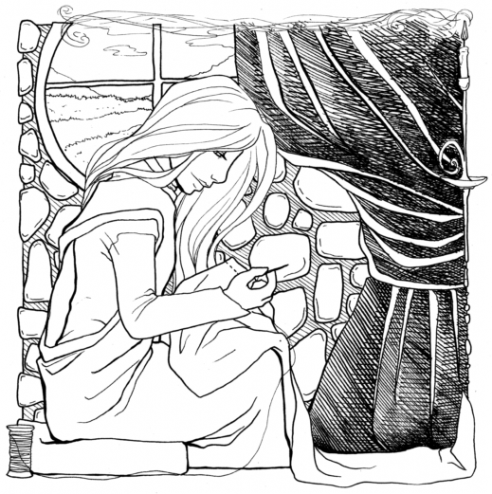 Many effervescent thanks to Adam for letting me infringe on the Page of Reviews during his holiday!  And here’s my big news: I’m doing a Kickstarter!

The Dark Lord and The Seamstress is a sweet love story told in verse about the importance of looking beyond someone’s (poorly dressed) exterior and into their heart, featuring  a little trickery, a little romance, an a little bit of sartorial fun! The finished product will be a picture book with a full colour cover, filled with beautiful black and white illustrations.

The Dark Lord, King of Hell, is tired of being the butt of all the devils’ jokes for his outdated wardrobe. When he invites the world’s most famous Seamstress to Hell to make him some new threads, he doesn’t expect to be struck by love at first sight. Now he has to figure out how to convince her to marry him and stay and Hell forever… and the Seamstress has to try to figure out how to convince him that it’s a terrible idea!

Here’s a sneak preview of both the story and the art.

Illustrator Jennifer Vendrig (icegaze.deviantart.com) and I have been trying to get this book off the ground for twelve years. In 2002, when I wrote the poem that comprises the book, Jennifer and I noodled with the idea of doing some sort of illustrated version of it. A webcomic was too involved for both of us at the time and self-publishing as we know it now hadn’t been invented yet, so we put it on hold.

A few years later I had the opportunity to offer up the poem to a poetry chap book. The publisher discussed having all the poems illustrated, and I remembered the sketches Jennifer had already conceived. Jennifer mocked up some thumbnails, but then unfortunately the publishing house collapsed and the project was cancelled.

Now that self-publishing has advanced to the realm of making picture books easier to produce, Jennifer and I decided to jump in and try to do the project ourselves. We had already done all the hard work of designing the characters and figuring out the illustrations. It was really just a matter of committing to the project and finding a book designer. Luckily, one of my friends is in the midst of a publishing course and she’s really into book designing!

So, the Kickstarter will cover printing costs, marketing, and the fees I’m paying to Jennifer and the book designer. It will also mean that instead of going even further into debt to make this project, we’ll be starting at a baseline zero, which gives me more freedom to do fun and wonderful things with the book, like library and school giveaways.

Hard as balls. I really, really did not anticipate how much and how constantly you have to flog the project. I spent a week of evenings designing and tweaking the video, the project page, the story of it all; more hours, I think, than went into editing the book itself, actually! And then I thought that all I would have to do was upload my slick page and sit back and watch the numbers climb.

Putting the budget, the video, the actual book project and the Kickstarter page up was a breeze, though, compared to trying to flog the project and build buzz.

My #1 piece of advice to people who want to run a Kickstarter is to get a mentor to guide you through all stages of the project. My #2 piece of advice is to try to get all your blog posts, interviews, media mentions, etc. in order before you even make the Kickstarter live.  That way all the hard work is done ahead of time.

I feel like I am constantly playing catch-up with myself, running all over social media trying to stay on top of the project and to get it out places. Every time my phone dings I say, “New backer email? Aaaw. No, just a new alert.”

This is stressful. Because if I don’t get 100% of my ask, I get 0% of the money. Maybe I should have gone with a different crowdfunding site, where you get to keep everything that’s pledged, but I felt Kickstarter was a better choice because it’s now a household brand name and a lot of people are already members of the site.

Man, if and when the project jumps into stretch goals, I’ll be so relieved. I don’t feel like I’ve slept since the campaign began.

… I’m pretty sure I haven’t, actually.

(And of course, I’m in the middle of novel edits for three other books right now, too. Whoo boy!)

I’ve always admired Neil Gaiman for the kind of career he has. He lets the story dictate the medium, and I’ve always tried to do that. I’ve written feature films, and television, comics, poems, short stories, novels, etc, just whatever the story best fits. This poem came from the confluence of working in a children’s library and reading a lot of Byron in my off time. It was begging for beautiful ink illustrations, Gorey- or Burton-style.

And the tale, because it’s set in Hell, isn’t entirely a kid’s story. It’s presented as a picture book, but the narrative is a bit more mature than is normally seen in picture books. It’s more like a picture book for adults.

Also, the theme of the book does fall right in line with those of my other works, I think. I’m generally interested in revisionist storytelling, which are tales that take classic and familiar tropes and turn them on their head or revisit the same story from a different perspective. I also like to tell stories about the liminal space between “good” and “evil”, and stories that play within the gray spaces of fairy tale and reality. I like stories that make people think about all the different ways people can love one another, and accidentally hurt one another, and how there’s more to attraction, fondness, sexuality, lust, and companionship than the mainstream heterosexual binary.

And I think this book tells a great message about how, even if things appear to be one thing, taking the time to listen, and learn about another person and their motivations and cultures will always reveal their own humanity and help you understand them.

And listening and understanding, and respecting other people’s differences as well as the person themselves is something we definitely could use a heck of a lot more of in this world.

So why should I donate?

Firstly, to help me offset the costs of paying my Illustrator and designer at market rates, and upfront like is proper on a project like this. Secondly, because you want a copy of the book. eBook copies are at the $25 pledge level and above, and at $50 you get an eBook copy and a paperback copy and an eBook of my short story anthology Hero Is A Four Letter Word Thirdly, because you want to see me make a total fool of myself on YouTube.

And thirdly, if y’all want a very sneaky, very first-look of my brand new novel, then I’ll be posting it chapter by chapter as more stretch goals are achieved. I’ve tagged the book #EpicFeministFantasyNovel on Twitter, so you can follow the news about it there. But I’ll only start leaking the book when we achieve $5,000.  So if you want to read it before it’s even officially announced by the publisher, back the project and bug your friends and family to donate.

Interested? You can check out the Kickstarter project page here:

Other posts I’ve done on tDLatS:

Why I Wanted To Do This Project

What Are The Kickstarter Perks?

Things I Am Learning As My Own Publisher:

About J.M. Frey: She is an Author, Actor, and Professional Geek. Author of the award-winning Triptych.