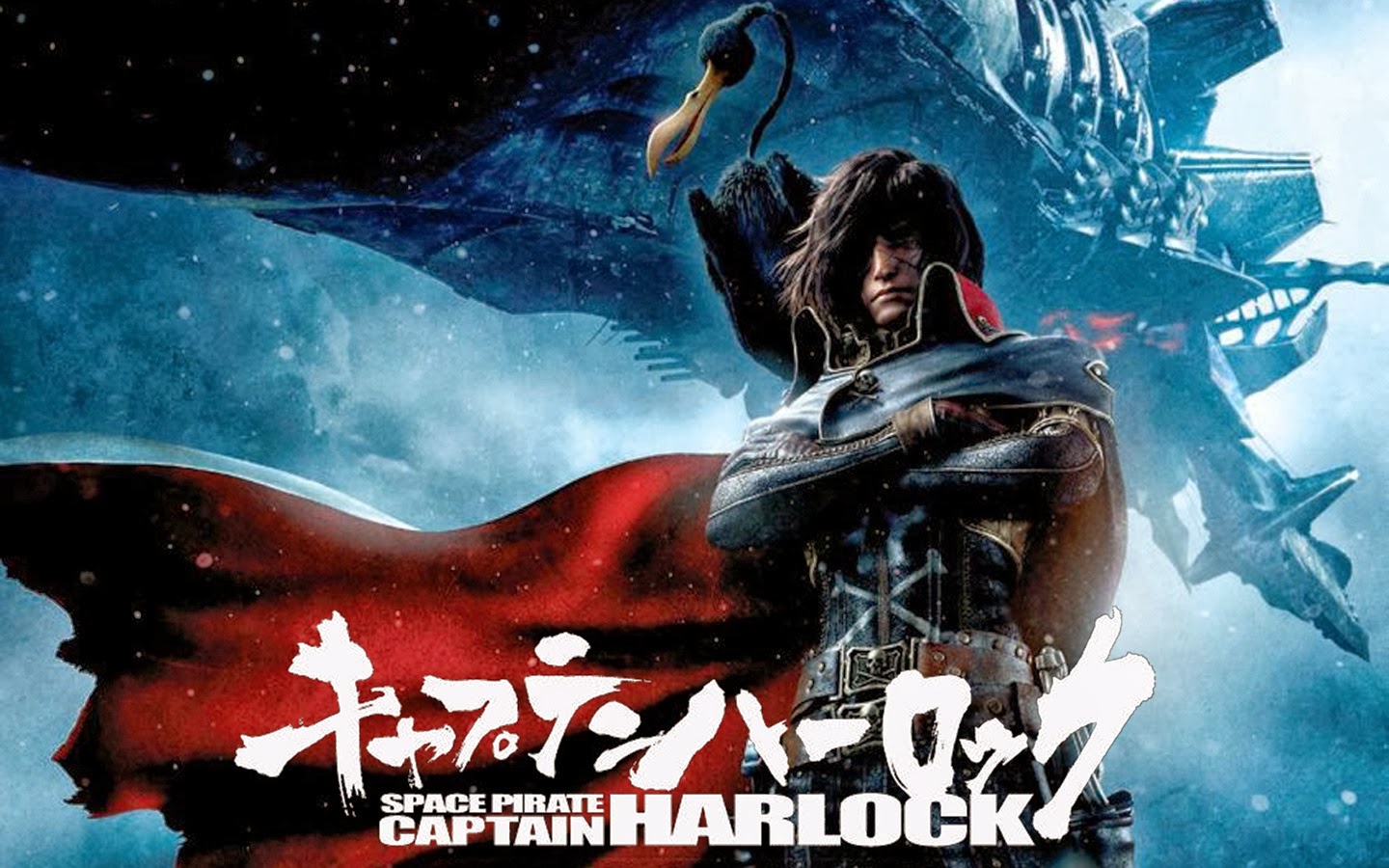 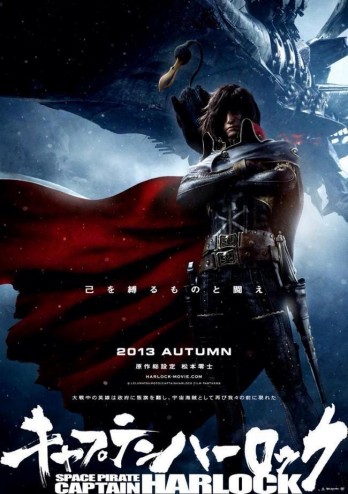 I approached 2013’s Harlock: Space Pirate as something of a neophyte in terms of the titular space pirate’s history. Beyond knowing that Harlock is a staple of Leiji Matsumoto’s anime universe, I’ve never discovered who Harlock is or what he symbolizes – other than a deus ex machina in the Galaxy Express 999 movies. Bearing this in mind, I’m sure some Harlock puritans will be horrified when I say that I generally liked what I saw in this feature film. It’s not perfect, mind you. Even with a near to two hour run time, the movie leaves me feeling like there are some plot holes that should be plugged. Be that as it may, I still liked what I saw.

Harlock, as the title suggests, is the story of a space pirate. The move is set in the far distant future where humanity has expanded across the galaxy. However, the United Federation of Planets, this is not. Despite a colonization and population boom that visited 500 billion humans upon the galaxy, space proves to be a terrible place. Planets are largely lifeless rocks, and the cosmos is all but devoid of sentient life. In short, Harlock frames space exploration as the realization of our worst existential fears: we are alone. There are no answers out there.

This rather depressing truth leads to a repatriation movement where all the colonists want to return to Earth. The arrival of billions of colonists leads to “the Homecoming War” a massive pissing contest over who has the rights to settle on terra firma. Eventually, a Romanesque and vaguely Catholic governing body called the Gaia Coalition seizes power.  In doing so, the Coalition brings the Homecoming War to an end. They declare the Earth a protected sanctuary, forever closed to humanity.

The story begins a century that event.

At this point, you might feel like I’ve wasted your time in explaining all of Harlock’s back story to you. Indeed, I also felt the movie was treading into the realm of backfilling and excessive world building. Then something interesting happened, Harlock made the backstory relevant. While I wouldn’t go so far as to call the writing non-linear, it effortlessly connects internal history with an in medias res narrative. No piece of back story is wasted. Flashbacks inform and propel character development – as they should. Scenes which might otherwise be seen as infodumps become pivotal knowledge as the script decides to yank the rug out from the viewer.

Harlock takes its two hours and does something that a great many movies – anime or otherwise – are incapable of doing: weaving place and character together into a single narrative that I, as audience and critic, can care about. I don’t know if the universe I see in Harlock is particularly respectful of established canon. I can say that I don’t care one way or another.

I won’t speak too much more on the details of the narrative or how it unfolds as so much of where this movie excels is in undermining the audience’s expectations of what is happening. For readers familiar with Matsumoto’s work, I will say that Harlock hits all the right notes. It is essentially a story about redemption and forgiveness underwritten by a clear environmental and anti-war message. The latter point isn’t to suggest that Harlock pulls its punches in terms of violence. There are some considerably dark moments in the film. Captain Harlock himself moves from Batman to Rorschach territory over the course of the story.

On a somewhat related note, I feel it’s also worth mentioning that one of Harlock’s central characters is a paraplegic. While we`re initially meant to see this character as the antagonist, his role in the story, much like Captain Harlock’s, becomes more complex than binaries of good or bad. The character is driven and wholly capable, never limited by his disability. Likewise he’s also a tremendously bitter and angry person. I’ll leave discussions on if this is a good or bad depiction of a disabled person on screen to a critic better educated on these matters. Notwithstanding that point, I know enough to say that these depictions are few and far between in Western movies, and even if the angry disabled person is a bit of a trope, at least Harlock is making an effort to be diverse.

In terms of visuals, Toei Animation out did themselves with Harlock. The hyper-realist aesthetic owes much to the likes of Final Fantasy: The Spirits Within. Unlike the former, none of the details in Harlock are washed into the background or lost in blurry movements. Each scene offers something that a person would want to capture and use for their desktop, up to and including the space battles. Normally, I’m not one to say be taken in by pew-pew lasers and starships, but I’m happy to make Harlock an exception to this rule.

The only part of Harlock that gives me some small measure of concern is the subtitles. My passing familiarity with the Japanese language via an extensive history with anime and Japanese cinema provides me with enough insight to know there are instances in Harlock when certain words don’t align with the subtitles as presented. While this is probably meaningless – speaking more to my status as someone who is far from fluent in Japanese – I suspect less than perfect subtitles might account for some perceived plot holes.

Harlock: Space Pirate gives me exactly what I want in a space adventure. The narrative is full of subtext, but anchored around a few very clear central themes. The existential horror of humanity alone in the universe facilitates a moral ambiguity to most of the characters, Harlock included. He’s neither Han Solo nor Malcolm Reynolds. In some ways Harlock is a more tortured character than either. He will likely resonate with the sort of viewer who enjoyed Christopher Nolan’s interpretation of Batman. With Western space opera in something of a doldrums – yeah, yeah, shut up about Guardians of the Galaxy, it`s just one movie – Harlock: Space Pirate is a welcome way to scratch a sci-fi itch.