Our story begins on Wednesday night. It was about quarter past eleven. The news was alternating between being boring and outright depressing, and I wanted to feel space under my feet, so to speak. I loaded up Elite Dangerous, currently in its third significant beta iteration, hungry for some adventure.

My evening began less like Buck Rogers and more like Malcolm Reynolds. A 500 credit fine I previously incurred, and subsequently forgot about, had amortized into a 750 credit fine and my being wanted within Federation space. It wasn’t the biggest bounty I’ve had against my name, but it was enough that I didn’t want to chance being bounced by a security patrol. Grumbling, I paid off the outstanding fine and took off.

With 50,000 credits in the bank and a fully kitted Eagle Mk  2 under me, I was ready to take on the galaxy. Mind you, this wasn’t the first time I found myself spoiling for a fight in Elite Dangerous. Previously, I took my Sidewinder, the game’s entry level ship, into combat thinking that I would cut my teeth as a bounty hunter. I managed to get off five shots before I had my ship shot out from under me. On another occasion I took a modestly kitted Eagle fighter to a lawless system, intent upon starting a life of crime. I managed to scratch my foe’s shields before his friends cut me to ribbons.

This time, however, it would be different. I’d fight in a small conflict zone, waiting until it was clear which side was winning, and then join in and score a few small bounties. It wouldn’t be glorious, but it would let me get a some real combat experience with something other than the game’s tutorial. One FTL jump later, I was cruising toward a known commercial hub in the Styx system. At a distance of roughly 100 light seconds from my destination, my cockpit lit up and the quiet majesty of super luminal travel was replaced with chaos and sirens.

Somebody was trying to pull me into normal space. I fought against physics to keep my ship aligned with the exit vector that would let me escape the trap. All the while, I ran the scenarios through my mind.

It might only be the local cops looking to do a customs inspection.

It might be pirates too dumb to realize that my Eagle has almost no cargo space.

Could be a psycho who likes blowing up ships.

Fuck it, I said aloud.

I released death grip on the joystick, allowing my ship to roll and pitch through the interdiction field. Emerging in normal space I throttled up and deployed my weapons. Whoever this was, unless it was the cops, would have a fight on their hands.

The ship resolved on my radar. I locked target, watching as the details appeared, the last of which told me my would-be assailant was marked for death by the local cops. I turned my fighter to face him and got my first look at his Cobra Mk. 3. Not the biggest or baddest ship in the game, but it certainly out classed my light fighter.

“Your cargo is mine,” his threat appeared in my communication screen.

“Joke’s on you, asshole, I don’t have any,” I mumbled to myself.

It was almost over before it began. His ship rolled end-over-end and he opened up on me with a battery of four pulse lasers. There was no way I could go toe to toe with this guy. Instead, I banked away, hit the afterburner, and hoped to create some distance between the two of us. During my flight he pummeled my ship with enough hits to cut through my shields, bring my hull integrity down to 25%, and reduce one of my two pulse lasers to about 50% functionality.

His ship seemed just as fast and nimble as mine, despite his increased size. We both came around for another pass at each other. I saw his lasers flare, this time jamming on my lateral thrusters to try and escape his killing arc. That’s when I noticed the thing that would save me. He might be able to roll, pitch, and thrust like my ship, but he’s too heavy to be as zippy with the lateral thrusters as I am. What followed was five minutes of the most white knuckle dog fighting I have ever experienced in a video game. I had to fly perfect. Any mistakes would put me in line of his quad lasers, and my ship would not survive another salvo.

I didn’t give him another chance.

He begged for his life, promising to leave me alone if I would spare his ship. I poured on the thrust, diverted energy to my weapons, and cut him down with one final salvo. With his shiny Cobra reduced to debris, my ship’s computer alerted me to a 2,150 credit bounty voucher that I had just earned.

Small potatoes, really. I’ve made more for less effort on a cargo run or a courier mission. Not to mention that cargo runs rarely beat my ship up in the way this clown had. Still, a battle like that isn’t about the money. In a perfect world, I would have printed out that bounty voucher and framed it to commemorate my first kill in Elite Dangerous. Hey, Frontier, give us a way to print out bounty vouchers in the release build.

Despite a few false starts – and subsequent insurance claims – I was finally on my way to living up to the game’s name. The only thing left to do was tweet about it. When I woke up the following morning, I found the second best thing to a framed bounty voucher waiting for me: a nod from Caesar, himself. 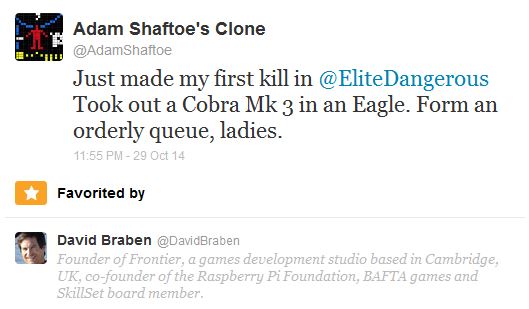