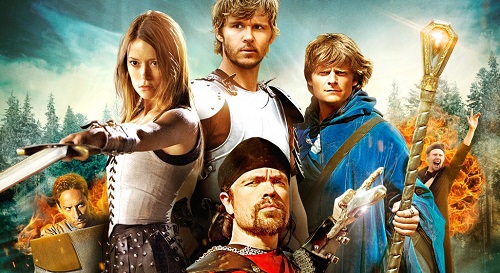 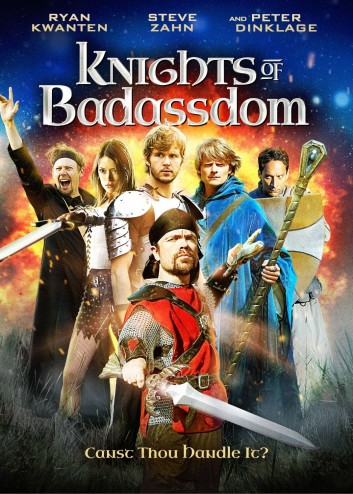 There is something to be said for a movie where all involved parties seem to know that what they’re working on won’t achieve any great narrative heights. I think this self-knowledge is important. Without a carefully measured effort to be a good B-movie, a production is likely to end up with Adam Sandler dressed in drag, making like a less funny Eddie Murphy. This is where the Knights of Badassdom excels. It knows that it is a solid brick of aged cheese, but it makes no pretension at being anything more than that, and for that reason, the movie works – albeit with a few caveats.

When broken down into component parts, Knights of Badassdom is both a celebration of a particular brand of low budget 70s and 80s horror and a knowing wink to nerd sub-culture. It’s not the first movie to explore young people abusing the occult with terrible consequences, nor is it the first to have a poke at the culture of Dungeons and Dragons or LARPing (Live action role play). Unlike 1982’s Mazes and Monsters, which convinced a generation of parents that tabletop role-play would lead to Chthonian insanity and murder-suicide (my parents included so fuck you very much, Rona Jaffe) KoB is mostly laughing with the audience rather offering up any sort of tut-tutting editorial. Indeed, half the fun of this movie is watching its cast of A and B listers goof around in armour and fight choreographed battles with foam weapons.

Without the likes of Peter Dinklage, Ryan Kwanten, Danny Pudi, and Summer Glau, all of whom play characters who are intentionally reminiscent of the characters who made each of these actors a household name, I don’t think the movie would work. Dinklage’s character spends most of the movie tripping balls. Kwanten plays a goof ball with a heart of gold. Pudi’s character fusses over the details of how many experience points his in-movie character will get for completing various quests. And, of course, Glau’s character is mysterious and all manner of kick ass.

In so many words, I now know what would happen if Tyrion Lannister, Jason Stackhouse, Abed Nadir, and River Tam got together for a game of Dungeons and Dragons. Once again, Knights of Badassdom doesn’t score a lot of points for originality, but it’s certainly not without some innate charms. Charms that, in fairness, are both a strength and a weakness as they only extend so far as an audience’s affection for nerd culture in general.

I don’t want to say that Knights of Badassdom requires a foreknowledge of D&D or role-playing games, but it certainly goes a long way to helping the jokes land. Even then, much of the comedy isn’t laugh out loud. Most of the gags revolve around the audience’s ability to look at a particular scene and go, “Yeah, I know that guy.” It’s not inclusive comedy in any sense of the word, but it knows its audience, and there’s something to say for a movie whose reach doesn’t exceed its grasp.

In the final calculation, Knights of Badassdom delivers exactly what it promises: a bunch of fan-favourite actors playing variations on their fan-favourite characters. It’s goofy, it has plot holes big enough to accommodate an elder dragon, and isn’t nearly as meta as it could be. It also has Ryan Kwanten and Peter Dinglage getting high as Keith Richards, and that has to be worth something. It won’t win any Oscars, but I don’t think that’s what it set out to do.  Like any ripe old cheese, some people will devour it with much avarice, while others will take one whiff and wonder why anybody would even bother.