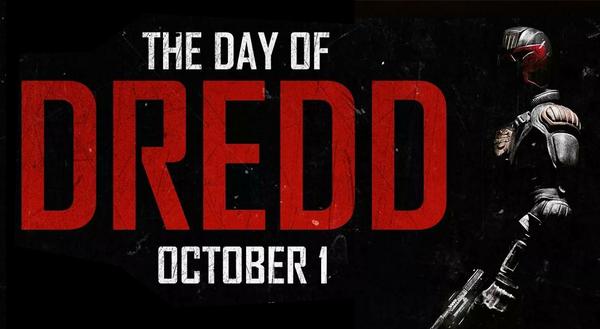 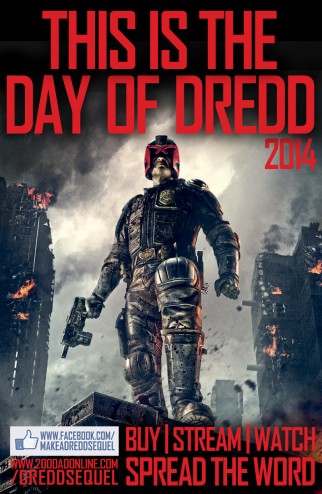 If you found yourself on twitter today, the chances are good that you saw somebody using the #DayofDredd hashtag. Rest assured, this is neither a typo nor a lamentation of October 1st as a day of planetary ennui. Instead, it’s a call to action for a sequel to 2012’s cult-classic in the making, Dredd.

Anyone familiar with my website knows that Dredd instantly became one of my favourite movies when it was released. In doing everything it could to align itself with the Judge Joe Dredd comic strip from 2000 AD, Dredd gave fans of Mega City One’s top-cop the movie that they’ve been wanting ever since 1995’s Danny Cannon directed Judge Dredd took a steaming dump on the collective hopes of an entire fandom.

As of this blog post, Box Office Mojo reports Dredd’s lifetime grosses at ~$35 million. The Numbers (.com) pegs the figure at ~$40 million with DVD and Blu-Ray sales of ~$17 million.  With the movie costing in the neighbourhood of $50 million to produce, Dredd isn’t exactly what movie producers deem a financial success.

The rationales behind the movie’s underperformance are various and sundry. Some people blame a poor marketing campaign. Others are apt to blame the fact that Dredd had 3D foisted upon it for the lack of audience draw. The elephant in the room of the blame game is, of course, Captain Codpiece.

What a shame to think that people didn’t go see Dredd because they were burned on Judge Dredd. Imagine what would have happened if people invoked that logic and avoided The Avengers because of Ang Lee’s Hulk.

Perhaps hoping for a Dredd sequel (or a Judge Anderson movie) is nothing more than a pipe dream. Even if the Dredd-heads of the world got #DayofDredd trending for an entire day, worldwide, it probably wouldn’t be enough to make a second film worth the potential financial risk. Be that as it may, there’s no reason not to watch Dredd if you fancy yourself a person who would like to see a post-apocalyptic version of Die Hard.

Still on the fence?

How would you feel about watching a movie where the female lead is a fully realized character and not some tedious sort of sex kitten meant to be an object of male power fantasy?

Multiply everything I just said times two because the film’s antagonist meets all of the above criteria.

This script, sets, and directing create a world that is genuinely bleak but still engaging. Judge Joe Dredd laughs in the face of Panem and your other barely-feasible, milquetoast dystopias.

And if all that isn’t enough for you, then you’re probably dead inside.

#dayofdredd may not get us a sequel, but if nothing else it’s a great way to spread the world about one of the best sci-fi movies of the last few years.