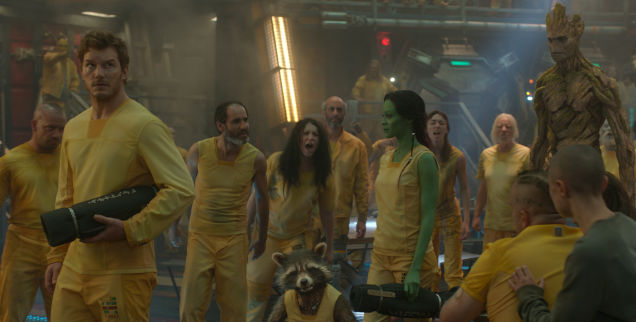 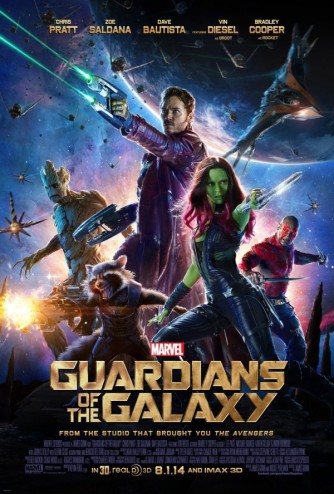 At the risk of being unpopular, I’ll begin this piece by saying that Guardians of the Galaxy isn’t a particularly brilliant movie. With its PG-13 rating, stock character archetypes, and a soundtrack that makes bored parents say, “Hey, that’s familiar, so it makes me more comfortable with this very alien, sci-fi affair,” I don’t think Marvel could have done more to make it clear they were shooting for the middle. Mission accomplished, Marvel. The writing is funny enough to make up for the poor pacing, and the acting is strong enough to make me overlook the fact that most of the characters are idiotic and shallow even by comic book movie standards. There is, however, one thing that I’m not quite so apt to overlook: Guardians’ use of the prison-industrial complex.

Planet Xandar is the seat of a seemingly liberal and open civilization. Likewise, the Nova Corps, though presenting a moral hazard as the fusion of military and police powers into one organization, are portrayed as a force for good. Dialogue from Rocket, a self-confessed criminal and bounty hunter, confirms as much when he says that 99% of the Nova Corps believe in justice. Now let us recall the words of Fyodor Dostoevsky and measure the Xandarians against how they treat their prisoners.

The Kiln, the prison from which the Guardians escape at the end of the movie’s first act, takes its inspiration from the worst recesses of contemporary incarceration. Though quippy dialogue keeps the reality of the Kiln from ever truly being felt, a quick enumeration of its horrors should call into question the nature of Xandarian justice.

It’s not looking very good for Xandar. Though ostensibly the good-guys, it’s clear the Xandarians have some work to do when it comes to dealing with their criminal element. I should note my analysis assumes things aren’t working exactly as the Xandarian government intends. Maybe this is what Xandar wants for its prisoners. In such a scenario we might also assume the Nova Corps rules as a military junta using drones, surveillance, and newspeak (recall that the Nova Corps won’t say asshole, despite running a space version of Manhattan Prison a la Escape from New York) to maintain their ersatz utopia.

If the Xandarians are intended to be a force for good, despite maintaining a prison that is a house of horrors, then a critical audience must take issue with Guardians’ credited screen writers, James Gunn and Nicole Pearlman.

One of the reasons why I put it to you that Guardians of the Galaxy proves a thoroughly average film is that whatever imagination went into the world as a whole is betrayed by its pedestrian, 20th century vision of a prison. This was a lazy creative vision, and it reflects a wholesale lack of effort in the storytelling. If Xandar has the martial and scientific ability to force a peace upon the Kree, then surely they are smart enough to use cryogenic suspension for violent offenders like Drax and Gamora. This dram of common sense undoes the prison break as written. Reason demands the Nova guards split-up the Guardians. This would make writing their escape a greater challenge – on the order of Oceans’ 11 – but also make it much more satisfying for the audience to watch. Instead, the entire escape sequence comes into play with Groot, while cribbing powers from Mr. Fantastic, pulling a thing out of the wall. Lazy, lazy, writing which allows the entire break-out to be summarized as, “some stuff happens after Groot grabs a thing.”

I dare say the prison break scene in Guardians calls for a new sort of narrative test, call it a Chekhov’s prison:

If a prison appears in a movie that is not about a prison break, then the protagonist(s) must break out of the prison by the end of the act it is introduced. Furthermore, they must do so in a way that doesn’t present the prison as woefully incapable of holding the protagonist. Failure to do so signals that the prison is little more than a narrative crutch. The Chekhov’s prison is heralded by a character saying, “there isn’t a prison built that can hold me.” Notorious examples include Watchmen, The Chronicles of Riddick, and X-Men 2.

Guardians of the Galaxy it looks great, it will make you laugh, but at the end of the day it’s not nearly as clever as people want it to be. The catalyst for the movie, the prison break which forces the Guardians to act as a team for the first time, is as contrived as it is ill-conceived. It functionally breaks any capacity for the audience to accept the Xandarians as the good guys. More importantly, it presents retrograde notions of incarceration to an audience, particularly an audience young enough to not notice the subtle coding (remember, it’s a family movie) as a wholly normal part of civilized life. It’s one thing to see Klingons running a gulag in Star Trek VI: The Undiscovered Country, it’s another to see it coming from a bastion of civilization.