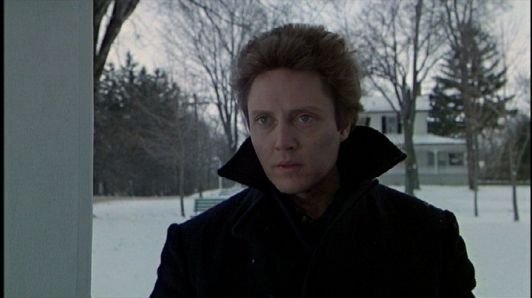 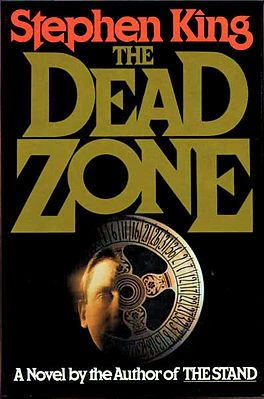 I recently discovered the joy of reading while exercising. In the past, attempts to read paper books while spending hours on an elliptical glider have resulted in abject failure. Some of these failures were more embarrassing than others; the details of those incidents remain classified.

When I bought a Kindle, some years ago, I assumed that reading it while exercising would only yield more embarrassing, and now expensive, results. It turns out I was wrong. E-reading at the gym is fantastic. It gives me an extra 4-5 hours a week of reading time, which had previously been dedicated to staring into the middle distance, as I tried not to look at the clock. That said, let’s talk about The Dead Zone.

The Dead Zone is a novel I was supposed to read in the 9th grade for a book report. Ever the scholar, I made like Jeff Winger and rented the Christopher Walken movie. At the time of this post, I’m about a quarter of the way through the book – it’s 1975 and Johnny just woke up from his coma. Though I was only a few pages into the book before Mr. King’s words give me serious pause for consideration. There is one moment within the novel’s opening chapter that says something profound about who we are as readers and North Americans. My enduring sense of guilt also demands I point out this happens roughly when thirteen-year-old Adam dismissed The Dead Zone as a “stupid romance novel,” and asked his parents to drive him to Blockbuster. I can’t believe they bought my line about doing a comparison between the book and movie.

The lead-up to Johnny and Sarah’s date offers more than an introduction to these characters. With my sympathies to Mr. King’s ego, this scene demonstrates The Dead Zone’s value as a historical artefact. Johnny, in 1970, reflects on the nature of college students amid the Vietnam War. He says there have likely never been so few “grunts” in the university than at that point in American history. Sarah, speaking on behalf of the reader, asks “What’s a grunt?” Johnny answers that a grunt is a person who attends a post-secondary institution solely for the degree. They want nothing more than access to the cozy, $10,000 a year job market.

Grunts don’t care about engagement on campus or the affairs of the world at large. Neither do grunts have a social or political conscience. Unlike Johnny, who held out some hope for graduate studies, the grunt tops out with a Bachelor’s degree. In short, they’re not at the university to think, they’re there to put in the minimum amount of work necessary to secure access to a certain socio-economic class.

This is where I draw upon my own experience working in academia when I say the exact opposite seems to be true now. My seven years as a teaching assistant afforded me first-hand experience with hundreds of undergraduate students. Perhaps one out of twenty of those students thought about their degree as something other than a ticket to getting a good job (joke’s on them for thinking that a history degree is going to make life easy after graduation). Don’t even get me started about the lack of political engagement, as measured by straw polls asking students, “Who voted?” amid provincial and federal elections. Okay, I’m straying dangerously close to “kids these days/get off my lawn” territory.

In reflecting on this stark contrast I feel like I have to own some part of the blame for perpetuating the current state of affairs. I’d often be asked, “How do I get an “A” on my paper?” My stock answer was, “follow the directions in a competent manner and you’ll get a solid “B”. To get an “A” you need to be better than competent.”

My university experience, as both student and teacher, was about following the rules, colouring in the lines, and falling into step with the program. The few revolutionary types that I knew as an undergrad collected shitty grades because they wanted to rage against the machine in their written work. Most of them ended up washing out. When confronted with the same as a TA, the renegades who thought that they could change the world by not doing the assignment as posted, I perpetuated the system and offered marginal grades. When I dared to give truly shitty papers the grades they deserved, faculty rapped my knuckles and told me to be more generous in my grading.

“Do you have to fail them, Adam? Couldn’t you give them a 55? You know that if you do give them a 30 they will be in my office complaining about how they are entitled to a passing grade.”

Knowing that my very precarious job depended in part upon the largess of the faculty, I got with the program and inflated the shitty grades.

We’re all grunts now, Mr. King. A hundred different things have turned us into grunts. One generation told another that a university degree would lead to a good job. Now we have degree holders slinging coffee for want of white collar work. PhD’s are a dime a dozen, and their fights for tenure-track positions in the face of growing sessional contracts borders on spectacle. In the forty years since Johnny Smith went to school, we’ve broken the post-secondary system, and I’ll be damned if I’ve seen any good ideas on putting it back together again.

So let’s add this vision of the university experience, even if it is an idealized one, to the growing list of reasons why people should be reading Stephen King’s back catalogue. Even if I had read The Dead Zone like I was supposed to, 20 years ago, there’s no way I would have been able to take away anything like what I’m getting now.